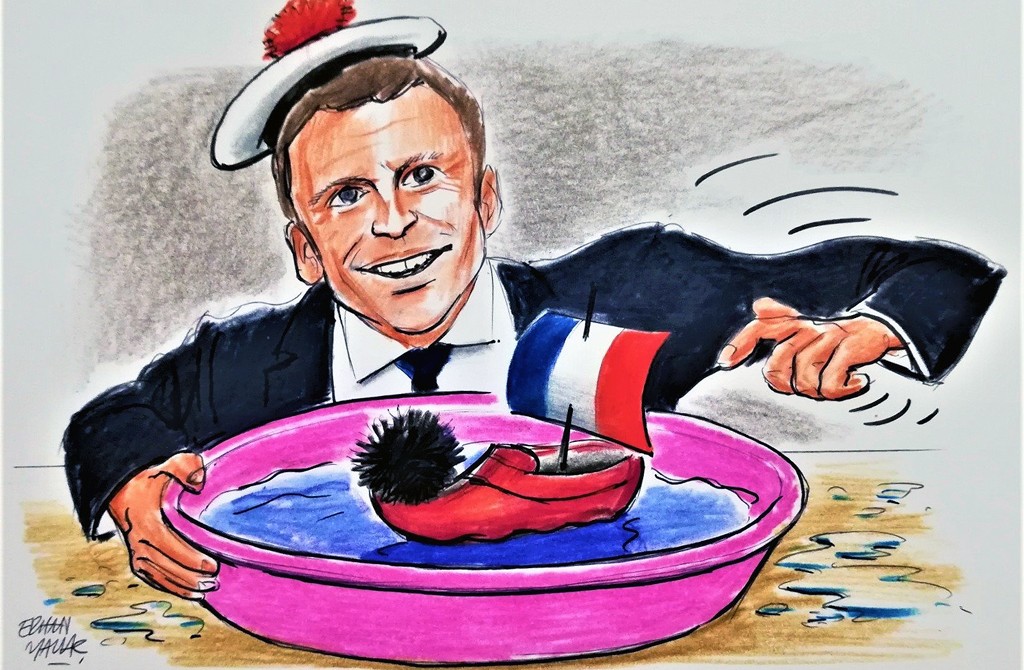 Tensions in the Eastern Mediterranean are escalating anew to dangerous levels. Turkey responded to a Greek-Egyptian maritime agreement, which undermined Germany’s mediation efforts, by dispatching the research vessel Oruç Reis, alongside frigates, to the Mediterranean Sea. The Greek military consequently went into high alert.

Tensions in the Eastern Mediterranean are escalating anew to dangerous levels. Turkey responded to a Greek-Egyptian maritime agreement, which undermined Germany’s mediation efforts, by dispatching the research vessel Oruç Reis, alongside frigates, to the Mediterranean Sea. The Greek military consequently went into high alert.

Athens believes that the area, which was subject to a recent Navtex (navigational telex) by Turkey, falls within its own continental shelf. Ankara, however, rejects the claim that islands – particularly, Kastellorizo (Megisti-Meis) – have no continental shelf.

France, too, plays a prominent role in the escalation over the delimitation of maritime jurisdictions in the Eastern Mediterranean. The country just deployed military jets to the Greek-administered part of Cyprus and held a joint military exercise with Greece. In what seems to be an attempt to avenge his humiliation in Libya, French President Emmanuel Macron encourages Greece to further escalate tensions with Turkey.

By contrast, German Chancellor Angela Merkel desperately tries to defuse the situation through shuttle diplomacy between President Recep Tayyip Erdoğan and Greek Prime Minister Kyriakos Mitsotakis. Merkel, however, was embarrassed by the Greeks, who, Erdoğan had warned her, were not trustworthy. A day before the German-brokered exploratory talks between Turkey and Greece, the latter, without informing Berlin, concluded a maritime borders agreement with Egypt to establish an exclusive economic zone (EEZ).

Despite the Greek side’s acts of provocation, Erdoğan insists on giving diplomacy a chance. As a matter of fact, the Turkish president just made public his proposal for all littoral states to come together and negotiate a fair allocation of maritime jurisdictions. Both that proposal and Merkel’s diplomatic efforts deserve support from members of the European Union. By attempting to form an anti-Turkish front, Macron not only undermines the German chancellor but also shows the world why the European Union still lacks a coherent foreign policy. He thus drags the organization, which was sidelined in the Syrian and Libyan crises, into new levels of powerlessness. Macron also roots for endless conflict in the Eastern Mediterranean to prove that the EU is simply incapable of developing a “grand strategy.”

To call an emergency meeting of the EU and decide to use sanctions and the navy, rather than words, at Greece’s request, would send a negative and wrong message to Turkey. There is no doubt that the Turks will resist efforts to limit their maritime jurisdiction to the Gulf of Antalya with everything they got.

The current challenge goes beyond party politics. If members of the EU exclude Turkey, they will generate a new question of national survival. If they don’t take Erdoğan’s hand, despite the Turkish leader’s insistence on dialogue and diplomacy, the Turkish people will start talking about hard power.

Tensions over the Eastern Mediterranean, with Libya at one end and Cyprus and Kastellorizo at the other, could inform all aspects of Turkey-Greece relations. They could turn into a perfect storm, affecting disagreements over the Aegean Sea, the militarization of the islands, the status of the Dodecanese Islands and Western Thrace. In other words, competition in the Eastern Mediterranean could uproot the problematic status quo in the Aegean.

The possibility of a hot conflict between two NATO allies makes the Eastern Mediterranean an increasingly important item on the world’s political agenda. To be clear, the matter at hand is not limited to competition between Turkey and Greece over the Aegean, Cyprus and the Eastern Mediterranean. The potential involvement of global and regional powers could create a geopolitical black hole sucking in the Middle East, North Africa and Europe. Instead of going down that path, the world should opt for a fair allocation of resources and stability through cooperation.

UAE and Israel: Normalization or formalization?
Next
Loading...
Loading...
We use cookies to ensure that we give you the best experience on our website. If you continue to use this site we will assume that you are happy with it.Ok