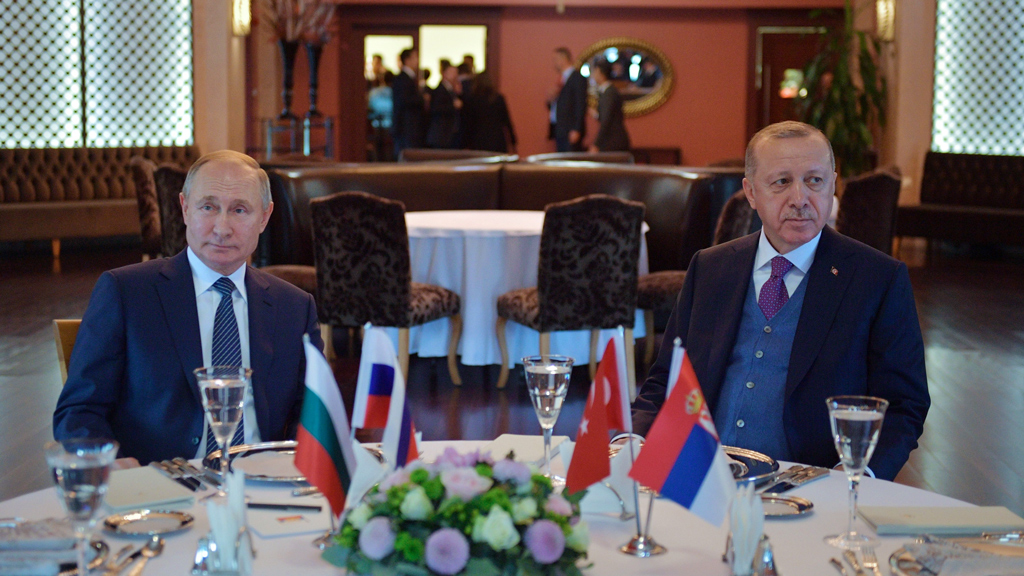 Libya, Idlib and the Turkey-Russia partnership

With tensions between Iran and the United States de-escalating for now, there is talk about cease-fire agreements in Libya and Idlib.

With tensions between Iran and the United States de-escalating for now, there is talk about cease-fire agreements in Libya and Idlib.

Both deals predate Turkish President Recep Tayyip Erdoğan’s Jan. 8 meeting with his Russian counterpart, Vladimir Putin. Attacks on Idlib’s civilian population by the Bashar Assad regime, which enjoys Russian and Iranian support, pushed some 300,000 people to the Turkey-Syria border over the last two months. In Istanbul, Erdoğan and Putin reiterated their commitment to fully implementing the September 2018 and October 2019 agreements.

The Idlib cease-fire officially began on Jan. 12. We know its long-term preservation is an uphill battle. However, keeping in mind that Iranian-backed Shiite militia forces played an active role in Assad’s latest attacks, one could argue that escalating U.S.-Iran tensions over the assassination of Qassem Soleimani may have resulted in the easing of tensions in Idlib. Still, let us remember that Assad’s ultimate goal is to capture Idlib.

Erdoğan and Putin nonetheless called on all parties to stick to common sense and diplomacy vis-a-vis the U.S.-Iran tensions. That emphasis suggests that Ankara and Moscow could be more inclined than before to cooperate regarding Middle Eastern conflicts – including the situation in Iraq. The two leaders’ joint call for a cease-fire in Libya, where they hope to jump-start the political process, was significant in that regard.

Turkey and Russia, acting as intermediaries, proposed that the cease-fire would enter into force on Jan. 12, midnight. Libya’s U.N.-recognized Government of National Accord (GNA) accepted the offer, whereas Khalifa Haftar, the coup plotter, rejected the deal to attack Tripoli and Misrata. The latter’s objective is to capture the Libyan capital before participating in upcoming negotiations in Berlin, Germany. Haftar, who relies heavily on Russian mercenaries, is unlikely to turn down Vladimir Putin’s proposal. If Moscow means to keep its promise, Haftar’s forces will continue their attacks until Jan. 12 and proceed to respect the cease-fire.

This is a critical time for Tripoli and Misrata. The cease-fire may prove “fragile.” Khalifa Haftar, who already violated two cease-fires, needs a stern warning from the Russians. Turkey and Russia have a peculiar way of working together that involves continued competition. We have seen it within the framework of the Astana process.

This time around, Libya is the top item on their agenda. Seeing that there can be no military solution to the Libyan crisis, Ankara and Moscow will work on the content of the two leaders’ cooperation framework ahead of the Berlin talks. Foreign Minister Mevlüt Çavuşoğlu, Defense Minister Hulusi Akar and intelligence chief Hakan Fidan will be in the Russian capital today. Obviously, Erdoğan and Putin will have to sign off on the final draft.

Regardless of Haftar’s view, serving as an intermediary, together with Russia, is a major diplomatic accomplishment for Turkey. Moscow’s new position won’t sit well with Egypt, Greece, France or the United Arab Emirates.

Ankara and Moscow serving as intermediaries in the Libyan conflict alarmed the Europeans as well. Europe’s governments do not wish to be sidelined in the Libya talks. Italian Prime Minister Giuseppe Conte will, therefore, visit Ankara today. Meanwhile, German Chancellor Angela Merkel will speak with Putin and Erdoğan.

Turkey and Russia do not play a more active role in the diplomatic arena regarding Libya alone. They have a military footprint on the ground as well. Hence Europe’s concern about losing Libya to Turkey and Russia. Indeed, Italy and Germany are taking the right diplomatic steps. The Libyan civil war is key to Europe’s efforts to combat terrorism, human trafficking and the refugee crisis. If the Europeans become irrelevant in Libya – as they did in Syria – Turkey and Russia will become even more influential. Italy, Germany and the U.S. can contribute to a political solution by moving to protect the GNA.

Western governments, which were too late to cooperate with Turkey, might have more to worry about Libya down the road than Turkish-Russian cooperation.

The new reality in the Middle East
Previous

Is it possible to protect the cease-fire in Libya?
Next
Loading...
Loading...
We use cookies to ensure that we give you the best experience on our website. If you continue to use this site we will assume that you are happy with it.Ok