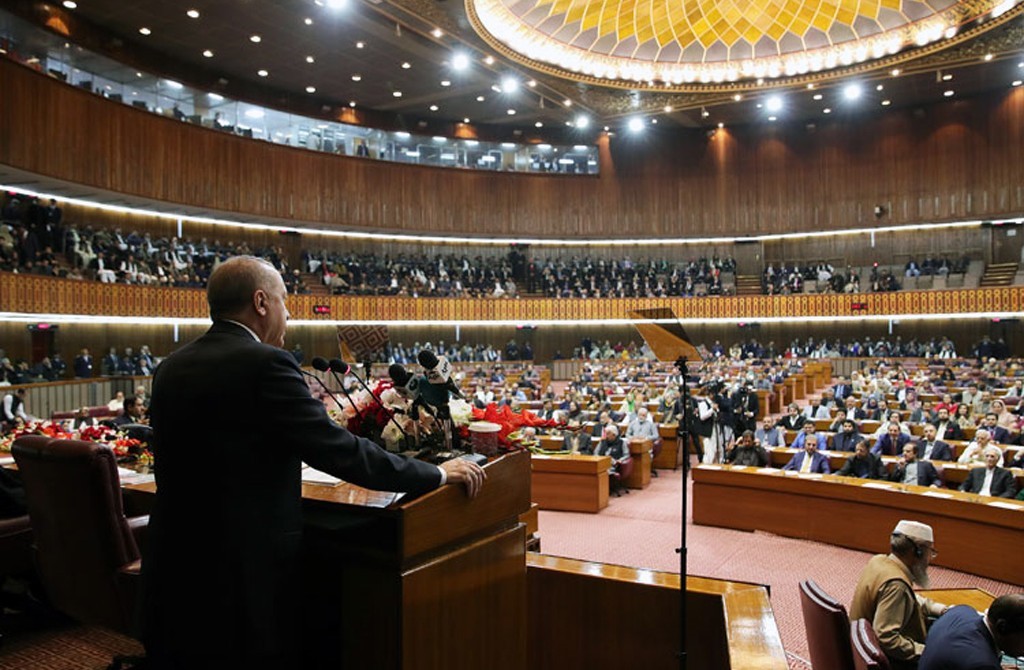 President of Turkey Recep Tayyip Erdogan attends a joint session of National Assembly and Senate in Islamabad, Pakistan on February 14, 2020.

Turkey and Pakistan have always had a particularly close relationship. During the Turkish War of Independence, India's Muslim community contributed to the war effort. That affinity evolved into a deeply-rooted fraternity upon the foundation of the Islamic Republic of Pakistan.

President Recep Tayyip Erdoğan visited Pakistan last week to attend the sixth meeting of the High-Level Strategic Cooperation Council. Turkey and Pakistan have always had a particularly close relationship. During the Turkish War of Independence, India’s Muslim community contributed to the war effort. That affinity evolved into a deeply-rooted fraternity upon the foundation of the Islamic Republic of Pakistan.

Yet Erdoğan’s visits to Pakistan tend to spark a different kind of excitement than other Turkish leaders. This is because Muslims around the world follow the Turkish president’s statements and actions very closely. Let’s not beat around the bush: Erdoğan was greeted at Pakistan’s parliament as the leader of the Islamic world. He delivered a speech, starting with the Bismillah (in the name of God), which parliamentarians passionately endorsed by knocking on their desks. Their excitement was not limited to Erdoğan’s open support for the Kashmir cause either. Instead, it was about his performance as a leader throughout his political career.

Erdoğan started his address to the Pakistani parliament by invoking the Mughals and the Ghaznavids, which represent part of Turkey and Pakistan’s shared history. He made references to a massive rally in Lahore during the Battle of Gallipoli, recalled how Muslim women had donated their jewelry to assist the Turkish War of Independence and paid homage to Muhammad Iqbal. The Turkish president stressed the close relationship between the two countries by saying that Kashmir today was what Gallipoli was in the past. Recalling the principle that all believers are brothers and sisters, Erdoğan pledged to “preserve that eternal brotherhood forever.” He stressed that differences in sects, tribes and language could not trump that “global fraternity” and reiterated Turkey’s commitment to “alleviate differences of opinion within the ummah (community) and support all legitimate causes.” Erdoğan’s remarks at Pakistan’s parliament indeed set him apart from the rest of the politicians in the Islamic world.

Erdoğan is an exceptional leader, and people around the world listen to him closely. He does not refrain from weighing in on critical issues or taking initiative. On the one hand, he criticizes the unjust order that prevails in the world today. On the other hand, he speaks for the oppressed peoples and Muslims around the globe – whether they are in Myanmar, Kashmir, Syria, Palestine or Somalia. If necessary, Erdoğan speaks openly about the mistakes of the United States and other great powers – as he did about Jerusalem and Palestine. He does not stop at criticism either. In recent years, Turkey became a world leader in humanitarian assistance. The country mediated many crises and on other occasions, sided with the righteous side – even if mildly. Erdoğan distinguished himself as a leader starting with the 2009 World Economic Forum, where he criticized Israel’s policy of occupation. He builds on that momentum by involving himself in international crises.

In my opinion, Erdoğan sets an example in the eyes of many people around the world, and he will be used as a point of reference for decades to come. He started by fighting against the domestic guardianship regime to promote civilian politics in Turkey. Then, he cracked down on groups like FETÖ, which outside powers used to meddle in Turkey’s internal affairs. Finally, Erdoğan pursued an autonomous and active foreign policy to protect Turkey’s national interests. His autonomy from the Western alliance and in other cases, his search for new forms of cooperation were met with surprise. His ability to have a seat at the great powers’ table and to criticize them received much appreciation. People noticed the Turkish president for his political style, which blended the national interest with the welfare of the ummah. Needless to say, his audacity entailed many risks and challenges to his rule. Especially since 2013, Turkey encountered turbulence, emanating from the outside, as well as a labeling campaign in the international press. Erdoğan’s leadership, which challenged conventional wisdom, came to be defined by various smears – which did not weaken Erdoğan’s popularity. The Turkish president took immense risks at a time of regional and global turbulence to move his country forward. If anything, his ability to overcome challenges and bring about a major transformation in Turkey amazes people.

Erdoğan’s leadership is a case that will be discussed for a long time. His example will create a legacy for politicians at home and abroad.

Who cares about human rights violations in Idlib?
Next
Loading...
Loading...
We use cookies to ensure that we give you the best experience on our website. If you continue to use this site we will assume that you are happy with it.Ok