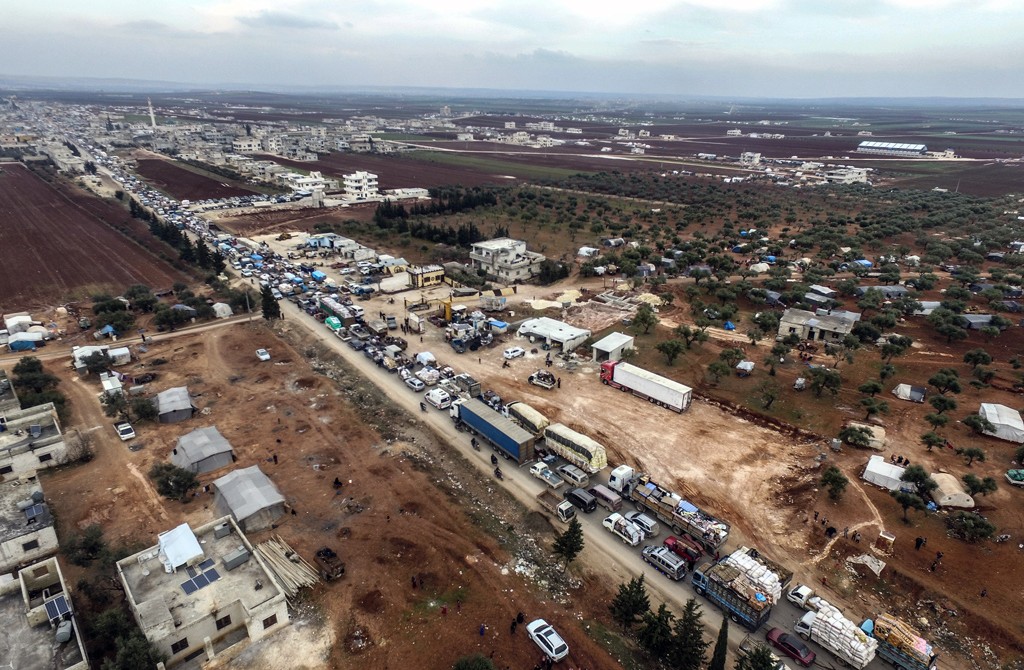 A drone photo shows a view of Syrian civilians' convoy, who are being forcibly displaced due to the ongoing attacks carried out by Assad regime, Russia and Iran-backed groups, and are on their way to safer zones with their belongings near Turkish border, in Idlib, Syria on February 5, 2020. The ongoing attacks by Bashar al-Assad regime in Syria and its allies forced civilians to flee their homes in Idlib, a de-escalation zone in northwestern Syria. Around 150.000 more civilians have left their homes in Idlib de-escalation zone in northwestern Syria over the last days due to attacks by regime forces and their allies.

Who cares about human rights violations in Idlib?

The Syrian crisis is one of the best examples of this approach. The Bashar Assad regime has killed more than half a million innocent civilians by using prohibited weapons of mass destruction, including barrel bombs and chemical weapons..

The United States established the global system after World War II and has been following a hegemonic policy since then. However, especially after Donald Trump came to power, the U.S. has been determined not to act as a hegemonic power. It seems reluctant to provide the main global public goods like international security and peace, and also free trade. Today, the U.S. and other global powers are less concerned about the violation of the fundamental principles of international law, including human rights.

The Syrian crisis is one of the best examples of this approach. The Bashar Assad regime has killed more than half a million innocent civilians by using prohibited weapons of mass destruction, including barrel bombs and chemical weapons. Even though the Obama administration had declared the use of chemical weapons as a red line, it only carried out limited retaliatory attacks to punish the regime. The U.S. and other global powers also failed to prevent the regime from carrying out further attacks.

Nowadays, the Assad regime, backed by Russia and Iran, has been attacking innocent civilians, mostly children and women who are not part of the conflict, killing them and forcing them to escape from the inhabited areas to the north. More than 3 million civilians face two choices: either to stay where they are and be targeted by the regime’s lawless and undisciplined troops or to escape from the attacks and head toward the mountains in the freezing cold. Dozens of civilians froze to death under the olive trees in the last few weeks. Hundreds of thousands of civilians are forced to live in the mud and cold without food or shelter.

The only country that seems to care about these civilians is Turkey and its benevolent people. The state and non-state institutions are united and mobilized to provide food and shelter to these people to protect them from the cold and hunger, as they did before for Somalia, Palestine and the Rohingya.

However, the rest of the world remains silent against the human tragedy going on in Syria. All global and regional powers are only concerned about the possible negative implications of the crisis. Considering their positions, it can be understood that all these actors remain indifferent to mass killings and crimes against humanity. While some countries are trying to take Omar al-Bashir, the former president of Sudan, to the International Criminal Court (ICC) due to similar crimes committed in Sudan, they remain indifferent to the crimes being committed by the Assad regime.

The past record of the two main allies of the Assad regime, Russia and Iran, says enough. Russia prefers to solve what it calls a domestic crisis by carrying out indiscriminate attacks targeting criminals and civilians alike. Iranian troops and pro-Iranian militias, Hashdi Sha’bi groups in Iraq and Shia militia groups in Syria tortured and killed thousands of civilians in Iraq and Syria. Ironically, they declared that they will avenge Iranian Gen. Qassem Soleimani’s killing by taking the lives of innocent Syrian civilians. Pro-Iranian militias write the Iraqi commander’s name on missiles and other weapons used during their attacks against Syrian civilians.

The U.S. and other Western countries diplomatically condemn the mass killing and targeting of civilians in the Idlib region but do nothing on the ground. The U.S. government mainly concentrates on the area east of the Euphrates. European countries fail to take any action against the assaults, their only concern being the possibility of a new wave of refugees that may head toward Europe. The West could impose further sanctions against the three actors involved in the assaults.

Lastly, Arab countries led by the Gulf have been following a policy similar to that of Iran in Syria. While Arab countries consider Iran as the main source of threat against Arab people, they continue to support the same actor in the Syrian crisis. These Arab countries prefer to harm the Syrian opposition and Turkey rather than supporting their Arab brothers. With the exception of Qatar, stable Arab countries do not want to help Syrian civilians in any way. This can be considered the end of the political Arab world. As a result, Arab states only contribute to the chaotic Middle East region. This reluctant policy will damage not only the image of pan-Arab solidarity and nationalist feelings but also the security of other Arab states in the middle and the long term.

5 Questions: Citizenship Amendment Bill in India
Next
Loading...
Loading...
We use cookies to ensure that we give you the best experience on our website. If you continue to use this site we will assume that you are happy with it.Ok