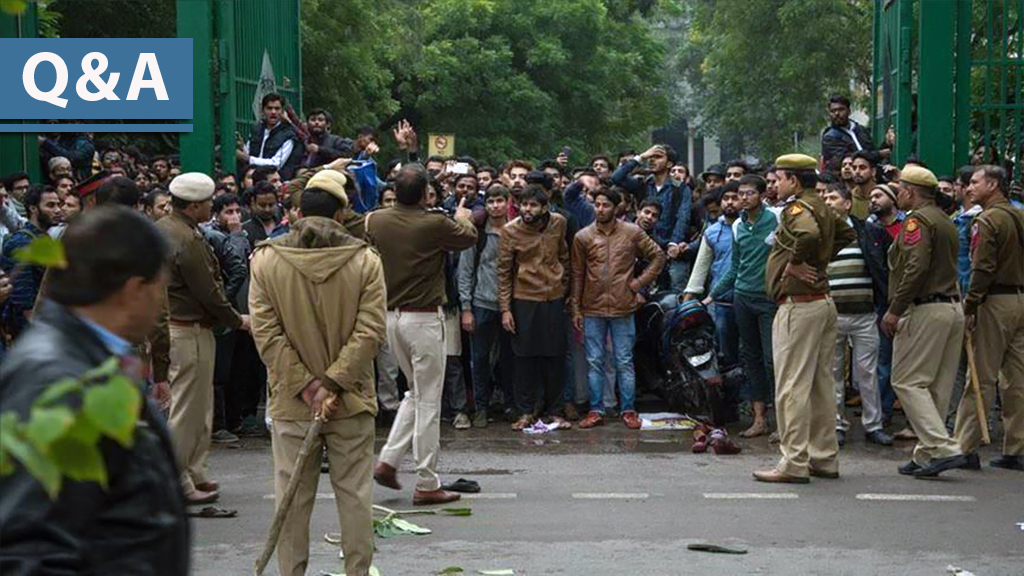 The Citizenship Amendment Bill (CAB), now the Citizenship Amendment Act (CAA) of 2019, is a modification to India’s Citizenship Act of 1955, under which a person was granted citizenship in four ways, namely by birth, by descent, by registration, or by naturalization. The CAA has modified the provisions and procedure of this earlier act that are related to the granting of citizenship by naturalization. Prior to the enactment of the CAA, any legal migrant who was residing in India for an aggregate period of at least 12 years from the date of application became eligible to be considered for Indian citizenship. Pertinently, this eligibility was in no manner linked to the religion of the migrant seeking Indian citizenship. The reasoning employed (by the current government in India) for the enactment of the CAA is that it would ease the granting of Indian citizenship to undocumented immigrants with the noted exception of Muslims. It is further reasoned that the controversial Citizenship Amendment Bill (CAB) will fast-track citizenship for (deemed as persecuted) religious minorities, including Hindus, Sikhs, Buddhists, Jains, Parsis, and Christians, from Afghanistan, Bangladesh, and Pakistan.

Opposition parties in India refer to the bill as unconstitutional as it bases citizenship on a person’s religion. The bill is an infringement of the Indian constitution, which, under Article 14, guarantees not just “equality before the law” but also “equal protection of the laws” of the country. Furthermore, Article 15 prohibits the state from discriminating against any citizen on grounds of religion, race, caste, sex, or place of birth. This bill would further marginalize India’s 200-million strong Muslim community who are already enduring a religious persecution to the extent of being treated as second-class citizens. The new bill will escalate this even further to casting their political and social existence as irrelevant under the current (right-wing Hindu) dispensation.

Though the government, ruled by the extreme right-wing Bharatiya Janata Party (BJP), said the bill seeks to protect religious minorities who fled persecution in their home countries,this claim is weak as the BJP has a totally different approach towards the religious minority of Myanmar who fled persecution in their home country. The bill is considered a very dangerous piece of legislation because it amounts to a destruction of the very character of the Indian state and its constitution.

Since 2014 when the BJP came to office, the Muslim minority of India has been facing many vulnerabilities relating to the existence of its members as equal citizens. The concept of Hindu-Rashtra (a state exclusively for Hindus) and the subsequent attempts at homogenization or annihilation of identities towards achieving this goal have largely informed the recent politics of the current right-wing government. The kind of cultural oppression extended specifically to a large Muslim population explains the Islamophobic nature and intent behind this enactment. This act is preceded by a series of dreadful instances of Islamophobia including mob lynching, whereby a number of Muslims were killed by angry mobs on mere suspension of carrying or eating beef, and intrusion into Muslim religious matters. Examples of the latter include the recent legislation on issues like triple talaq (divorce law) or the recent verdict (Babri Masjid Verdict) of the Supreme Court of India which granted the ownership of land at Ayodhya in the Indian state of Uttar Pradesh in favor of the majoritarian Hindu population and justified the construction of a Hindu temple over the mosque, or the abrogation of Article 370 and 35(A) which gave a special autonomous status to the only Muslim-majority state of the disputed Jammu and Kashmir. Similarly, radical Hindu fringe groups are describing interfaith marriages as “love jihad.” The term is used by these right-wing groups to accuse Muslim men of participating in a conspiracy to convert Hindu women  to their religion by seducing them. The use of the term has spread on social media with the rise of the Hindu nationalist party of Narendra Modi, at a time when religious hatred is growing in India.All these constitutional arrangements are Islamophobic in nature as is evident in the definition and rationale provided by the government, and most importantly by the negative response the bill has received in the Indian society and polity alike. The recent amendments are directly affecting the Muslim population of India and are hugely informed by Islamophobia. An example of the spread of Islamophobia in India through this law is a recent speech by the Prime Minister of India where he expressly demonized the protesting population by saying that the “mess-mongers” – i.e. the enemies/illegal migrants identifiable by their clothes or visible Muslim identity markers such as the hijab (face-cover), and naqab (veil), and topi (skullcap) – will not be spared.

The Office of the UN High Commissioner for Human Rights has criticized the bill for being “fundamentally discriminatory” while the United States’ federal Commission on International Religious Freedom has called for sanctions against the Home Minister of India and other top leaders for “creating a religious test for Indian citizenship that would strip citizenship from millions of Muslims.”

The Citizenship Act of 1955 did not make the religion of an applicant a criterion to obtain Indian citizenship. But the Amendment Bill/Act (CAB/CAA) enlists the religion of a subject and excludes Muslims from being eligible for citizenship. This law clearly excludes Muslims, is discriminatory, and features an anti-Muslim racism in its substance and procedure. There are systemic prejudice and ongoing manifestations of hatred against Muslims in India after the right-wing government came into power. It is considered a win by the Hindu fanatics who dream of an exclusive bellicose Hindu nationhood for India and has already manifested in various parts of India in the form of aggression and violent anarchist dominance against Muslims living in Hindu-dominated areas.

In the aftermath of the mass killings of Muslims in Gujarat in 2002, the Hindutva (an ideology seeking to establish the hegemony of Hindus and the Hindu way of life) organizations and the leaders of the RSS and BJP are more direct, declaring that they will wash away Muslims from the country. Muslims are being targeted by the RSS and BJP forces. These amendments are not just marginalizing Muslims but also initiating a number of symbolic gestures such as renaming towns with Hinduized names to wash out India’s Muslim culture. The ongoing violence against the Muslim minorityby the right-wing forces in tandem with the state agencies and police, and the extreme ghettoization of Muslims in India have intensified after this enactment and have already left a number of people dead (40-50) and thousands injured.

Anti-CAA/NRC protests have been held by Muslims across the country. Muslim organizations are coming closer and they are fighting democratically against these amendments. The Citizenship Amendment Law/Act is an attack on Muslims, and Muslims have taken to the streets to fight and safeguard their membership in Indian society. Muslims consider the NRC and CAA a state tactic to eliminate the Muslim population. The first protest in India against these amendments began by the students of Aligarh Muslim University, Uttar Pradesh, where about 25,000 students organized a sit-in and hunger strike to oppose the bill on the day it was scheduled to be tabled in the Indian parliament. Muslims are taking to the streets, proudly displaying their visible Muslim identities to demand that Muslims have an equal stake in India. The Muslim minority in India is currently rebelling and fighting against an authoritarian plan of a cultural assimilation which is being imposed on them by means of employing the state’s legal-judicial apparatus. The current Muslim response is beyond the permutations and combinations of political parties and domestic politics. It is a struggle of existence for a religious identity within a currently hostile Indian government. Muslims woke up to the awareness that their existence is under threat in India and are protesting using religious and community slogans to assert their identity positively. Muslim-minority collectives have  stepped up to the circumstances throughout the states in India and are vehemently rejecting the enactment of the CAA and are demanding an egalitarian acceptance within the Indian state as promised by the Indian Constitution.

The opposition parties in India have issued statements against this bill. The statement issued by 12 opposition parties states that the bill is against everything the country’s founding fathers envisioned. Rahul Gandhi, the head of the main opposition party Indian National Congress (INC), opposing the move said, “The Congress party is against any form of discrimination against anybody in this country. So anybody who discriminates against anybody who is Indian, we are against them. That is our line. We believe that India belongs to everybody – all communities, all religions, and all cultures.”

The liberal and secular class of Indian society has opposed this move but there is no sign of mass movement or agitation by the secular and liberal sections of Indian society against the discriminatory law. The sense of soft Hindutva is considered to be the new norm of Indian society which since 2014 elected an extreme right-wing party to power twice.

The right-wingers of India have a plan to transform India into a Hindu state where Muslims or other non-Hindu identities/subjects would have to live as second-class citizens without equal rights. This new Hindu state would be replacing the secular democratic Republic of India. The ideology and politics of the ruling BJP government aim at an Islamophobic marginalization or an annihilation of Muslims and non-Hindu entities on socio-economic and political fronts, and to achieve homogeneity based on the concept of Hindu Rashtra. The Rashtriya Swayamsevak Sangh (RSS) – the fanatical Hindu umbrella group of right-wing collectives in India – and its political wing, the BJP, believe in the idea that all Indian citizens are not equal and that Hindus should have the first right to all resources and constitutional offices as India is primarily a geography belonging exclusively to Hindus. They also believe that India is essentially a Hindu civilization and that the rest of the religious minorities in the country have migrated from elsewhere. They define India’s civilizational ethos solely on the basis of religious and caste identities. The Hindu Rashtra (Hindu state) is the core idea of the BJP and RSS. From the demolition of the Babri Masjid to the scrapping of Article 370, and from the calls for a Universal Civil Code to the Citizenship Amendment Bill, all these issues are part of Sangh Parivar’s long-term goal: determining Indian citizenship through religious identities. Since Muslims have been at home in India for more than a millennium and are seamlessly integrated, under the effective RSS rule, India is trying its hardest to alienate, disenfranchise, disintegrate, and finally annihilate its Muslim  population. The CAA is yet another step by the BJP in this direction.

Who cares about human rights violations in Idlib?
Previous

Is Russia a friend or foe in the Middle East?
Next
Loading...
Loading...
We use cookies to ensure that we give you the best experience on our website. If you continue to use this site we will assume that you are happy with it.Ok