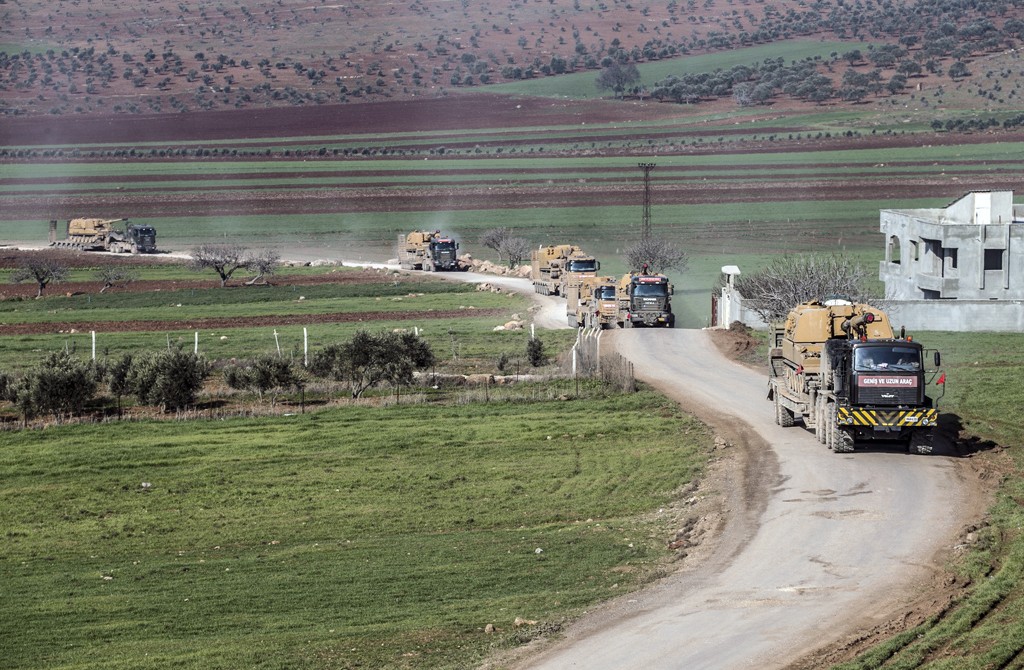 Turkish Armed Forces' reinforcements, including howitzers, tanks, ammunition, armored construction machines and other military vehicles, are being deployed to Syria border on February 17, 2020 as they pass through Reyhanli district of Turkey's Hatay.

Turkey's objectives amid the recent tensions in Idlib are clear and the scope of a possible military operation would be limited..

Turkey’s objectives amid the recent tensions in Idlib are clear and the scope of a possible military operation would be limited. Turkey wants the formation of a protected humanitarian zone in the Idlib area to prevent another humanitarian catastrophe and stem the flow of refugees to Turkey’s border. In the last several years, the Turkish authorities frequently reiterated their support for the formation of a safe zone. International actors were interested in the idea but no actor was ready to provide practical support for the safe zone in Syria. Such material support could have generated political and military tension with Moscow.

The second and more important objective of Turkey’s recent escalation with the Assad regime and Russia is to keep a political solution to the Syrian civil war on the table. The attacks by the regime and Russia in the last six months are undermining a political solution to the Syrian crisis. Moscow insists on a military solution for Syria and wants to take control of the key strategic highways and depopulate the opposition-controlled areas.

The Assad regime does not want to recognize the opposition groups in Syria as partners of political negotiations. The Assad regime and Russia will do their best to make sure the pro-opposition groups will not be able to return to Syria after the victory of the regime. This plan aims to keep more than 10 million Syrians in Turkey, Jordan and Lebanon, and to exclude the population around Idlib from Moscow’s plan for “the new Syria.”

The Russian and Iranian sides are rushing to consolidate their gains on the Syrian field. Turkey is aware of the fact that without a political change the Syrian refugees in Turkey will not return to their homes in Syria. The regime side will not compromise to incorporate them into the political and economic system in Syria.

A negotiated political solution to the Syrian civil war will be off the table if the regime takes control of Idlib. The lack of a political solution means the impossibility of the return and re-integration of half the population of pre-war Syria. This will be a permanent economic burden and a source of instability for Turkey, Jordan and Lebanon.

There is already rising popular unrest in Syria, especially in the border areas where the Syrian refugees are concentrated. Turkey does not have the resources to accommodate Syrian refugees indefinitely. Moscow and the Assad regime are trying to benefit from Turkey’s vulnerabilities due to Turkey’s humanitarian concerns. Iran-sponsored Shiite militias, on the other hand, persistently continue their sectarian cleansing campaign.

President Recep Tayyip Erdoğan warned the Syrian regime over its violation of the Sochi deal. If the regime does not withdraw behind the lines of the Turkish observation points, it will become the target of Turkish forces in the field. The regime and the Russian side plans to encircle and threaten the Turkish observation points in order to deter Turkey’s military response to the violation of the Sochi deal.

The situation on the field signals that such a miscalculation for the regime may be costly for the regime and possibly for Turkey, as well. The regime’s attacks to capture Idlib may lead to further losses in other places as well. The Assad regime may eventually sit down and re-engage in a political process in this weakened position if Turkey intervenes in full-scale military operations.

Trying to focus on just a military solution to the Syrian crisis may be against the long-term interests of Moscow. The Russian side may gradually lose all of its influence on Turkey. Turkey may eventually acquire alternative long-range air defense systems or find alternative sources of natural gas, but Moscow’s influence over Ankara would decline drastically. As Russian Foreign Minister Sergey Lavrov and other high ranking Russian officials’ remarks demonstrate, the Russian side underestimates Turkey’s determination in the recent tension.

Washington has not signaled any military support for Turkey in the case of a military confrontation with the Syrian regime over the Idlib tension. Diplomatic support may be useful but may not be sufficient to deter Moscow from further escalating the situation in Syria. Washington seems to be happy about its current status quo in Syria and does not want to risk the situation in support of its NATO ally Turkey.

If the tension between Turkey and the Syrian regime escalates, the NATO side may be forced to get involved in the Syrian crisis. Turkey is not Georgia or Ukraine; NATO will have to act to counterbalance Moscow if the tension in the field gets out of control. For the last decade, Moscow exploited NATO’s indifference to the regional crisis, but the Libyan and Syrian crises may be a turning point if Moscow underestimates the responses of NATO.

Maintaining constructive relations with Moscow and expanding cooperation in the energy and trade sectors is important for Turkey. However, nothing is more important for Turkey than its long-term national security concerns. For the last couple of weeks, Moscow demonstrated how it can play dirty in the field despite the constructive diplomacy at the leadership level. From now on this new situation will be the new baseline in Ankara’s relations with Moscow.