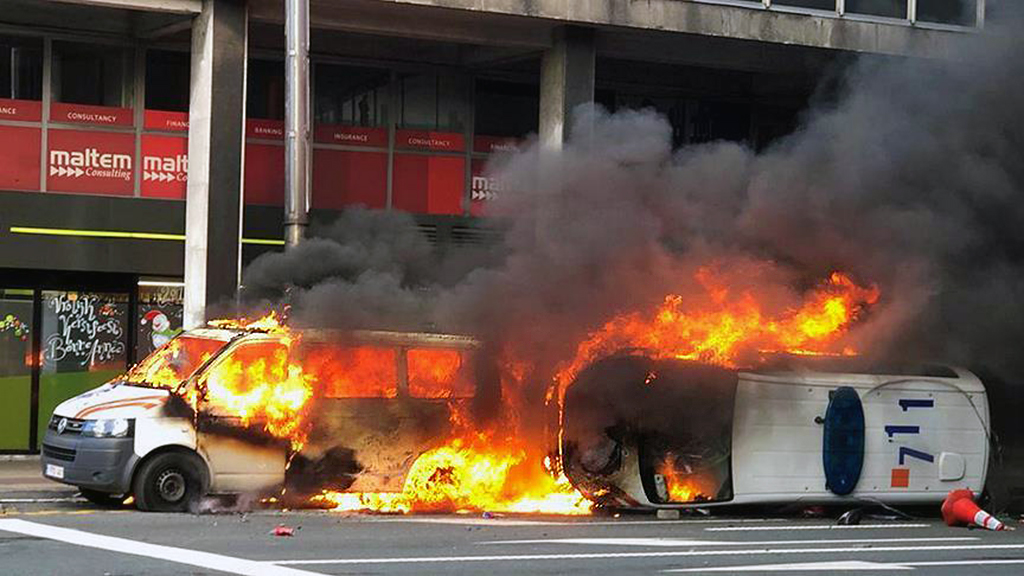 The spreading disorder in Europe has recently haunted France, putting the country's democracy to a huge test and alarming after EU states as well

The French capital Paris has been besieged by demonstrations since Nov. 17. Hundreds of French citizens have donned yellow vests as they protest the rise in fuel prices and economic hardship. Together, they rushed to the streets and public squares to stop French President Emmanuel Macron from implementing his core policies. Although the overwhelming majority of protesters remain nonviolent, some have been seen torching automobiles and clashing with police. Others have themselves become victims of police brutality. Their distinctive yellow vests, which drivers are required to wear in case of a traffic accident, have become the symbols of an existential crisis in French democracy.

Experts have already drawn parallels between the most recent demonstrations and the 1968 uprising. As a matter of fact, some commentators were quick to coin the phrase “European Spring” as violence spread to neighboring Belgium and the Netherlands. It remains to be seen whether the French riots will have such a remarkable impact on the continent. One thing, however, is clear: The yellow vests are reacting against French elitism and Macron’s condescending brand of politics. Members of the French middle class, who cannot find employment and are instead forced to dip into their savings, are indeed furious.

Macron emerged as a politician with the potential to revive the political mainstream in Europe, where the wind of populism has been blowing hard. Despite lacking deep roots in party politics, he was able to brand himself as a popular representative of the so-called liberal balance. Once in power, Macron adopted a pro-European Union, pro-globalization and pro-liberal economic agenda. Together with German Chancellor Angela Merkel, the French president hopes to show the kind of political leadership necessary to keep the European Union intact.

Yet, Macron, whose aggressive style worked to his advantage in the international arena, faces an uphill battle at home. Saudi Crown Prince Mohammed bin Salman, who had a difficult time after the murder of journalist Jamal Khashoggi, isn’t the only person refusing to listen to him. French citizens do not believe their president, who has been unable to meet their expectations. With his approval rating standing at 26 percent, Macron’s economic reform and austerity policies have encountered fierce resistance from the French public. In addition to the institutional resistance of labor unions, the French president finds himself having to tackle a leaderless, nonhierarchical crowd. Although Macron’s government attempted to discredit the protesters as far-right thugs who yearned for chaos rather than change and French media focuses on the damage caused by the riots at the expense of police brutality, French people remain supportive of the yellow vests.

That support reflects a serious crisis that requires all European democracies to take stock. Eastern Europe has long been under the influence of authoritarianism. Now, the continental political mainstream has followed suit. We cannot afford to insulate the French crisis from Britain’s failure to manage its departure from the European Union, the Italian government’s problems with Brussels and the very real possibility that the far-right Alternative for Germany (AfD) will be part of Germany’s next government. In other words, Europe’s leading institutionalized democracies face uncertain futures.

To make matters worse, the world is going through a period characterized by turbulence rather than order. The idea that the liberal world order, whose victory was quickly declared after the Cold War, will collapse is becoming increasingly popular. The main reason behind that view’s popularity is the way the United States opted to redefine its global role. Washington has been using its global hegemony to curb the economic development of other nations. Currently, the Donald Trump administration is resorting to trade wars and economic sanctions to discipline U.S. allies. Although the G20 summit in Buenos Aires, Argentina temporarily stopped the ongoing trade war between Washington and Beijing, the future looks bleak. The European Union, too, is concerned about Washington’s eagerness to further its economic interests through coercion.

A relative decrease in economic welfare could fuel a deep crisis in the West, despite its wealth. The Trump administration did not go to great lengths to conceal Washington’s crude national interest behind Western civilization’s rhetoric of values.

As for Turkey, I believe that our country tends to experience global turmoil in advance. Over the past five years, Turkey has encountered challenges that tested its democracy. In one way or another, Turks proved capable of taking care of their own business. Now it is time for the rest of Europe to face the music. They must brace themselves for a new wave of protests that manifest themselves in new symbols and colors.

Moscow or Washington: Which is now closer to Ankara?
Next
Loading...
Loading...
We use cookies to ensure that we give you the best experience on our website. If you continue to use this site we will assume that you are happy with it.Ok