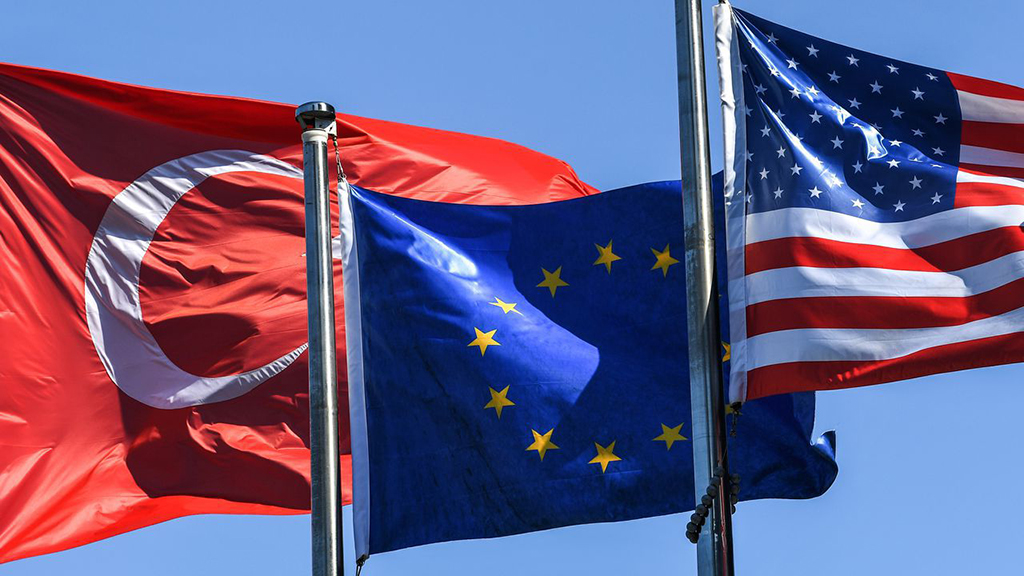 (From L) The Turkish flag, the European Union flag and the U.S. flag float in the wind in the financial and business district of Maslak, Istanbul, Aug. 15.

The Trump administration's controversial and reckless moves against Ankara are about to spell the end of the traditional Turkey-U.S. partnership

In the last two weeks the crisis between Turkey and the U.S. has been one of the most debated issue on international platforms. The attitude of the U.S. administration toward Turkey and the sanctions imposed on Turkish officials have been regarded as critical steps for the future of the alliance. However so far, the U.S. has preferred not to change this attitude. In his latest statements on Turkey, U.S. President Donald Trump continued threatening Turkey and calling it a “problem.”

Other than some who wanted a fallout in relations for the last few years, for many the deterioration of Turkish-U.S. relations may cause long-term problems in the geopolitics of the Middle East. In the last year, the Trump administration’s policies have already caused anxiety for policymakers in the region due to its inconsistency and fluctuations. The Syria strategy that disappeared in a few months, the Iran strategy that is considered little more than a wish list by experts and the rumors of a Middle East peace plan that is not expected to bring any peace anywhere, formed the pillars of the Middle East strategy of the U.S. administration.

In the meantime, the lack of coherence by the administration in areas of critical issues, including the Qatar crisis, reflects the lack of harmony within the administration. Moreover these incoherent inconsistencies are taking place at a very critical time in Middle Eastern geopolitics. The future of Syria, the next step in the war on terror, the potential threats of an escalation between Iran and Saudi Arabia, the risks of an unresolved Gulf crisis between Qatar and other countries, the destabilizing civil wars and the humanitarian costs of them all are waiting to be resolved.

In the midst of all of these crises, the U.S. administration is pushing toward the deepening of the crisis with Turkey, the country that will be critical not only in the potential resolution of the Qatar crisis and in the war on terror, but also in the future stabilization and reconstruction efforts of Syria and Iraq. A country a few months ago that top level officials indicated was in a critical position to deal with geopolitical challenges in the region. So far, the decline in Turkish-U.S. relations were regarded by some as temporary setbacks in relations due to the lack of strategy by the U.S. on Syria. Optimists in bilateral relations were indicating continued cooperation on different issues as possible safety valves for bilateral relations. However, recent developments demonstrated a totally different story. For Turkey, the tweets and threats show total disregard by the U.S. administration in the partnership between them. What’s more significant is that after such steps by the U.S., the compartmentalization of relations has become extremely difficult. If the crisis is not contained in a short period of time, the partnership will enter a new phase that will be extremely hard to reverse.

This new phase of relations will make cooperation between the two countries on other issues in the Middle East more difficult. So far it is hard to understand the cause of the U.S. attitude. Some in the U.S. press have started to express the long suspected motivation of the U.S. administration – the approaching U.S. midterm election. If this is the true cause of the administration’s attitude, it demonstrates a significant problem in its approach toward alliances. Alliances are hard to attain in this international system, they are equally hard to lose due to institutional infrastructure and interaction, however once they are damaged due to problems in mutual trust and confidence they can become hard to fix or heal. In one of the most destabilized regions of the world, the most significant alliance right now is under threat of being damaged and the costs of this damage can bring significant geopolitical problems.

The Trump effect and Turkey's rapprochement with Europe
Previous

What Western alliance?
Next
Loading...
Loading...
We use cookies to ensure that we give you the best experience on our website. If you continue to use this site we will assume that you are happy with it.Ok