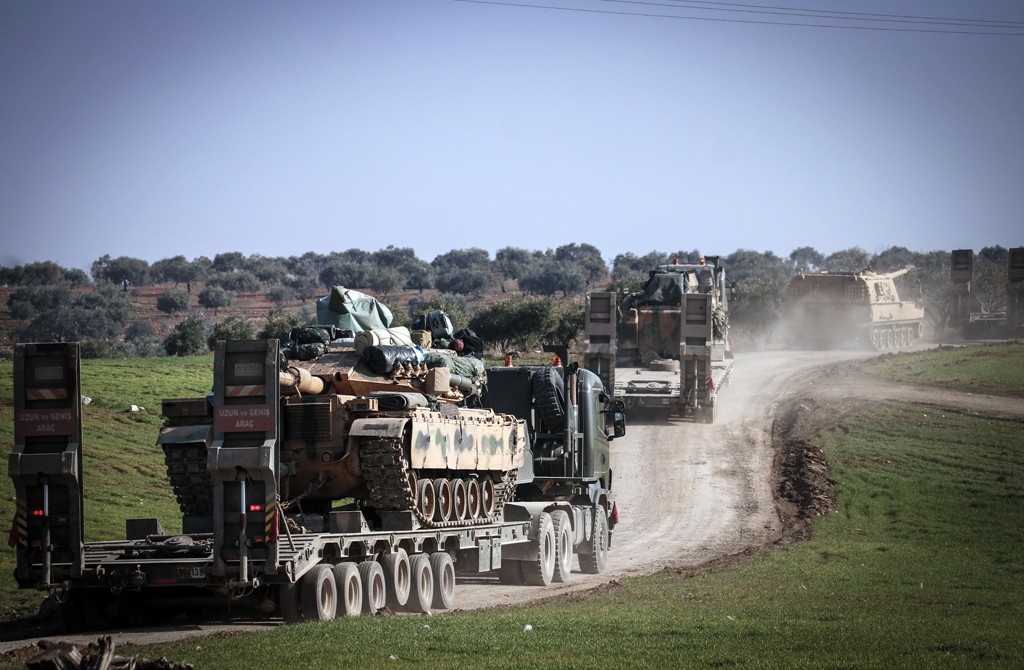 Total of 150 military vehicles of Turkish Armed Forces' pass through Reyhanli district of Turkey's Hatay as they are being deployed to Syria border as reinforcements, including howitzers, tanks, ammunition, armored construction machines and other military vehicles on February 17, 2020.

Three fronts for the Idlib problem

Turkey is fighting on three fronts to manage the Idlib crisis: a military operation, diplomacy and international public opinion.

Turkey is fighting on three fronts to manage the Idlib crisis: a military operation, diplomacy and international public opinion. The military operation became a top priority since the regime killed 13 Turkish soldiers. In addition to reinforcing its observation posts in Idlib, Ankara dispatched military units to hold territory on the ground. President Recep Tayyip Erdoğan had urged the regime forces to retreat by the end of February. In last week’s address to the Justice and Development Party’s (AK Party) parliamentary caucus, he doubled down saying: “I hereby declare that we will strike regime forces everywhere, without limiting ourselves to Idlib and the Sochi agreement, if our soldiers at observation posts or elsewhere suffer the slightest damage.” Judging by Erdoğan’s statement, Turkey will limit the scope of its military operation to Idlib but retaliate against regime attacks across Syria. Whether Turkey will strike Qamishli, Aleppo or Damascus will depend on Ankara’s choice and technical capabilities. Indeed, there has been no serious warning such as this from Turkey to Bashar Assad since the civil war began.

The second dimension of Turkey’s crisis management strategy is diplomacy – specifically, diplomatic talks with Russia. Erdoğan personally conveyed his country’s commitment to defending Idlib to Russian President Vladimir Putin. The two leaders agreed to give another chance to inter-delegation negotiations. Military leaders will meet in Ankara, and cabinet ministers in Moscow one more time to exchange views on “options on the ground.” The Russians rely on their time-tested tactic of advancing step by step in the theater and at the negotiating table. Yet Ankara refuses to share the territory, demanding a return to the line of demarcation under the Sochi agreement. Erdoğan and Putin will reach the final decision personally. Finding a middle ground serves the interests of both sides. After all, the disagreement between Turkey and Russia over Idlib could have long-term ramifications. Let us see whether Putin will find a way to keep a lid on tensions or enable third parties to influence the Turkey-Russia relationship.

The ball is in Moscow’s court. Turkey senses a very serious threat in Idlib and believes the fate of other safe zones in northern Syria is at stake here. Let us recall that the top threat emanating from Syria has been terrorism – specifically, PKK/YPG and Daesh. At the same time, there is the problem of refugees. Turkey has conducted three cross-border operations to combat terrorism. The first incursion, Operation Euphrates Shield, primarily targeted Daesh and therefore enjoyed American, Russian, and global support. The remaining operations, Olive Branch and Peace Spring, took place amid U.S. objections and with Russian consent. The third incursion, in particular, occurred because Turkey forced the U.S. to withdraw from northern Syria. Washington assumed that its retreat would spark tensions between Turkey and Russia, but Erdoğan and Putin relied on leader-to-leader diplomacy to handle the situation.

Turkey’s fourth military operation will take place in Idlib. This time around, Ankara will put boots on the ground to save the Sochi agreement. Turkey is calling for the implementation of the deal, which Russia and Iran signed, and Germany, France and the United Kingdom endorsed. Turkey’s mission is to stop the bloodshed and prevent the next refugee crisis.

The third and final dimension of Turkey’s strategy is to lobby global heavyweights and international public opinion. Defense Minister Hulusi Akar called on NATO, Europe, and the rest of the world to provide “serious and concrete support” to end the crisis in Idlib. The United States, the European Union and NATO issued statements reiterating their commitment to Turkey’s right to self-defense. There is no reason to expect Europe to come up with a game changer. At most, Germany would provide some financial assistance for Syrian refugees. By contrast, there are many things that the U.S. could offer if it wanted to – from public support to arming the rebels, targeting key regime bases and offering new ways to defend Turkey. Washington will obviously wait to see Putin’s move. At the same time, pressure from America, Europe and international public opinion would encourage Russia to settle.

Some people in Washington seem to think that the crisis in Idlib provides a great opportunity to teach Turkey a lesson about the downside of doing business with Russia. Let us recall that Washington’s misguided policy, dating back to the Barack Obama administration, allowed Russia to strengthen its influence over the Middle East and North Africa. It was the same policy that encouraged Turkey to work more closely with Moscow. If Washington steps up to the plate now, it will strengthen its influence on the Syria file. Failure to take action, in turn, will result in the loss of yet another opportunity to repair the Turkey-U.S. relationship.