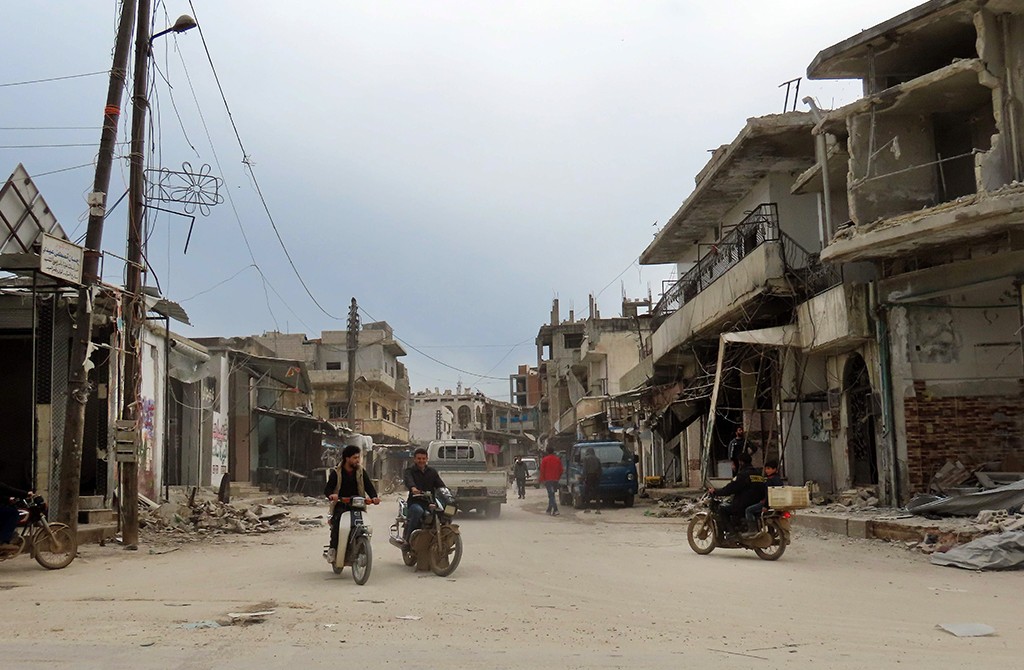 Syrian men ride their motorcycles through a damaged neighborhood in the town of Binnish, in Syria’s northwestern Idlib province near the Turkish border, following a Russia-Turkey cease-fire deal, March 6, 2020. (AFP Photo)

The Moscow agreement is fragile at best

After a six-hour meeting between leaders and technical committees, President Recep Tayyip Erdoğan and his Russian counterpart announced a cease-fire for Syria's Idlib. During the meeting at the Kremlin, the presidents gave short speeches. The whole world followed the process as the decisions could trigger an escalation in violence while intensifying the humanitarian crisis unfolding in Syria. Turkey and Russia both wanted to end the civil war but were unwilling to concede their positions. For both Turkey and Russia, bilateral relations were at stake as well.

After a six-hour meeting between leaders and technical committees, President Recep Tayyip Erdoğan and his Russian counterpart announced a cease-fire for Syria’s Idlib. During the meeting at the Kremlin, the presidents gave short speeches. The whole world followed the process as the decisions could trigger an escalation in violence while intensifying the humanitarian crisis unfolding in Syria. Turkey and Russia both wanted to end the civil war but were unwilling to concede their positions. For both Turkey and Russia, bilateral relations were at stake as well.

The two leaders indicated their differences during the press conference. While Russian President Vladimir Putin emphasized the attacks against Russian bases and his concern about the fight against terrorist groups, Erdoğan stressed the protection of civilians against the regime attacks and mentioned the violation of the Sochi Deal by the regime. Erdoğan reiterated Turkey’s quest for a fair political solution to the Syrian civil war. Both sides were careful not to accuse each other directly.

The parties did not reach a shared understanding of the fundamental issues related to the Syria conflict. However, they agreed to halt the warfare and allow the formation of a new status quo. Preventing further escalation of the crisis was important for both sides because Turkey could not get significant support from its NATO allies, more specifically from the U.S.

While American authorities declared their diplomatic support for Ankara, they refrained from providing the high-altitude air defense system. Pentagon was not in favor of a no-fly zone on Idlib. European leaders also indicated their support for Idlib, but their support was weak and unsatisfactory. They were more concerned about the possibility of another refugee crisis than a humanitarian catastrophe in northeastern Syria or about the Bashar Assad regime’s attacks against their NATO ally Turkey. More substantial support from Washington and European capitals could have strengthened Ankara’s negotiation position in Moscow. Both American and European actors seemed more interested in a deeper rift between Turkey and Russia. Therefore, they were in favor of the continuation of controlled tension between Ankara and Moscow as opposed to a unanimous agreement.

For Moscow, the rising cost of the Syria war is a significant concern. They wanted to end the Syria civil war as soon as possible and to move forward, consolidating their interests in the Eastern Mediterranean. Continuation of the conflict in Syria distracted Moscow from other significant strategic issues. The regime side lost a considerable amount of critical equipment in the active drone attacks by the Turkish military. The decline in the oil prices due to the impact of the global spread of the novel coronavirus, COVID 19, also put some extra pressure on Moscow, whose oil and gas revenues signaled a drastic decline. Freezing the conflict and reaching a cease-fire worked in favor of both parties, but neither of the parties was satisfied with the outcome.

Risks to the Moscow deal

There are potential spoilers for the Moscow agreement, including Assad’s Iranian backed militias, the Hayat Tahrir al-Sham (HTS), the YPG/PKK and other radical groups. Actors bound to benefit from increasing tension between Turkey and Russia may motivate the spoilers to act in the near future. Erdoğan mentioned the impact of the “black cat” that tried to ruin Turkish-Russian relations, to the Turkish journalists on his flight back from Moscow. The United Arab Emirates and Israel are probably the “black cats” in this scenario, and they will continue to wreck Turkish-Russian relations.

For the Turkish side, the situation in Idlib was part of Turkey’s fundamental national security interests. The only way to prevent another wave of refugees is to freeze the warfare in and around Idlib. Turkey also wanted to be a part of the political process toward the final solution of the nine-year Syrian war. If Idlib falls into regime control, Turkey could have lost its influence on the political negotiations in ending the civil war in Syria. The Russian side continued to insist on a military solution to the war despite the Astana and Sochi processes. The agreements and a political solution to the Syrian civil war were at stake at the meeting.

In terms of preventing a rupture in their bilateral relations, the Moscow summit can be considered as a successful effort. But the meeting failed in reaching a shared agreement and a road map to the resolution of the Syrian crisis. The parties just decided to freeze the crisis and postpone the solution to another round. In the meantime, the parties will try to rebuild their trust so that the new situation can move in a more positive direction. If parties continue to threaten each other’s interests in other areas such as Libya or Crimea and Ukraine, then the relations may lead to another round of escalation.

In the meantime, those who are unhappy about the new status quo in Syria will continue their efforts to ruin the deal. The Turkish side, therefore, should not end Operation Spring Shield. It should pause the operation and, in the meantime, fortify its military presence in the frontlines of the Idlib. The immediate step should be to strengthen its air defense system, especially in Idlib’s city center. Any violation of the deal should be responded to but with the caution about the presence of spoilers. Until a better process is stimulated, it is necessary to maintain the status quo by any means possible.

Europe's reaction to the new refugee influx
Next
Loading...
Loading...
We use cookies to ensure that we give you the best experience on our website. If you continue to use this site we will assume that you are happy with it.Ok