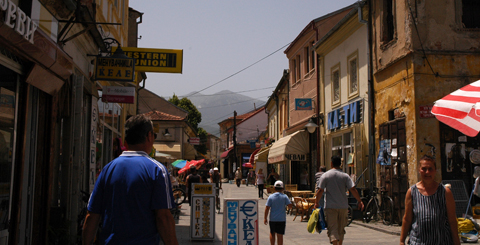 The Europeanization of the Western Balkans

Any regional conflict in the Balkans, would not only allow the countries to drift into turmoil, but would also threaten the security of Europe.

The Europeanization of the Western Balkans: Is It Just A Dream?

After the wars of Yugoslav secession between 1991-1995 and the Kosovo conflict in 1999, the European Union became more anxious to enlarge its borders into the Western Balkans. In fact this enlargement strategy of EU was an apparent departure from its previous passive presence in the region where the EU had restricted itself to providing humanitarian assistance. Thus, in contrast to pre-1999 Western Balkan policies, the 2000s have witnessed a period of effective “transformation through integration”. The policy brief discusses the reasons behind EU engagement in the Western Balkans, steps that were taken through the EU enlargement, stages that each Western Balkan country stands at the EU membership process and reasons of the growing Western Balkan skepticism in Europe in the last years. It also deals with the question of how Western Balkans could successfully accomplish the accession process and be an integrated part of Europe. The potential contributions of Turkey to the Balkan regional cooperation are discussed as well. ***

During the dissolution of Yugoslavia and the subsequent war of 1992-1995, the Western Balkans became Europe’s Achilles’ heel, revealing EU inability to act decisively in crisis management. The EU neither played a critical role in the ethnic bloody conflicts of the former Yugoslavia nor was it successful in mobilizing the international community before the Kosovo crisis upsurge. It was, however, the crises in the Western Balkans during the 1990s that proved to be a catalyst for much change within the EU. After those crises were brought to an end, there was a widespread perception, even among EU policy makers, that Europe could do better. As Chris Patten, the EU commissioner for external relations put it: Europe completely failed to get its act together in the 1990s on the policy for the Balkans. As Yugoslavia broke into bits, Europe was largely impotent because it was not united. Some member states wanted to keep Yugoslavia at all costs, some wanted to manage its break up, and others still felt we should stay out of the whole mess… We had to do better. A lot better. Also, due to previous experiences with Central and Eastern Europe, the EU became well aware that conditional offer of membership has an enormous influence in terms of suppressing nationalist governments and in introducing discipline in economic and political spheres. As Moore says, it is mainly for this reason that the EU has engaged in a strategy for “effective deterrence,” in which external incentives dissuade negative policy patterns and reward prescribed ones. Naturally, this policy targets the individual compliance of every state as opposed to pre-1999 EU policies for regional cooperation. Thus, the integration policy of the EU reveals much about what drives change not only in terms of the Balkans but also in the EU itself. Any regional conflict in the Balkans, known as the “backyard of Europe,” would not only allow the countries to drift into turmoil, but would also threaten the security of Europe. Thus the geographic closeness of the region made the EU more decisive in maintaining peace and stability there in order to prevent the possibility of migration influx and new economic burdens. This became more important especially after the last two enlargements of 2004 and 2007 when the EU frontiers were extended throughout the East, and with the new Union of 27, moved closer to the

The New Middle East: One Year After the First Flotilla
Next
Loading...
Loading...
We use cookies to ensure that we give you the best experience on our website. If you continue to use this site we will assume that you are happy with it.Ok