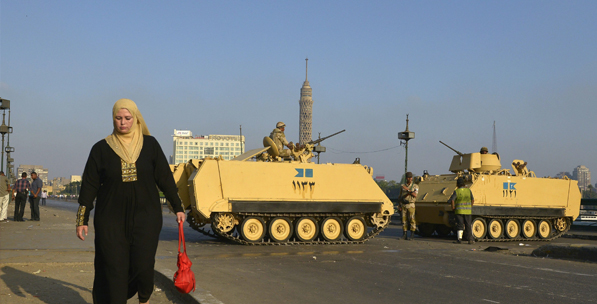 From the Tutelary Regime to the Coup, Egypt

The Arab Uprisings forcing the dictators to step down in the First Wave are to target the transformation of the old order and the establishment in the Second Wave.

A new period has begun in Egypt when the tutelage regime that had continued since February 11, 2011 was converted into a military regime by the army commander Gen. Abdel Fettah al Sisi on July 3, 2013. The most critical point that needs to be kept in mind with regards to Egypt is that the only addressee of the July 3 coup was the first elected president of Egypt because the takeover simply targeted President Mohammed al Morsi not other political or corporate actors. As far as the State of Egypt is concerned, a transition from the tutelary regime to the coup order has been achieved. Liberals – other than Morsi and the Muslim Brotherhood (Ikhwan) -, laics, Christians, Salafis and proponents of the old regime directly became the supporters of the coup not only the interlocutors. This was the scenery in the country, but it has evolved into a quite serious state. The US administration even avoided uttering the “c” word and conducted an in-depth study including the financing of the street movements that cleared the way for the coup; the European Union (EU) spokesmen did not even accept that it was a coup, and the Gulf countries sent congratulatory messages to the new government almost before the coup…

The only reality we are reminded of by these scenes is that the July 3 military coup in Egypt is a terrible political pornography, at least as much as Iraq’s occupation process. The Egyptian military takeover could have been executed in many different ways; however, it would not have been realized this easily if it were not for the group of tin soldiers who undertook the responsibility passionately. This group consisted of nobody else but liberals and laics of course. Their political sassiness from the very beginning – even during the takeover process – has transformed into temper in the parliamentary elections, then into provocateur politics, and a clear-cut politics of hatred following the presidential elections. Anti-Morsi liberals and laics cooperated with the Western power centers and elites, as the pro-Mubarak liberals together with the actors from the Gulf slogged on Morsi’s overthrow. The Egyptian establishment every step of the way assisted the liberals with all of its official and unofficial apparatus during the coup process shaped by the external forces. Either electricity was cut in capital Cairo or there were gas shortages. One day a Shiite, the other day a Christian was lynched. Both wings of the Parliament were abolished. Morsi had to work with the security forces of the Mubarak regime. So, they confined him to govern the country through decrees and did not hesitate to name Morsi “the single man or an authoritarian or even a dictator” while he was trying to get some things done through decrees. In short, Morsi with no police, no army and no intelligence backing him up was ousted by the military with international support.

It is almost impossible for the Egyptian army to have politically conducted the coup process. Just for this reason, the coup photo taken on the day of the takeover, July 3, quickly became meaningless. Potential names for the prime ministry have been changed three times since the day of the coup. A prime minister was finally found in the fourth try. Similarly, Abdel Majid Mahmoud, who was one of the key figures of the Judiciary tutelage during the entire coup process, had to resign. Salafis – the Nour Party in particular in the dissolution process with the departure of its leader to form the Vatan Party (Homeland Party) – are in a mare’s nest for providing support to the military takeover. The coup administration does not even bother to form a technocrat government by simply assigning names who have played politically active roles during the process to the Presidency and ministries.

The Egyptian army is not the kind that undertakes an ideological founding task. The military, including its elites, share the similar social-economic world with people in the street – especially with the Egyptians who are neither liberal nor