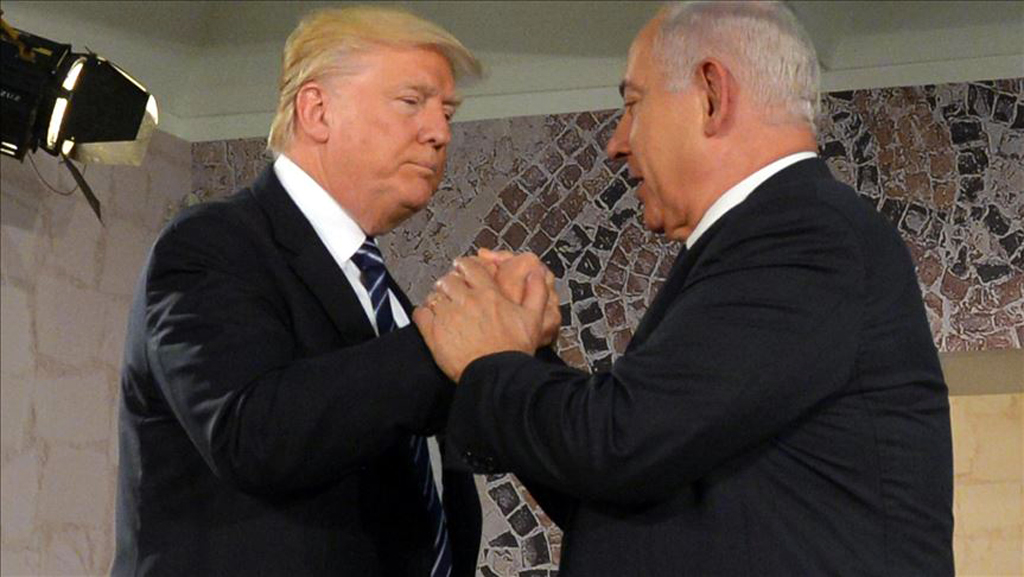 The 'Deal of the Century' announced by U.S. President Donald Trump on Jan. 29 has been handled by the global media in a way that can be considered novel. That discourse, the like of which we have seldom ever encountered, was reflected both in written content and in photos. Images provided by global news agencies like Reuters and AP revealed content that can be viewed as "critical of Israel." Various mainstream media organizations ranging from The Guardian, Washington Post and BBC to The New York Times have published pieces and opinions criticizing the "Deal of the Century."

The “Deal of the Century” announced by U.S. President Donald Trump on Jan. 29 has been handled by the global media in a way that can be considered novel. That discourse, the like of which we have seldom ever encountered, was reflected both in written content and in photos. Images provided by global news agencies like Reuters and AP revealed content that can be viewed as “critical of Israel.” Various mainstream media organizations ranging from The Guardian, Washington Post and BBC to The New York Times have published pieces and opinions criticizing the “Deal of the Century.”

We should stress that this is an interesting phenomenon at first glance, because the general policies of these media organizations in the recent past and their coverage of the Israeli-Palestinian conflict were largely compatible with Israel’s interests. It’s hard to find criticism from global media when Israel mindlessly massacres hundreds of civilians by bombing Gaza and kills Palestinian women and children on streets. Hence, the question of whether the “anti-Israel” content that stood out in news articles and images following Trump’s joint press declaration with Israeli Prime Minister Benjamin Netanyahu standing by him is realistic or not remains an important question mark. Only time can show what it will evolve into.

But the “Deal of the Century” as announced by Trump means a new stage that supports Israel’s expansionist policies. It is the newest phase in a process that has been going on since Israel’s declaration of independence on Palestinian territories on May 14, 1948. With this new phase, Israel will probably launch a new move to seize the last remaining lands that are still under Palestinian control. The “changes in territorial control” between the two sides since 1948 show that it has been persistently and relentlessly in favor of Israel.

At this point, Palestinians are trapped in tiny and scattered enclaves and have no freedom. They face the violations of Israel’s ultra-authoritarian and repressive government. Their lands are divided by a wall of shame, and they are forced to live in an open-air prison isolated from the rest of the world. Yet they refuse to give in. It should be added that the international community just watches while all of this happens, remaining mostly silent or only uttering condemning words occasionally.

Despite this global silence, Palestinians have done all that they could to protect the holy sites of Muslims and Christians, particularly Jerusalem and Al-Aqsa Mosque, from destruction by the Zionists. And they keep on doing it as well.

On the other hand, Israel’s policy of occupation and annexation in the region has been on the rise after Trump was elected president of the U.S. As per its content, the “Deal of the Century” strongly suggests the continuation of the annexation policy. It can be regarded as a plan to annex the whole of Palestine. Many places currently populated by Palestinians, particularly East Jerusalem, will be left to Israel. The only country that speaks out against that picture is Turkey. Stating that the Al-Aqsa Mosque is a red line for all Muslims, President Recep Tayyip Erdoğan emphatically voiced Turkey’s opposition to Trump’s proposal.

Arab countries whose populations are almost exclusively Muslim fail to take a stand not only on this issue but also on Israel’s expansionist policies that have been going on for a long time now. These countries are almost wholly committed to Israel’s interests at the moment. Though the resolution adopted by the Arab League rejects the deal, it is well known that Saudi Arabia, United Arab Emirates, Egypt, Bahrain and Oman support the plan.

The critical content highlighted in a few news pieces and photos in global media following Trump’s announcement was noteworthy. Because when Israel is in question, criticism seldom emerges and when it does, media bosses immediately bring to book those responsible for it. So, the kind of content that appeared in the media following Jan. 29 needs to be analyzed.

For instance, the title of a piece posted on BBC News on Jan. 29 describes the deal as a “huge gamble” and a “big win for Israel.” (Trump’s Middle East peace plan: ‘Deal of the century’ is huge gamble) It says that the atmosphere in the East Room at the White House was more a party than a news conference.

An article published on the Washington Post’s website notes that the plan made Israel happy while infuriating Palestinians. It is remarked in the piece that Trump has tilted the decades-old U.S. policy on Palestine heavily in Israel’s favor. It states that this policy delights Trump’s evangelical and pro-Israel supporters.

An article by Diana Buttu on The Guardian’s website published on Feb. 2 notes that the “Deal of the Century” is against international law. Its title – “What we Palestinians think does not matter – all that matters is Israel” – suggests that the world does not care about Palestinians while Israel is favored in all cases, denoting a critical approach to the deal.

The title chosen for an article on The New York Times’ website – “Capital in Trump Mideast Plan Makes ‘a Joke’ of Palestinian Aspirations” – co-authored by Isabel Kershner and David M. Halbfinger, points to how the pro-Israel plan frustrated the expectations of the Palestinians. By referring to the territory offered to the Palestinians in the plan as the location of their capital in place of East Jerusalem with the words, “These areas are not a symbol for anybody,” the article criticizes this essentially pro-Israel deal.

It is possible to cite other quotes as well. But it would be helpful to put two photos under the microscope here. Those who follow global news agencies know that the “point of view” in photos distributed in relation to Israel is given meticulous attention. It’s because the point of view – i.e. the position from which the camera sees the scene – determines what is seen, how it is seen and how it should be seen. The point where the photographer stands also shapes the frame. For example, when covering Israeli soldiers’ intervention to the Palestinians, mostly the images of Palestinians resisting or throwing stones are shown. It’s nearly impossible to see the Israeli soldiers shooting.

Instead of Israel’s bombing of Gaza, photos feature rockets fired from Gaza (toward Israel). Global news agencies distribute photos of Israeli women and children scared by the noise, instead of the photos of the civilians killed and the houses destroyed in the Gaza Strip. The impact of the sirens on Israelis’ psychology is covered extensively. Thus, the discourse is founded upon a negative image of Palestinians.

Actually, this is well-known among those monitoring the media. Some of the criticism about international news media stems from this biased approach. But two photos distributed by both the Agence France-Presse (AFP) and Reuters following Trump’s announcement of the plan are exceptional in this sense. In both of them, gun-wielding Israeli soldiers are in the center. Israeli soldiers in these photos are in an attack posture, portrayed negatively. They are the agents of violence. In front of them are a woman and a child trying to flee. AFP and Reuters’ choice of these utterly realistic photos is definitely important. How this approach will evolve in the coming period is yet to be seen.

However, since the fight between Trump and a large part of global media organizations is known, this approach by the media also creates the impression that it results from this duel but not from a concern for fairness. So, we should follow how the global media approaches the Israeli-Palestinian conflict without entertaining any prejudice. For there are numerous signs that the region will witness a lot of incidents in the upcoming period that the media should cover fairly. One of the catalysts for probable incidents is Trump’s ill-designed plan.

Fair news coverage by global media about Palestinians’ rights recognized by international organizations as well is consistent with journalistic principles. However, if the truth is ignored as in previous examples by returning to pro-Israeli news coverage, news and photos posted in relation to the “Deal of the Century” will lose much of their relevance. What emerges would be an unpleasant impression that these contents resulted merely from the fight with Trump. That’s why the global media should continue to post news and photos that portray Palestine in a positive way and Israel in a negative way. Since they reveal the truth on the ground, such content will also be consistent with universal principles of journalism.

US-Iran Conflict in Iraq
Next
Loading...
Loading...
We use cookies to ensure that we give you the best experience on our website. If you continue to use this site we will assume that you are happy with it.Ok