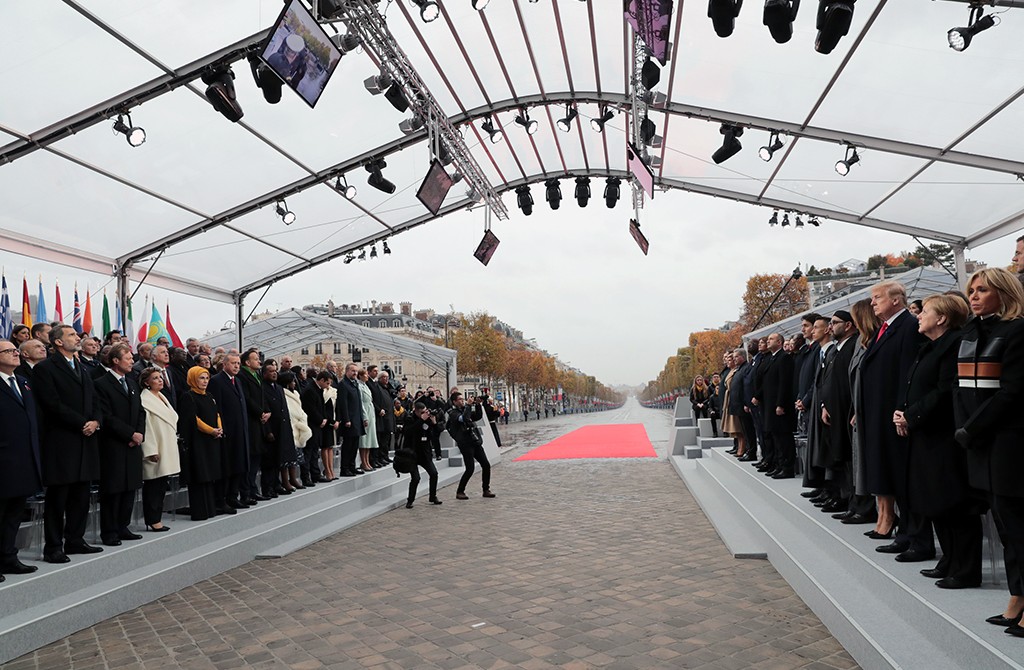 World War I never ended in the Middle East

The traces of the World War I can still be observed in the Middle East, which is caught between global powers pursuing their interests and local actors struggling with conflicts and civil wars

Seventy world leaders gathered in Paris last Sunday to mark the 100th anniversary of the end of World War I (1914-1918). Though the war may have ended on the Western Front, its aftermath continues to affect the Middle East, the most penetrated region in the world.

As American historian Sean McMeekin puts it, World War I “never really ended” on the Eastern Front. This stands true, especially for the Middle East. For instance, some parts of the former Ottoman Empire, such as Iraq, Syria, Palestine and Yemen, were war zones after WWI and unfortunately continue to be so even today. In other words, the region still suffers from the results of the war.

Considering the main developments over the last century and also today’s developments in the Middle East, there have been several enduring implications of the war for the region. First of all, the war disintegrated three empires – the Russian, Ottoman and the Austria-Hungarian – in favor of national self-determination. However, the most deeply influenced region was and still is the Middle East.

One of the main causes of the disintegration of the empires was nationalism and this nationalist ideology proved to be divisive for the East.

The creation of new and artificial states by the colonialist powers are now the main sources of most of the region’s conflicts. The regional map was drawn according to the national interests of the colonialist powers rather than the realities on the ground. Eventually, almost all the newly established states in the region were left weak and vulnerable to external interference.

For instance, the regional Kurdish question is one of the results of World War I. The Kurdish population living under the Ottoman State was divided into three different parts – namely Turkish, Iraqi and Syrian. But even in present-day Iraq, Turkey and Syria, the Kurds have remained a regional issue. They have been manipulated and instrumentalized by global powers against their host countries.

The second implication of the war for the region was the Balfour Declaration, where the British promised the Zionists a nation-state in Palestinian lands. Thus, the war led to the creation of the longest and the most devastating crisis in modern history – the Palestinian-Israeli problem.

Many observers rightly claim the Palestinian-Israeli crisis as the mother of all other regional problems in the Middle East. With the collapse of the Ottoman state, the political and social atmosphere for peaceful coexistence in Palestinian lands came to an end. Among others, the crisis led to several Arab-Israeli wars and the creation of the Organisation of Islamic Cooperation (OIC). Today, the resolution of this problem is one of the top priorities of the global powers.

Third, the artificial states and dependent regimes in the region prevented not just political stability but economic development as well. As if that were not bad enough, the main economic resources of these states are exploited by the global powers. For instance, Western countries have extracted the region’s natural resources, such as oil and natural gas, and sold them on international markets. Nationalization of the oil resources ended up in regime changes – as in Iran in 1953.

Global powers still maintain their control in the region in order to secure the safety of the oil market. One direct result of this dependence on external powers is poverty among the general population in the region. Since global powers and their regional collaborators share most of the resources and wealth, little remains for the average citizen. Here, it is necessary to keep in mind that the failure of these states in providing food and shelter for their citizens was one of the main reasons behind the Arab insurgencies in 2011.

Likewise, many of the Middle East’s problems can be traced back to World War I. Today, neither the architects of the current regional system nor those who oppose it are happy with the regional status quo. That is, the region is in a stalemate and a state of chaos. The Middle East is now caught somewhere in between the groups with interests favoring either the maintenance of or challenge to the regional status quo, and this condition is not sustainable. Unlike in the previous decades, there are two conflicting revisionist and irredentist approaches – one represented by Iran and the other by Saudi Arabia – that are pushing the region toward further instability and turmoil.

A warning from Erdoğan and a war of words in Paris
Next
Loading...
Loading...
We use cookies to ensure that we give you the best experience on our website. If you continue to use this site we will assume that you are happy with it.Ok