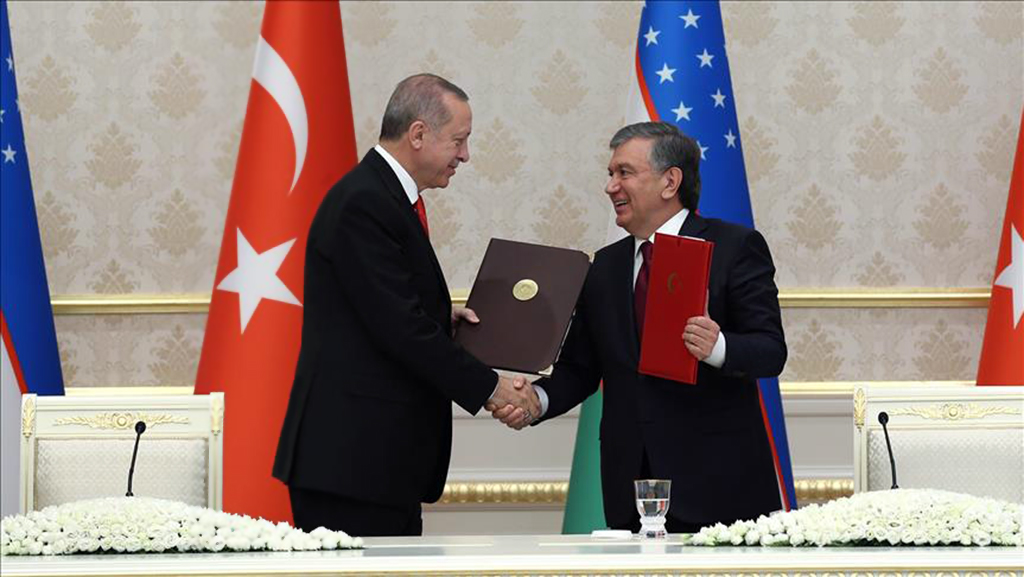 Turkey and Uzbekistan have had tense relations for decades.

Furthermore, a large group of media representatives and businessmen also accompanied Erdoğan. During the visit, the two leaders discussed bilateral and multilateral political, military, economic and cultural relations and exchanged views about regional and global issues.The two countries signed 25 agreements on different subjects. Here are some of the steps taken by these agreements. The two states agreed about visa-free travel for Turkish citizens to Uzbekistan which will boost Uzbek tourism. In addition to its Istanbul-Tashkent and Istanbul-Semerkand routes, Turkish Airlines will start new flights from Istanbul to Bukhara, Qarshi and Urgench.

Furthermore, new flights from Tashkent to Ankara, Izmir and Antalya will begin soon. Uzbekistan wants to build a new road to reach the Marmaray railway line in Istanbul via the Baku-Tbilisi-Kars railroad, and thus connect to Europe. The Turkish Cooperation and Coordination Agency (TİKA) has increased the amount of developmental aid to the country. Turkey’s private sector is also interested in making new investments in Uzbekistan, while the Turkish construction sector plans to build new hotels in Uzbekistan. Ankara is determined to boost bilateral relations in many areas, such as politics, the economy, energy, the defense industry, agriculture, culture, education, environmental issues and tourism.

Erdoğan declared that the signing of these agreements would be the start of a long journey for the two countries. The two leaders decided to establish the Turkey-Uzbekistan High Level Strategic Cooperation Council, the meeting of which will be held annually. The trade volume between Uzbekistan and Turkey increased by 20 percent in the first quarter of the year and reached $1.5 billion. Erdoğan declared that the new target for bilateral trade volume is $5 billion.

After holding official meetings with his Uzbek counterpart, Erdoğan will visit Bukhara, the historical city that has an important meaning for the Turkish people. The Turkish government plans to establish two Islamic institutes. Thus, the cultural bonds between the two peoples will be revived.

After long discussions with Erdoğan, Mirziyoyev has decided to join the Cooperation Council of Turkic Speaking States, the international organization established in 2009 by Azerbaijan, Kazakhstan, Kyrgyzstan and Turkey. As a pan-Turkic international organization, the council aims to promote comprehensive cooperation between Turkic-speaking states. The Uzbek move will strengthen the influence and relevance of the organization.

Erdoğan’s historic visit will provide many political, diplomatic, geostrategic and geo-economic opportunities since Uzbekistan is a potential game changer in Central Asia. With the Uzbek opening, Turkey will have more opportunities to strengthen its Central Asian axis by promoting its relations with Uzbekistan as well as with other Turkic states. It is important for Turkey to improve its relations with Central Asian countries without damaging its relations with Russia. Today, Turkey has been trying to manage these two dimensions simultaneously. In a time when Western countries have been trying to alienate Turkey and the Middle East is in crisis and fraught with instability, Erdoğan’s opening to Uzbekistan is very significant.

Early elections, the West and the democracy debate
Previous

Kılıçdaroğlu's post-Gül plan
Next
Loading...
Loading...
We use cookies to ensure that we give you the best experience on our website. If you continue to use this site we will assume that you are happy with it.Ok