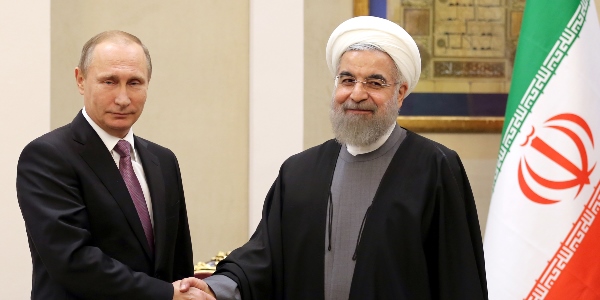 Russia and Iran: The Brewing Fight between Troubled Allies

No longer can the PYD militants shake hands with Bashar Assad and continue their on-off relationship with DAESH to expand their territory. Moving forward, the group will play defense and try to keep what they have.

Russian President Vladimir Putin on Monday took a huge risk in announcing that his air forces had accomplished their mission in Syria and that he had started withdrawing from the conflict zone. The decision will have a similar impact on the Kremlin’s move to interfere in the Syrian civil war on Sept. 30. The unanticipated step could alter the regional balance of power – again.

Read the fine print though: Russia isn’t really leaving Syria. Having inflicted serious damage to the moderate rebels, the Kremlin gets to keep two military bases and their S-400 air defense system intact. In other words, Mr. Putin could escalate the situation anytime he pleases. As a matter of fact, he issued a thinly veiled threat just days later: “We have the capacity to restore our military presence in the region within hours,” Putin said.

By staging a partial withdrawal, the Russian president proved capable of the strategic thinking necessary to consolidate his country’s position in the Middle East. Here’s what he accomplished:

Why leave Syria if the Russian campaign was so successful? First of all, the Kremlin wanted to address the concerns of the Gulf nations and Israel about the growing power of Iran, the Assad regime and Hezbollah. Moreover, the partial withdrawal created an opportunity to reduce tensions with Turkey. Finally, he effectively told Bashar Assad that he has to actually try to strike a deal in Geneva.

Mr. Putin’s latest trick, meanwhile, creates new challenges for the Assad regime and the Democratic Union Party (PYD) in northern Syria. On Thursday, the PYD and its military wing, the People’s Protection Units (YPG), proclaimed a federation in the area, which raises new questions about their future goals, and the future goals of the PKK, in the Middle East. Some readers might recall that the PYD was denied a seat among opposition groups at the Geneva-III peace talks. The regime, likewise, had refused to include PYD representatives among their ranks. For the first time since the civil war began, the PYD was dealt a bad hand.

No longer can the PYD militants shake hands with Bashar Assad and continue their on-off relationship with DAESH to expand their territory. Moving forward, the group will play defense and try to keep what they have. Bashar Assad and the PYD leaders don’t see eye to eye on territorial integrity. Seeking to regain control over northern Syria, the regime will soon turn against the PYD and seek to prevent the formation of a Kurdish entity. To make matters worse, the PYD, operating under the ideological guidance of the Kurdish Communities Union (KCK), has a broad definition of autonomy including control over the economy, security and defense. Having trained and equipped their militia thanks to the generous donations of the United States and Russia, the PYD leadership will seek to turn militants into government-salaried guardians of the autonomous zone and play a role akin to the peshmerga forces in the Kurdistan Regional Government (KRG).

While the United States, Syria, Iran and Turkey oppose federalism, the PYD’s most recent move received a warm response from Russia and Israel. Moving forward, it would be no surprise to see the partnership between Iran and Russia crumble.

From Civil War to Military Coup
Next
Loading...
Loading...
We use cookies to ensure that we give you the best experience on our website. If you continue to use this site we will assume that you are happy with it.Ok