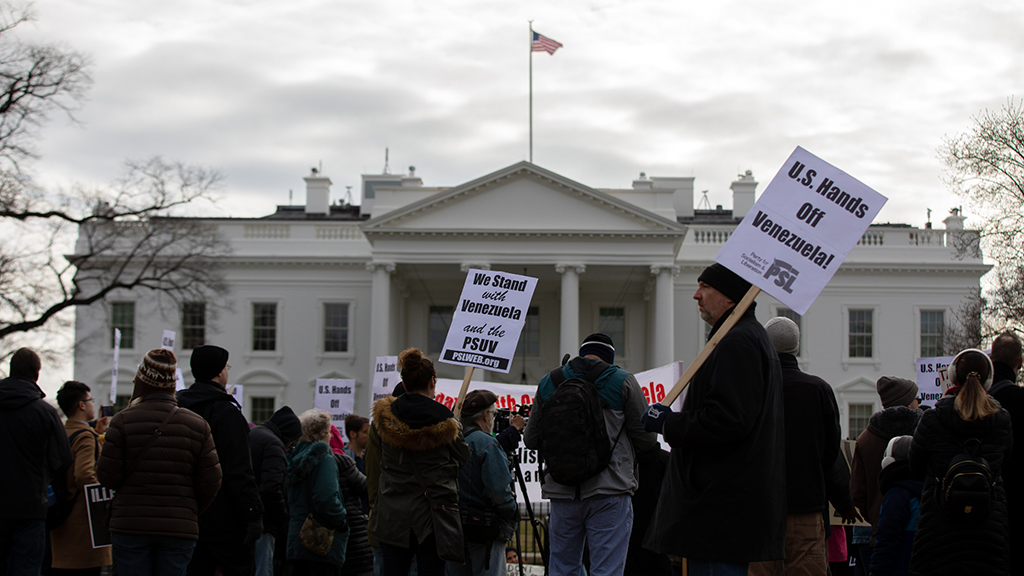 A group of Venezuelans stage a protest in support of Venezuela's President Nicolas Maduro in front of White House in Washington, United States on January 24, 2019.

As the international system changes and rising powers challenge U.S. predominance around the world, the direction of Washington's foreign policy will be extremely important in shaping future geopolitics

Bill Clinton for example. In the 1992 elections George H.W. Bush was the candidate who had a resume on foreign policy like no other candidate in the last century probably. He served as the U.S. ambassador to China and U.S. ambassador to the United Nations. He was the director of the Central Intelligence Agency. He became vice president of the U.S. and served for 8 years. The Berlin Wall fell and Soviet Union collapsed during his presidency and he also won a war against Iraq in the Gulf, which according to many ended Vietnam trauma of the U.S. In fact when he was running for re-election many argued that he had such a powerful incumbency effect that many high profile democrats decided not to run. The governor of Arkansas, with no foreign policy credential became his challenger in the 1992 elections, a candidate who promised to focus on domestic matters instead of foreign policy. Bill Clinton won the election.

Eight years after this surprise victory of “putting our house in order type” candidate, this time his Vice President Al Gore ran for office. Al Gore was in Congress for 16 years before becoming the vice president of the U.S. In the House of Representatives he served in the Energy and Commerce committee and House Intelligence Committee. Later when he became a member of the Senate he served in the Armed Services Committee. During his vice presidential tenure he was the U.S. diplomat who negotiated the Kyoto Protocol and expressed strong opinions about foreign policy. When he became the Democratic nominee for the presidency, his rival was George W. Bush, governor of Texas. A candidate with no foreign policy experience, who was criticizing U.S. military overstretch and objecting any attempt to engage in nation building abroad. Bush won.

Similar outcomes took place in the 2008 elections between Barack Obama and John McCain. John McCain served in Congress for more than 35 years, 31 of them in the Senate. Especially in his later years McCain became one of the most powerful voices on foreign policy in the U.S. Senate. When the war in Iraq entered one of the most challenging periods, he stood out as one of the architects of the surge movement. In every major foreign policy issue in the U.S. he became a go-to senator for journalists. His rival in the elections was Barack Obama, a junior senator from Illinois, with no foreign policy credentials. Obama won the election.

The Clinton-Trump race was no different. Hillary Clinton served as the first lady for eight years, served in the Senate for eight years, where she was a member of the Armed Services Committee. She quickly became an outspoken member of the Senate on foreign policy issues. More importantly in the first term of the Barack Obama presidency, she served as the secretary of state of the U.S. She was the architect of the Asia Pivot in U.S. foreign policy, one of the most important changes in the orientation of U.S. foreign policy in the recent decades. When the race between her and Trump started many assumed that it would be a smooth victory for Clinton. She has international stature. In presidential debates on foreign and security policy, she presented herself as the informed and capable candidate to increase U.S. standing around the world, increase the U.S. allies and posture. Donald Trump had opinions about U.S. foreign policy but did not have an experience. He called NATO obsolete and promised to withdraw the U.S. from multilateral engagements, such as the Trans-Pacific Partnership (TPP). He was another candidate that focused on “putting the house in order.” Trump won the election.

In the next few years, as the international system is changing and as some rising powers start to challenge U.S. predominance around the world, the direction of U.S. foreign policy will be extremely important in shaping future geopolitics. In this critical juncture, foreign policy elites need to leave their ivory tower and tightly knit circles in Washington and should educate, engage and be educated by the public opinion. Trying to derail the president’s agenda, to write pieces critical about the direction of U.S. foreign policy or to sink into despair is not a solution for them.

It is a new period now. They have to understand that the only factor that can really convince decision makers in foreign policy is public opinion. Presidents pay attention more to their approval ratings than their popularity among the foreign policy elite. Being a tone-setter does not always mean that one is at the same time a game-changer.

The Gulf needs Turkey to contain Iran
Next
Loading...
Loading...
We use cookies to ensure that we give you the best experience on our website. If you continue to use this site we will assume that you are happy with it.Ok