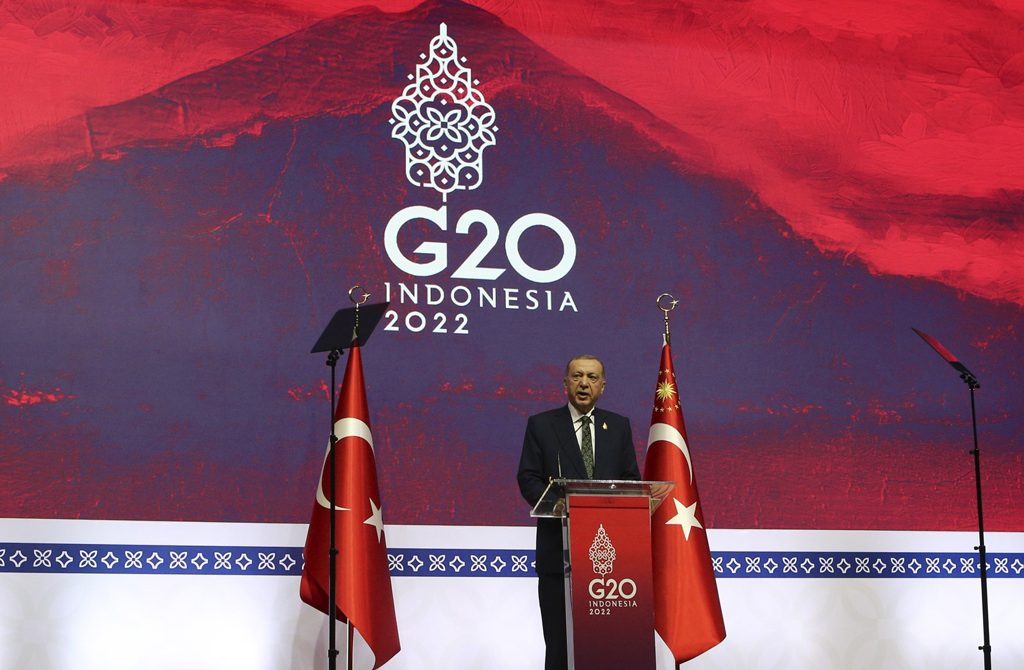 President Recep Tayyip Erdoğan gestures as he speaks during a press conference on the sidelines of the G-20 Leaders' Summit at Nusa Dua in Bali, Indonesia, Nov. 16, 2022. (AP Photo)

President Recep Tayyip Erdoğan delivered several key messages in an interview with Turkish journalists on his flight back from the G-20 Summit in the Indonesian island of Bali.

Let me start by saying that his meetings with Western leaders had left the Turkish president satisfied. Accordingly, Erdoğan expects U.S. President Joe Biden – whose party retained its Senate majority – to keep his promises regarding the F-16 fighter jet deal. Despite sarcastically mocking French President Emmanuel Macron for recently accusing Türkiye of colonialism, he wants to be on good terms and prevent any negative developments. Specifically, Erdoğan and Macron discussed the SAMP/T missile defense systems project.

Judging by the Turkish president’s comments, his meeting with Italian Prime Minister Giorgia Meloni was the most productive. The female politician, who leads a coalition government that includes, among others, former Prime Minister Silvio Berlusconi, wants to work with Türkiye on four issues: Defense (SAMP-T), energy (ENI), migration and Libya.

It was noteworthy that Erdoğan, who delivered a warm message about normalization with Egypt and Syria’s Bashar Assad administration, signaled that “a fresh start” could be in the books after the June 2023 elections.

At the same time, the Turkish president successfully negotiated a 120-day extension for the grain deal and spoke by phone with incoming Israeli Prime Minister Benjamin Netanyahu – a continuation of his efforts for normalization, reconciliation, problem-solving and new collaborations.

Let us also recall that Türkiye hosted a meeting between the U.S. and Russian intelligence chiefs regarding nuclear weapons.

It goes without saying that Erdoğan has always attached great importance to diplomacy. Nonetheless, his current approach reflects his concerns over the risks attached to growing disagreements in the international arena, especially since the Russian invasion of Ukraine, and Türkiye’s ability to make a difference.

Specifically, Erdoğan’s diplomatic achievements during the Ukraine crisis reshaped his international profile as a leader that promotes reconciliation for crisis resolution and pursues a balanced policy.

It is noteworthy, too, that the final communiqué of the G-20 Summit signaled that the policy of many countries was aligned with the Turkish policy toward Ukraine.

Meanwhile, Erdoğan’s pledge to continue nurturing Türkiye’s external relations after next year’s elections seemed like a message to the West.

Erdoğan not only stabilizes Türkiye and its neighborhood but also shows the kind of leadership that contributes to the resolution of international crises. Current and former European leaders should recognize that fact and act accordingly to promote European security and stability.

President Erdoğan also struck a conciliatory tone on domestic politics in his interview during his press availability. Welcoming a visit by the main opposition Republican People’s Party (CHP) Chairperson Kemal Kılıçdaroğlu to the Togg (electric car) factory, the Turkish leader also invited him to the Presidential Complex.

Yet, Erdoğan’s most noteworthy message, however, related to the Good Party (IP) – which he urged to “genuinely transform itself to abandon the table (for six) and adopt a national-native stance.” What made that statement more interesting was its timing, as it came after a meeting with the pro-PKK Peoples’ Democratic Party (HDP) and the Nov. 13 terror attack in Istiklal Street by the terrorist organization PKK/YPG.

Many wondered why Erdoğan repeated his call to the Good Party, as the tug-of-war between that party and CHP over the joint presidential candidate could not be contained within the opposition bloc or even the headquarters of the relevant parties. The question was whether Erdoğan’s message would strengthen or weaken Akşener’s hand at the negotiating table. Would it help CHP impose Kılıçdaroğlu’s candidacy on the Good Party?

It could be impossible for Akşener to persuade the Good Party base if their party settles for a secondary role within the “table for six” – as it had in the 2019 municipal elections.

Meanwhile, Erdoğan could reach out to Good Party voters by questioning that movement’s “national-native” credentials.

To sum up, the Turkish president is building on his momentum in international politics to unveil his discourse and moves for party politics. For now, he is opening some cards and running some tests. Judging by what we have already seen, the campaign will focus on the Good Party and HDP.

Target of terrorism is the stability of Türkiye
Previous

Good Party: The party in the middle of the fault lines
Next
Loading...
Loading...
We use cookies to ensure that we give you the best experience on our website. If you continue to use this site we will assume that you are happy with it.Ok