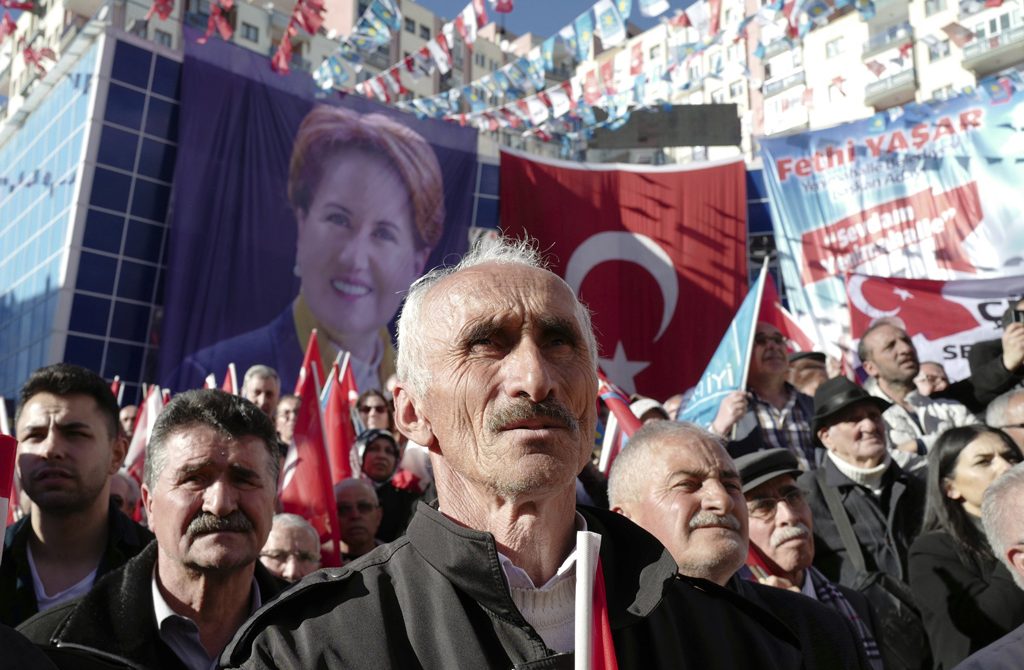 People listen to the chairperson of the opposition Good Party (IP) Meral Akşener, as she addresses her supporters during a rally in Ankara, Türkiye, March 25, 2019. ( AP Photo)

Good Party: The party in the middle of the fault lines

Issues show that the Good Party remains most vulnerable to internal and external maneuvering by the two alliances. Indeed, that movement is at the heart of identity politics and ideological faultlines, too. Until now, Akşener has not surfed successfully on those faultlines – which will become shakier as the election draws near.

President Recep Tayyip Erdoğan recently asked the Good Party (IP) to “adopt a national-native stance, revisit their position and abandon the ‘table for six.’” That call turned all eyes to that party’s chairperson, Meral Akşener.

Many observers were curious to see why Erdoğan issued that statement, knowing full well that the Good Party would reject his offer. Some commentators even claimed, somewhat outlandishly, that Erdoğan was “afraid” of the opposition bloc.

In truth, Erdoğan’s call was a perfect example of political maneuvering. That move represents a brand of politics to be completed with additional steps – despite the Good Party’s rejection.

It is a well-known fact that Türkiye’s presidential system requires any candidate to reach a simple majority. That requirement has been the driving force behind alliance politics. To be clear, the People’s Alliance and the Nation Alliance have resorted to the same tactics since August 2018, to get a sense of each other. They try to drive a wedge among the rival alliance’s members while preserving the unity of their alliance.

That outreach is not limited to Akşener and her movement. Instead, the People’s Alliance brings up the “national-native” criteria regularly to connect with the supporters of the “table for six” members.

Accordingly, Erdoğan criticizes the CHP chairperson, calling him “Mr. Kemal,” to contribute to the main opposition leader’s impositions on the opposition bloc and the CHP leadership’s confidence. At the same time, he calls for a “national-native transformation” to increase the value of the Good Party and its leader for the “table for six.”

Indeed, Akşener did not simply reject Erdoğan’s proposal. She immediately identified the Good Party as Türkiye’s cornerstone: “No side can do anything without involving the Good Party.”

Stating that she was born into a family with CHP and Democratic Party (DP) links, Akşener has been taking credit for opposition victories in 11 major cities in the 2019 municipal elections. Having told the CHP that “we have paid our debt,” it is impossible for the Good Party to be unaware that none of those major cities are run by their party. In other words, the CHP benefited disproportionately from its collaboration with the Good Party – which has been able to win some tenders from opposition-controlled municipalities and get some of their people hired.

If the same thing happens next year, the Good Party will have settled for being a minor right-wing party in Turkish politics. That fear, in turn, causes problems within that movement and takes a significant toll.

There are some problems that the Good Party, which aspires to be “the largest center-right party,” cannot address:

1. If CHP Chair Kılıçdaroğlu becomes the opposition bloc’s joint presidential candidate, Akşener will have been reduced to a secondary player within the “table for six” – let alone aim for the leadership of center-right politics.

2. As a secondary player, Akşener would find it more difficult to connect with conservative and secularist right-wing voters simultaneously.

3. Whereas the Democracy and Progress Party (DEVA) and the Future Party (GP) have focused on common policies and the transition process, the Good Party has consistently complained about the joint presidential candidate, the headscarf issue, and the Peoples’ Democratic Party (HDP). As such, the movement has been unable to get the opposition bloc to support its policy proposals or bring additional stakeholders to the table.

4. The Good Party’s moves regarding the joint presidential candidate have been the target of disciplinary and questioning criticism from the CHP circles.

5. Originally commanding a Turkish nationalist organization, Akşener finds it difficult to compete with the DEVA (and even the CHP) for secularist right-wing voters.

6. Those groups, which desperately want to admit the HDP into the opposition bloc, respond to the Good Party’s view that Kılıçdaroğlu cannot win by saying that “we cannot win without the HDP.”

7. As the People’s Alliance urges the Good Party to be a “national-native” movement, the HDP has called Akşener “an enemy of the Kurds.”

All those issues show that the Good Party remains most vulnerable to internal and external maneuvering by the two alliances. Indeed, that movement is at the heart of identity politics and ideological faultlines, too. Until now, Akşener has not surfed successfully on those faultlines – which will become shakier as the election draws near.

The CHP’s ego boost – “this is our time” – and the Good Party’s ambition to become the largest right-wing party clash with each other. Erdoğan merely highlights that fact on occasion.

'We'll make them pay price': Türkiye's message on terror to world
Next
Loading...
Loading...
We use cookies to ensure that we give you the best experience on our website. If you continue to use this site we will assume that you are happy with it.Ok