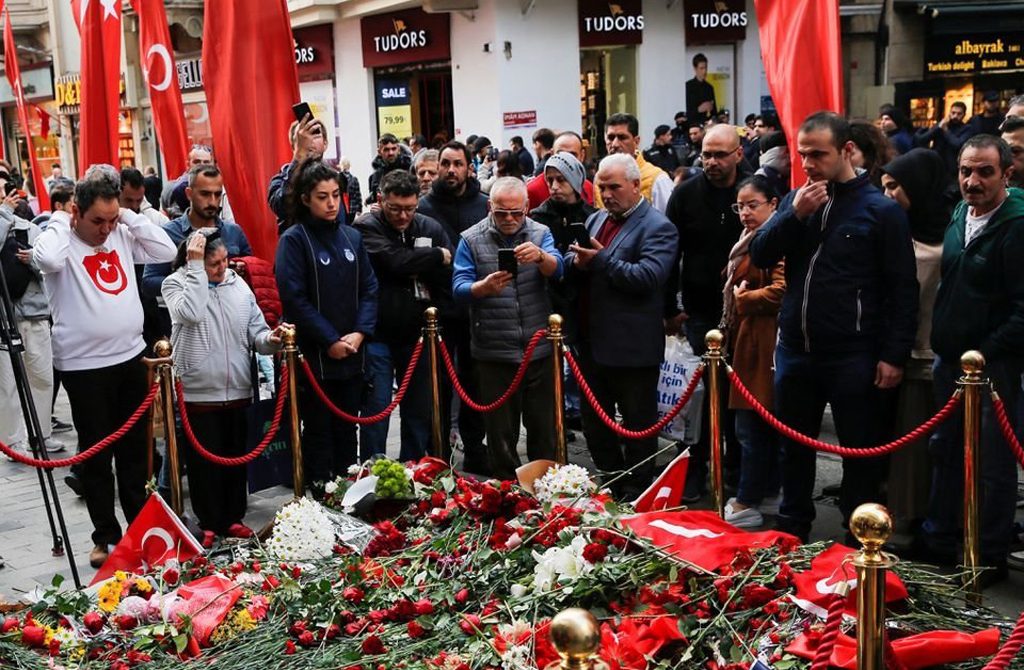 People lay flowers to pay tribute to the victims of a Sunday's blast that took place on Istiklal Street, in Istanbul, Türkiye, Nov. 15, 2022. (Reuters Photo)

Target of terrorism is the stability of Türkiye

The terrorist attack perpetrated by the PKK terrorist group's Syrian wing YPG on Istanbul's Istiklal Street claimed six lives and left 81 people injured. Without a doubt, that act of terrorism – the likes of which Türkiye’s security forces have thwarted dozens of times – targeted the country’s security, stability, peace and growth.

The terrorist attack perpetrated by the PKK terrorist group’s Syrian wing YPG on Istanbul’s Istiklal Street claimed six lives and left 81 people injured. Without a doubt, that act of terrorism – the likes of which Türkiye’s security forces have thwarted dozens of times – targeted the country’s security, stability, peace and growth.

In the wake of terrorist attacks, it is necessary to demonstrate that the Turkish state and its citizens combat terrorism together and will not give up under any circumstances. That is no time for any war of words that could fuel confusion.

It is also important that the authorities captured a woman from Ain al-Arab, who placed the bomb on a bench to directly target civilians. The female terrorist confessed to police that she had been trained by the PKK – which established, once again, why Türkiye must eliminate the entire “terrorist corridor” in northern Syria without further delay.

PKK terrorists did not claim responsibility for the attack to ensure that the Western government would not treat them as an organization that directly targets civilians.

It is no secret that Türkiye has made significant achievements in the fight against the Gülenist Terrorist Group (FETÖ), Daesh, the PKK terrorist organization and its Syrian wing, the YPG. Moreover, the country conducted successful operations at home and in northern Syria to take out PKK/YPG’s middle and senior ranks, bringing the organization to the brink of collapse.

Indeed, Ankara had long been frustrated with the large number of PKK/YPG bombings in Turkish-established safe zones in Syria. That is why the terrorist attack in Taksim will lead Türkiye to take its crackdown on PKK/YPG to the next level. In this sense, the Turkish government will bring up the issue of removing all terrorists within 30 kilometers (18 miles) of Türkiye’s borders in meetings with the United States and Russia. At the same time, it is necessary to warn Iran, once more, about the PKK.

It is not enough to condemn terrorist attacks and share Türkiye’s pain. The Western governments, together with Moscow and Tehran, need to realize that making a distinction between terrorist groups makes no sense.

At the same time, it should be obvious why Türkiye has stressed the fight against terrorism within the context of Sweden and Finland’s NATO membership applications and demanded the extradition of known terrorists.

All that is about the Turkish people’s safety – not diplomatic calculations. Accordingly, the Turkish people expect all the relevant governments to do what our alliances, neighborly relations and – above all – being human necessitate.

It is completely possible that those countries, which cannot compete with Türkiye in the diplomatic arena, would use terrorist organizations to target our nation. The best response to such efforts is to state, as a nation, that terrorism cannot undermine our unity, resilience or determination – that the rise of our country is unstoppable.

It is unacceptable that some folks on social media platforms treat terrorism like rhetorical ammunition for domestic politics. At a time when the world is growing more and more uncertain, Türkiye attracted a lot of attention thanks to its diplomatic success and as an island of stability. Our country belongs to every one of us.

Last but not least, let me note that it was shameful for The New York Times (NYT) to ignore the Turkish people in its coverage of the latest terrorist attack and instead talk about “tourists” spending time on Istiklal Street.

Ukraine war: Iran's sale of drones to Moscow will only increase its isolation
Previous

Erdoğan's Bali messages and call to IP chair Akşener
Next
Loading...
Loading...
We use cookies to ensure that we give you the best experience on our website. If you continue to use this site we will assume that you are happy with it.Ok