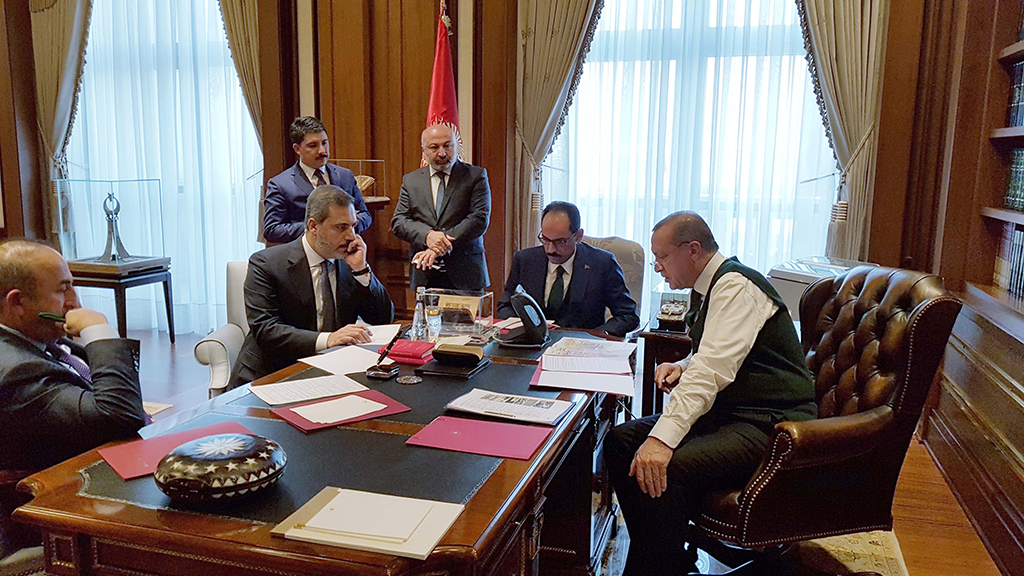 Turkey's foreign policy had a year of transition and change in 2017.

Turkey’s foreign policy had a year of transition and change in 2017. Turkish authorities struggled to move away from a reactionary and defensive foreign policy to a proactive and more constructive one. The last four years of the country’s foreign policy agenda were occupied with spillover effects and consequences of the civil wars in Syria and Iraq. Turkey experienced serious tensions and disagreements with the U.S., Russia and its neighbors over these issues. Turkey’s involvement in the Astana talks together with Russia and Iran was a major turning point that helped to at least stabilize relations with Russia. Turkey’s firm stance in dealing with the Daesh threat, its diplomatic success in preventing the isolation of Qatar, its position on the Kurdistan Regional Government’s independence referendum in northern Iraq and the recent diplomatic efforts to nullify U.S. President Donald Trump’s decision to move the U.S. Embassy in Israel to Jerusalem can be considered successful tactical diplomatic maneuvers. President Recep Tayyip Erdoğan took active initiatives and mobilized the Organisation of Islamic Cooperation (OIC) and the U.N. General Assembly on the Jerusalem issue. Turkey’s recent diplomatic efforts raised global awareness on the Palestinian-Israeli conflict.

Turkey has both serious challenges and significant opportunities for 2018. Its primary objective is to play proactive roles to deal with security challenges in its neighborhood and to normalize its relations with major global players. Normalization of relations with its neighbors will be a priority in 2018. There is a potential for improving relations with the EU and Russia on the basis of mutual interests, whereas the ongoing disagreements with the U.S. on the future of the Middle East seems to be a major potential risk. The Trump administration’s risky foreign policy steps may push Turkey and the EU and Turkey and Russia to coordinate their diplomatic efforts.

An unstable relationship with the U.S. constitutes the biggest foreign policy challenge for Turkey in 2018. The relationship may turn from a volatile partnership into a proxy conflict over the PKK’s Syrian affiliate Democratic Union Party (PYD) and its armed People’s Protection Units (YPG) and the Gülenist Terror Group (FETÖ) in the coming weeks. U.S. authorities already made their choice on the side of the YPG and FETÖ against Turkey. Continuing American military support for the YPG in Syria despite the defeat of Daesh, the ongoing Halkbank case against Turkey with FETÖ having provided documents and the unwillingness of U.S. authorities to cooperate with the Justice Ministry on the extradition of FETÖ leader Fetullah Gülen to Turkey are major signs of Washington’s tacit containment strategy for the Justice and Development Party (AK Party) government. Washington seems to prolong its self-fabricated visa crisis and probably may add additional tactics to chafe Turkey. Relations with Washington seem likely to stay sour for a while unless the two actors make significant changes in their foreign policy preferences.

The year of 2017 was very difficult in terms of Turkey’s relations with Europe, as well. It was a year of elections in many European countries, including Germany, France, the U.K. and the Netherlands. Turkey also had its own high stakes constitutional referendum in April. Due to the slow economic recovery, uncertainties related to Brexit and Trump’s unpredictable foreign policy, European voters shifted in the direction of the populist right. Catalonia’s independence push also has the potential to destabilize other autonomous regions with similar aspirations. Ankara’s EU membership candidacy and migration were critical agenda items in election campaigns in EU member countries. European politicians used debates about Turkey and Turkish-origin immigrants in their countries. EU countries’ unwillingness to help Turkey in its efforts to deal with the PKK and FETÖ was a frustrating development for the Turkish public. The EU also did not stick to its promises related to the migrant readmission agreement that was signed on June 2016.

Despite the tense exchange of denunciations and frustrations, both Turkey and the EU need each other more than any time since the end of the Cold War. The Trump administration seems to be uninterested in European security concerns. Trump expects European countries to contribute more to NATO’s defense budget. With his neo-mercantilist worldview, Trump is especially critical of Germany, which has a considerable foreign trade surplus. Uncertainties related to Brexit also haunt EU security. Strengthening security cooperation and collaboration on common agenda items will serve both Turkey and the EU’s interests.

The EU cannot more afford to continue without a medium and long-term strategic vision for its foreign policy and security. Strengthening ties and deepening cooperation with Turkey will only serve Europe’s security and prosperity. Even though EU membership continues to be a strategic priority for Ankara, both Turkish politicians and the public are less interested in experiencing continuous double standards in negotiations to reach that end. The EU needs to take some positive steps to change the existing negative stalemate in relations with Turkey. Turkey’s relations with Russia seem to be the most interesting development to watch in 2018. Whether the tactical cooperation between the two countries reaches a strategic level is the main question. Turkey’s recent decision to buy S-400 missile defense systems from Russia is an important step in this direction. However, changes in diplomatic relations with other major global players will determine the course of this development. Overall, Turkish foreign policy will start 2018 with a more promising and constructive agenda in comparison to the beginning of 2017, but there are still major uncertainties ahead.

US's failed diplomacy glitters in 2017 review
Next
Loading...
Loading...
We use cookies to ensure that we give you the best experience on our website. If you continue to use this site we will assume that you are happy with it.Ok