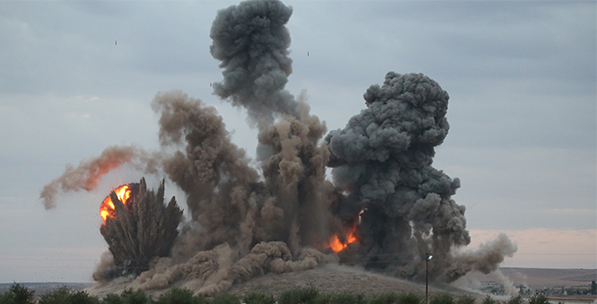 A Long Game of Chess

The anti-ISIS campaign has evolved into a chess game, played not only by Washington and Turkish officials, but also other regional actors involving a number of subsequent and contradictory moves.

The most important component of the Obama administration’s anti-ISIS strategy – with the notable exception of airstrikes – has been to provide weapons to local groups fighting against the organization. Having already announced that there would be no boots on the ground, the U.S. government thus opted for a tactic that had failed to yield positive results in Yemen and Somalia before. Meanwhile, a number of analysts pointed out that the anti-ISIS coalition had simply developed an insufficient war strategy and added that arming local groups would not be enough to reach the coalition’s goals.

Today, Turkey remains among a number of countries that are part of the international coalition yet voice their dissatisfaction with Washington’s road map. There are a few reasons behind their frustration: First and foremost, the U.S. strategy does not seek to topple the Bashar Assad regime in Damascus and therefore, at least for the time being, does not welcome proposals to create safe zones and no-fly zones inside Syria. Furthermore, the road map fails to clarify what will happen in Syria once ISIS militants are eliminated. Most important, however, is that Washington, unwilling to commit its land forces to the effort, provides weapons to the PYD alongside other groups currently fighting ISIS.

Just when Kobani, a Syrian border town, almost fell to ISIS forces, the U.S. government not only began to launch air strikes against ISIS targets but also airdropped weapons to PYD militants – some of which ended up in the hands of ISIS. Around the same time, President Recep Tayyip Erdoğan reiterated his position that the PKK and PYD were part of the same terrorist groups and remarked that it was wrong to provide weapons to PYD fighters in an attempt to voice his country’s concerns about the U.S. strategy. The Turkish government’s frustration, however, will understandably remain intact: As a matter of fact, the anti-ISIS campaign has effectively evolved into a chess game, to use Prime Minister Ahmet Davutoğlu’s terminology, closely associated with the regional balance of power. Observers realize that this game, which is played not only by Washington and Turkish officials but also other regional actors, will involve a number of subsequent and contradictory moves.

The argument that Turkey stood idly by as the Kurds of Kobani lost their lives, coupled with allegations of Turkish support for ISIS, has recently evolved into a full-blown media campaign which paved the way for the wave of violent protests on Oct. 6-7. Again, the same campaign reflected international pressures to persuade the Turkish authorities to tackle the problem in Syria. Meanwhile, Turkey responded to claims about its alleged eagerness to watch Kobani fall to ISIS with a new move: Instead of allowing free passage to PKK militants, the Turkish government opened a corridor to allow 200 members of the KRG’s peshmerga forces to be stationed in Kobani. The government’s most recent step, which local media quickly identified as a U-turn, represents a dynamic component of the broader struggle against ISIS militants. Currently, various active players in the region – i.e. the United States, Turkey, the peshmerga, PYD and ISIS, among others – take new steps and will no doubt make additional moves down the road.

Thus far, ISIS has proved capable of taking tactical steps to put pressure on the international coalition by taking 49 Turkish nationals hostage following the fall of Mosul and attacking Kobani. Surely enough, the organization would like to plant its flag on Kobani and persuade new warriors to join its ranks. Having called on Muslims around the globe to “migrate to the Islamic State,” ISIS continues to display greater dynamism than al-Qaida. Meanwhile, Kurdish actors including the peshmerga and PKK obviously seek to seize the opportunity to become more influential in the region. By supporting the peshmerga, the Turkish authorities attempt to prevent the PKK, which believes to have established part of a broader Kurdish polity in Rojava, from accumulating g

Borders and Youth in the Middle East
Next
Loading...
Loading...
We use cookies to ensure that we give you the best experience on our website. If you continue to use this site we will assume that you are happy with it.Ok