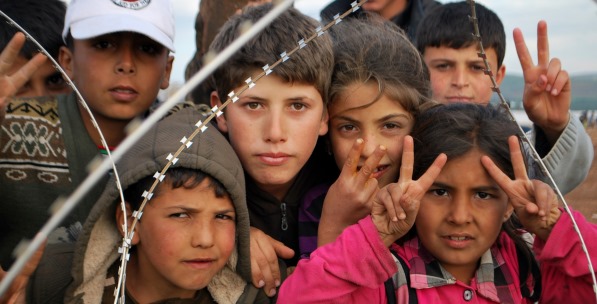 Borders and Youth in the Middle East

World War I meant the emergence of a new regional order that drew the borders between societies; however, the psychological and ideological borders were more destructive for the region than the psychical ones.

One of the most interesting movies about the borders in the Middle East is without a doubt, Sinan Çetin’s “Propaganda.” The movie depicts the story of a town, most probably in southeast of Turkey, divided into two as a result of the border delimitation between Turkey and another state. A group of officers from Ankara arrive and start dividing the town into two parts with barbed wire they brought from Ankara. At the initial phase, the people of the town approach the issue as a joke because of the absurdities that the new border brought, however they understand the consequences of it later. When the officers try to explain the significance of the borders to the people of the town it does not make sense to many villagers. For one, they do not understand what the border is for since they do not consider the villagers that remained on the other side of the border as enemies. Moreover, they do not understand why they need passports. Small skirmishes on the border result in the end of friendships and economic problems for the town. However, the steadfast government officers try to convince the villagers that the state knows best and if the “father state” says so, the villagers need to do it.

2014 is the centennial of the beginning of World War I, which ended four years later and changed the world. But for the Middle East, the change was more dramatic than most other parts of the world. For the region, World War I also meant the emergence of a new regional order that drew the borders between societies and created nation-states in the region. However, the physical borders were just the beginning of the story. The more significant boundaries that kept the societies of the region apart from each other emerged during the formation period of nation-states. A plan by British and French officers to share the spoils of the war became a source of friction and conflict in the Middle East. Especially the authoritarian structure of nation-states and the nation-building process created different narratives and histories for these countries and leaders tried to construct different identities. This led to the spread of nationalisms that aim to assimilate and persecute minorities, prejudices against the “other” and stereotypes that kept the societies apart from each other. In fact, the psychological and ideological borders were more destructive for the region than the psychical ones. For example, for decades the people of Turkey and the Arab world had limited interaction. Stereotypes and prejudices led to the emergence of psychological borders between these societies and they could not have meaningful dialogue or conversation.

For the last few years there has been an increasing degree of communication and dialogue between these societies. Especially the youth in Turkey and Arab countries are interacting more regularly, exchanging views and sharing opinions about each other. They are learning each other’s perspectives in meetings and discussing issues that impact the region. This weekend while Turkish and Arab social scientists convened at a meeting in Amman, two youths from these respective societies came together in Istanbul for a meeting organized by the Turk and Arab Youth Congress to discuss regional matters. These interactions demonstrate the continuation of optimism in both societies in such a tumultuous time. The excitement of participants and organizers in these meetings demonstrate that despite the borders between the countries, they can become more permeable, allowing social, economic and cultural relations and create better understanding between societies in this region. It is what is needed most during this period of conflict in the Middle East.

A Long Game of Chess
Previous

How to Abolish the Board of Higher Education
Next
Loading...
Loading...
We use cookies to ensure that we give you the best experience on our website. If you continue to use this site we will assume that you are happy with it.Ok