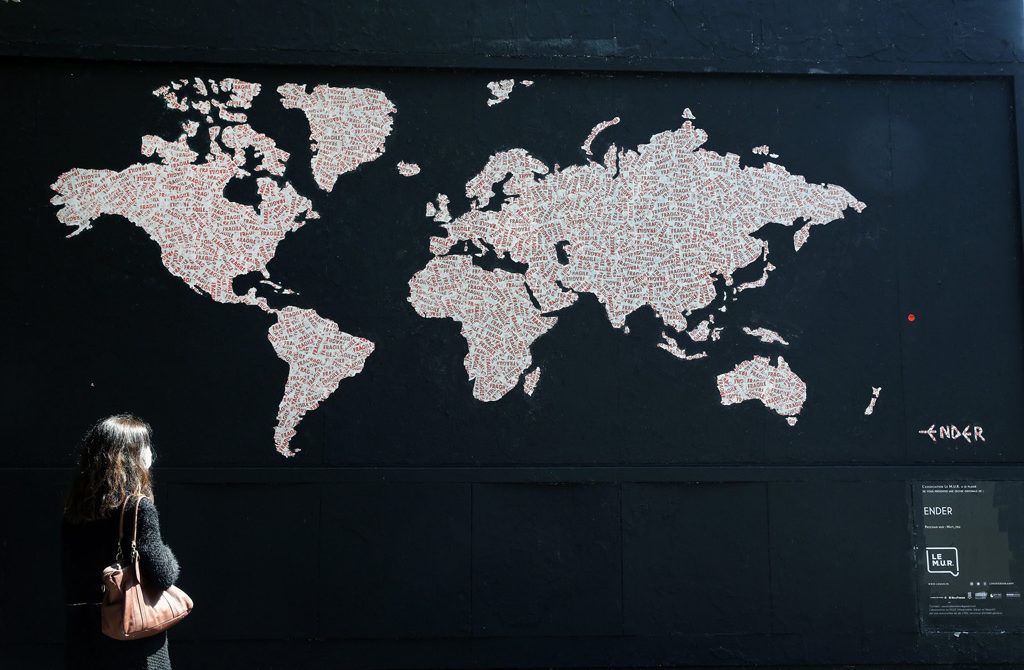 A woman wearing a protective face mask looks at a mural depicting a world map made with tags reading "Fragile" by French street artist Ender, Paris, France, May 28, 2020. (Photo by Getty Images)

Whither the international system: Ideological rivalries

The future of the international system is being debated fiercely nowadays. Everyone knows that the liberal order, backed by United States hegemony, is breaking down. Washington’s comeback isn’t widely expected to restore liberal order either.

The future of the international system is being debated fiercely nowadays. Everyone knows that the liberal order, backed by United States hegemony, is breaking down. Washington’s comeback isn’t widely expected to restore liberal order either.

At the heart of the international system debate is the competition between the U.S. and China. Many observers have said, since former U.S. President Donald Trump’s trade war, that a new Cold War has started between Washington and Beijing. That the Joe Biden presidency kicked off with escalation seems to support that claim.

The war of words between American and Chinese diplomats at the March 18 meeting in Alaska led more people to agree that a Cold War between those two superpowers was inevitable.

China not same as Russia

Others disagree, however, noting that a comprehensive Cold War (akin to what occurred between Washington and Moscow) simply cannot occur between the U.S. and China. Thomas J. Christensen is among those thinkers.

In his most recent article, which appeared in the magazine Foreign Affairs, Christensen posits that the U.S.-China rivalry, whilst real and dangerous, is unlike the Cold War with the Soviet Union for three reasons. Firstly, Washington and Beijing are not involved in a global ideological struggle to win over third parties.

Today’s globalized world cannot be divided into two distinct economic blocs. Another point is that the U.S. and China do not lead competing alliances that engage in bloody proxy wars – such as Korea and Vietnam.

Nor does Beijing intend to impose a policy of rival blocs on its small number of allies. Any attempt by Washington to fuel such tensions would result in the alienation of American allies with strong economic links with China.

The second point, in my opinion, is more accurate. Washington will translate everything about Beijing into Cold War terms for long years, as the “Chinese threat” stays on the agenda.

Despite China’s efforts to steer clear of confrontation, the U.S. wants to expedite the inevitable. It subscribes to a policy of containment, whereby the various elements of Beijing’s commercial empire, including the Belt and Road Initiative (BRI), infrastructure works and 5G networks, are on Washington’s radar.

Whereas the Americans may effectively contain China in the Asia-Pacific region, the European Union seems to be harder to persuade.

Indeed, U.S. Secretary of State Antony Blinken said at a meeting of NATO foreign ministers that the Biden administration would not force U.S. allies to choose between Washington and Beijing.

The international system, therefore, will “exhibit characteristics of both bipolarity and multipolarity” in the words of Richard N. Haass, president of the Council on Foreign Relations and Charles Kupchan, professor of international affairs.

The geopolitical and ideological rivalry between the U.S. and China is not expected to have global coverage. The EU, together with Russia, India, Brazil, Indonesia, Nigeria, Turkey and South Africa, will maintain some level of autonomy to pursue a balance-of-power policy.

As Washington and Beijing carefully avoid unstable parts of the world, regional powers will find more room for maneuver. Under the leadership of President Recep Tayyip Erdoğan, Turkey will be among those nations that will reap the benefits of great power competition in the future.

What is EU planning for its Turkey policy?
Next
Loading...
Loading...
We use cookies to ensure that we give you the best experience on our website. If you continue to use this site we will assume that you are happy with it.Ok