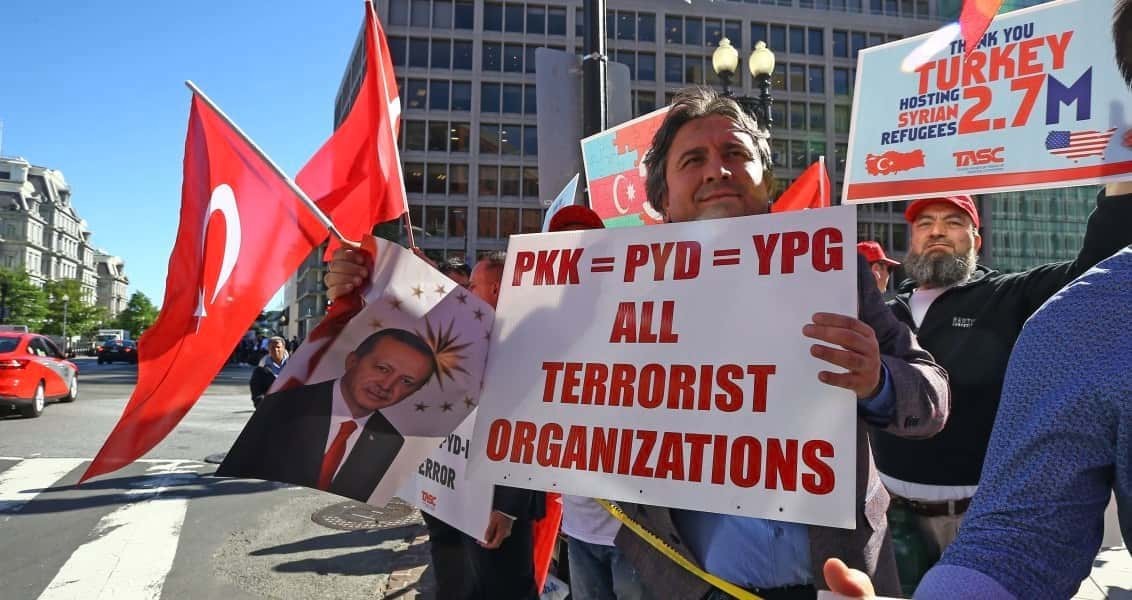 How can the U.S. guarantee against possible aggression from the YPG to Turkey following the attack?

It is nothing new, however it shocks many people in Turkey each and every time they see a U.S. military serviceman hanging out with and being briefed by a member of the PKK, a designated terrorist organization by the U.S. and Turkey. For the last few years we have been witnessing this rather interesting situation in which the U.S. draws an arbitrary distinction between the PKK and its Syria branch and declare that the People’s Protection Units (YPG) is a partner in the fight against terrorism.

The Turkish public was shocked, disappointed, frustrated and angered by this policy but it is still not accustomed to this rather unbelievable proposition of expecting Turkey to understand the training and arming of an organization that poses a serious risk to the national security of Turkey. We are not sure on what grounds the U.S. administration expected the acceptance of this proposal by the Turkish government. We are also not sure if the Turkish government was provided with a clear exit strategy following the destruction of Daesh in the region. Who would be responsible for the return of all the military equipment? How can the U.S. guarantee against possible aggression from the YPG to Turkey following the attack? In addition, did the planners of this policy ever think about the possible aftershocks of this operation, in the sense of the emergence of more significant problems between two countries? The long term strategic implications of this operational maneuver probably were not taken into consideration by the planners of the YPG enforcement.

When Brett McGurk visited Kobani and posed for a photograph with YPG members it shocked the Turkish people. When the U.S. soldiers started to wear the YPG insignia on their arms during operations, many could not believe what they were seeing. Now after the bombing of YPG targets by Turkey, when U.S. servicemen were one again shown being briefed by a PKK member, it upset a large segment of the society, including, of course, the members of the security forces who faced PKK attacks and lost hundreds of their friends in this fight. Later in a video posted online, one can hear that people around the U.S. serviceman were chanting slogans against Turkey.

Of course, as I mentioned at the beginning, this may not be something new but there is an increasing consolidation of negative opinion against the U.S. and its actions in northern Syria. Taking steps in the region at the expense of the national security of a NATO ally and at the expense of the majority of the population in that particular region does not promise long term stability in the region. One of the most significant expectations of Ankara from the U.S. administration was the understanding of Turkey’s concerns in regards to the YPG. In his column in the Washington Post on April 23, David Ignatius mentioned that some within the new administration have started to pay more attention to the issue. He wrote: “The U.S. Central Command recommended a quick move to capture Raqqa, led by a force commanded by Syrian Kurds. The problem is that Turkey regards these Kurdish fighters, known as the YPG, as a deadly threat… While respecting Centcom’s recommendations, and its sense of urgency, Mattis was persuaded by Tillerson and others to conduct a more careful review of policy. A quick hit on Raqqa that enraged Turkey might prove to be a tactical success but a strategic setback.”

Of course when we put together the reactions and tweets from some authorities in the U.S. following Turkey’s strikes on the PKK. But YPG targets and the reporting of David Ignatius, it demonstrates that there is still debate within the U.S. administration about the operation in Syria.

The Raqqa operation will totally destroy Daesh or any other terrorist group and to attempt to do this through the help of another terrorist group sounds very problematic for many in the region. The long term fight against terrorist groups in the region necessitates an institutional framework of counterinsurgency together with an international counterterrorist approach. This requires active cooperation among the states that are not threatened or destabilized by terrorist organizations.

In countries like Turkey whose public opinion is extremely attentive to foreign policy, such a successful operation and fight against terror also necessitates confidence-building measures that will bring countries closer together. To pose with members of the PKK is not one of these measures.

The European Union is Becoming a Burden for Turkey
Previous

A Busy Month of May in Turkey
Next
Loading...
Loading...
We use cookies to ensure that we give you the best experience on our website. If you continue to use this site we will assume that you are happy with it.Ok