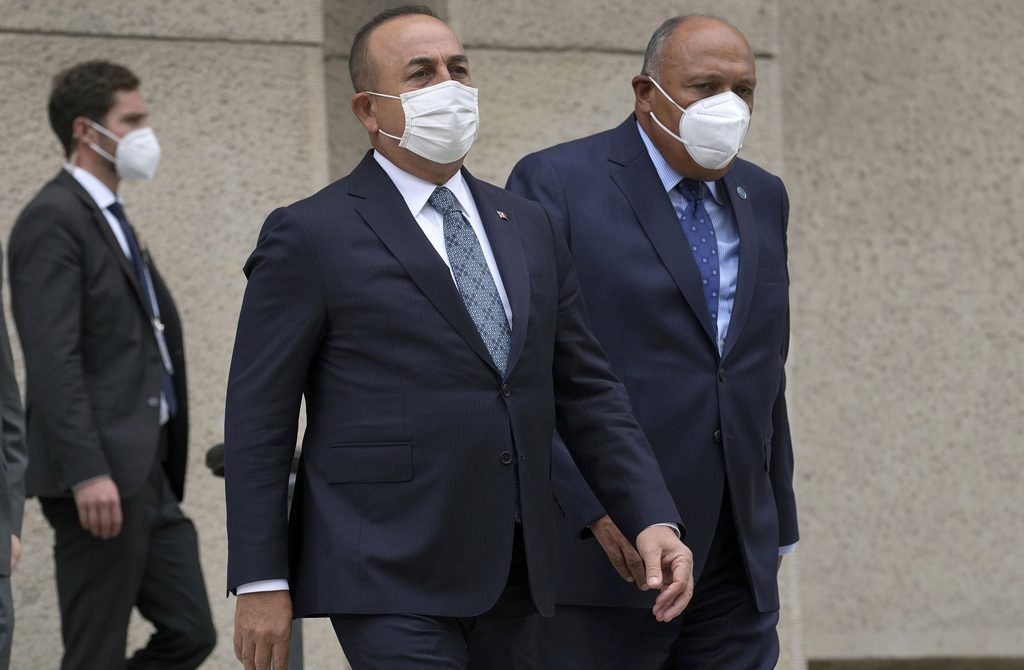 Turkey’s Foreign Minister Mevlüt Çavuşoğlu (L) and his counterpart from Egypt, Sameh Shoukry (R) arrive for a group photo during the Second Berlin Conference on Libya at the foreign office in Berlin, Germany, June 23, 2021. (AP Photo)

The winds of ‘normalization’ over Turkey, US, Middle East

Afghanistan turned out to be an area of cooperation between Ankara and Washington, as U.S. policymakers began to describe Turkey as 'an invaluable partner in the region' – instead of 'our so-called ally.'

The recent uptick in Russian airstrikes in Idlib, paired with Russian President Vladimir Putin’s meeting with Bashar Assad last week, turned all eyes to Syria. Obviously, the United States withdrawal from Afghanistan has raised questions about that country’s military presence in Syria and Iraq as well. There were speculations that Washington was going to abandon its local allies, starting with the YPG, the Syrian branch of the PKK terrorist organization.

At this point, it is no secret that the Biden administration is following in former U.S. President Donald Trump’s footsteps by subscribing to a policy of “realignment” in the Middle East. Of course, ending “endless wars” does not mean a total U.S. retreat from the region. Instead, Washington, which has enough military bases around to defend its military and intelligence interests, lets regional players take over costly operations. For example, Afghanistan could pose serious risks for Russia, China, Pakistan and Iran after the U.S. departure.

Is it reasonable, though, to expect Washington to take similar steps in Syria and Iraq? For the record, the U.S. military presence in those countries is incomparably smaller than its former size in Afghanistan – and comes with an unmistakably lower price tag. As such, it remains unlikely for the U.S. to abandon the YPG, a terrorist entity, which Congress and some U.S. agencies support because the group was used to fight Daesh terrorists. Yet that entity will inevitably lose U.S. protection in the long term.

The Biden administration’s Middle East policy encouraged regional players to take fresh steps. Those nations, whose leaders gathered around the infamous orb with Trump, concluded that they could not reshape the region. That realization motivated those stakeholders, which had been experiencing tensions, to normalize their relations.

The Gulf states, which ended the Qatar blockade, proceeded to overhaul their ties with Iran and Turkey. The UAE, which disagrees with Saudi Arabia over Yemen and oil production, has been the most ambitious country in terms of normalization. Constantly monitoring its relations with Tehran, Abu Dhabi knows that the Biden administration has distanced itself from the UAE and Riyadh. That Washington wants to sign a nuclear deal with Iran, even after the conservative victory in that country’s presidential election, is not lost on anyone.

As such, the UAE’s decision to normalize its relations with Turkey, after seven or eight years of hostility, is directly linked to its interpretation of geopolitical changes on a regional scale. Moreover, the UAE, which faced serious problems in Yemen, was compelled to push for a compromise in Libya, where Turkey proved to be a game-changer. To sum up, the UAE realized that it could not become more powerful in the region by picking fights with Turkey.

Over the past year, Turkey, too, has been trying to turn over a fresh leaf in its troubled relationships. Normalization with the United States, the European Union, Egypt, Greece, the UAE, Saudi Arabia and Israel is on the Turkish government’s policy agenda. Afghanistan turned out to be an area of cooperation between Ankara and Washington, as U.S. policymakers began to describe Turkey as “an invaluable partner in the region” – instead of “our so-called ally.” There may have been slight softening here, but we are still at the beginning of normalization between those two countries.

Again, de-escalation in the Eastern Mediterranean resulted in rapprochement with the EU, with a focus on trade and migration. There is, however, plenty of room for improvement. Specifically, Turkey and the EU must commit to the goals of updating the customs union and facilitating visa liberalization.

The influx of Afghan migrants, too, stresses the need for Brussels and Ankara to work together. At the same time, Turkey’s normalization talks with Egypt continued last week with a second meeting in Ankara, as the two nations are encouraged to repair their ties with an eye on the balance of power in Libya and mutual interests regarding the demarcation of maritime jurisdictions in the Eastern Mediterranean. In contrast, normalization with Saudi Arabia is still limited to talks between official delegations.

Normalization with the UAE, Egypt, Saudi Arabia and Israel may serve as catalysts for each other and expedite that process. The million-dollar question, obviously, is when normalization will reach Syria – which I will try to answer on Monday.

Insight Turkey Publishes Its Latest Issue “Regional Developments and Challenges”
Next
Loading...
Loading...
We use cookies to ensure that we give you the best experience on our website. If you continue to use this site we will assume that you are happy with it.Ok