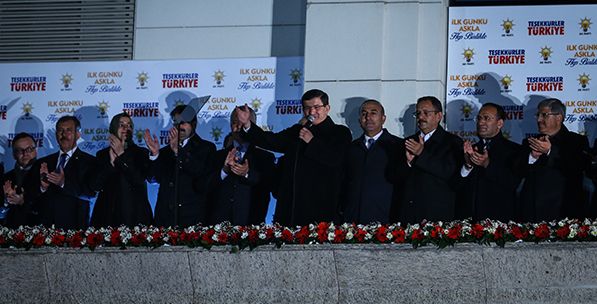 Reaching an agreement with Moscow and Washington on the Syrian civil war and fighting ISIS, the PKK and PKK-affiliated PYD in the region is the main topic on Ankara's agenda.

On Nov. 1, a combination of the electorate’s demand for stability and security, coupled with an overall dislike of coalition governments, paved the way to the Justice and Development Party’s (AK Party) success. The dual challenge of PKK and Islamic State of Iraq and al-Sham (ISIS) terrorism, which was a key issue during the lead-up to the election, will remain on the AK Party government’s agenda. As a matter of fact, Prime Minister Ahmet Davutoğlu recently stated that Turkish security forces would continue counterterrorism operations during the winter months – traditionally a period of relative calm due to inclement weather. Although structural economic reforms and proposed changes to the country’s political system will be important over the short term, foreign policy will be the number one issue for the next government.

There are a number of issues, including the Cyprus conflict and Turkey’s relations with Armenia and Israel, which the AK Party government would like address without further delay by developing new initiatives and taking necessary steps to promote dialogue. It remains unlikely, however, for Turkey and the United States to improve their relations anytime soon provided that President Barack Obama will be leaving the White House soon. Having reduced Washington’s Syria policy to counterterrorism, the Obama administration opted to watch the Kremlin’s growing military presence and political influence in the war-torn country from the sidelines. As a matter of fact, some experts claim that the U.S. even welcomed the most recent developments, provided that a stronger role for Russia might help Washington manage the crisis with relative ease.

Still, there is no doubt that Turkey and the U.S. will cooperate more closely in Syria in the foreseeable future. The first signs of improvement are already here: Pentagon spokesman Colonel Steve Warren told reporters last week that Washington would not provide weapons and ammunition to the Democratic Union Party (PYD) forces in Syria in an effort to appease the Turkish government, which has been critical of the U.S.’s role in northern Syria. On Thursday, Foreign Ministry spokesperson Tanju Bilgiç said Turkey welcomed the Pentagon spokesman’s statement, which he described as “a satisfactory development.”

Moving forward, the Turkish government, which strongly opposes the westward expansion of the PYD-controlled parts of northern Syria, signals that they might assume a more active role in the anti-ISIS campaign. Speaking in Irbil last week, Foreign Minister Feridun Sinirlioğlu argued that ISIS “placed our way of life and national security at risk” to state that Turkey planned to take military action against ISIS in the future.

According to sources, the plan isn’t limited to Syria. Instead, the Turkish government would like to assist Baghdad and the Kurdistan Regional Government (KRG) in the fight against terrorists. Turkey developed the plan, sources claim, upon the discovery of certain documents during the massive anti-ISIS raid in Diyarbakır last month, which revealed that the organization has taken steps to target Turkish citizens following Turkey’s decision to authorize the passage of peshmerga fighters to Kobani. Over the past months, ISIS suicide attacks have claimed close to 140 lives in Suruç and Ankara – which is why the anti-ISIS campaign will remain a priority item on the next government’s agenda. Ultimately, Turkey intends to become more actively involved in the Syrian conflict to empower the moderate opposition, limit PYD power and push for a diplomatic solution.

There is a perfectly good reason why the future of Syria remains a key issue for Turkey: The Syrian conflict has been a key factor in the decline of political stability since 2013 and a driving force behind the PKK’s renewed interest in violence at the expense of disarmament talks. At this point, it is virtually impossible to distinguish between Turkey’s Kurdish question and the Syrian civil war, provided that the success of PKK offshoots in northern Syria, along with the international community’s support for the PYD forces, pushed the PKK leadership away from the disarmament talks.

At the end of the day, the AK Party reclaimed its parliamentary majority by winning 317 seats in the Turkish Parliament to form a single-party government and secure another four years in the driver’s seat. The Nov. 1 parliamentary election, in this sense, will empower Turkey in the international arena and across its southern border. Moving forward, the key objectives will be to reach an agreement with Brussels over the refugee crisis, bridge the political gap with Russia, find a middle ground with Washington on the PYD’s role, assistance to the moderate opposition and the fight against ISIs. Having won 49.4 percent of the vote last week, the AK Party now has the power to take Turkey’s Syria policy to the next level.

Tony Blair and Debates About the Iraq War
Previous

G20 Antalya summit: A fresh start for Turkey in world politics
Next
Loading...
Loading...
We use cookies to ensure that we give you the best experience on our website. If you continue to use this site we will assume that you are happy with it.Ok