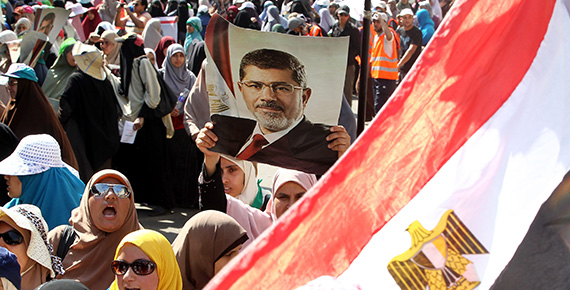 The Common Ground in Salafism and Liberalism

What is most interesting about the Egyptian coup is that both the Salafis and the liberals had no ideological or moral qualms about being in the same frame during the announcement.

One of the most memorable details of the Egyptian coup d’état was probably the backdrop of the live broadcast announcement of the coup by the army chief Sisi. The army had chosen to have a group of people sitting on both sides of General Sisi, amongst whom were the Sheik of Al-Azhar, the Coptic Pope, a Salafi and a few bureaucrats from the Mubarak regime. Liberals and secularists who did not fit into the backdrop were not delayed in offering their support for the coup publicly. Different dimensions of the Egyptian coup will continue to be discussed for some time to come. What has been experienced so far will, probably, become insignificant next to what is yet to come. However, what is most interesting about the Egyptian coup is that both the Salafis and the liberals had no ideological or moral qualms about being in the same frame during the announcement.

Is this situation peculiar to Egypt? Is there something inherently common between Liberalism and Salafism? How can Salafis who find the Muslim Brotherhood “not Muslim enough” stand side by side with the secularist liberals? How can the secularist liberals, who perceive the Brotherhood to be a “religious threat,” join hands with a movement based on the shallowest interpretation of religion, like the Salafis? These questions require serious answers both from the Salafi and the liberal perspective. Without a doubt, there will be those, both from the Salafis and the liberals, who will argue that there is nothing unusual about this merger. It is simply a strategic move based on the principle of “the enemy of my enemy is my friend.”

For me, this answer does not mean much. There has to be a stronger common ground that can bring these two opposing sides together. The question I wonder about the most is this: What are some of the characteristics the Salafism and Liberalism share? We know that both the Salafism and the Liberalism movements have strong convictions. We know that neither one of them compromises on their lifestyle argument. The common name of this refusal to compromise is selfishness. Instead of pursuing their own lifestyles among a variety of lifestyles in the community, liberalism wants to force secularism on others, and the Salafis, their religious beliefs. We know that neither liberals nor Salafis believe in the search for one’s own truth. On the contrary, each group believes to hold all the answers to all the questions of human kind.

Neither the Liberalism nor the Salafism can shake the illusion of salvation or the mission it assigns them. Consistency and coherency, for them, means achieving their goals at all costs. Both political trends are attempting to construct a political position by highlighting what they reject, first. They do not favor debate, deliberation or compromise. On the contrary, they want the idea they favor to be hegemonic and to dominate. In other words, they do not like politics of doing politics. This, without a doubt, is their biggest problem. That’s why the day we can talk about liberal or Salafi politics is the day we can be hopeful again for the future of Liberalism and Salafism!

Can the PKK Handle the Solution Process?
Previous

The PKK's Syrian Crisis
Next
Loading...
Loading...
We use cookies to ensure that we give you the best experience on our website. If you continue to use this site we will assume that you are happy with it.Ok