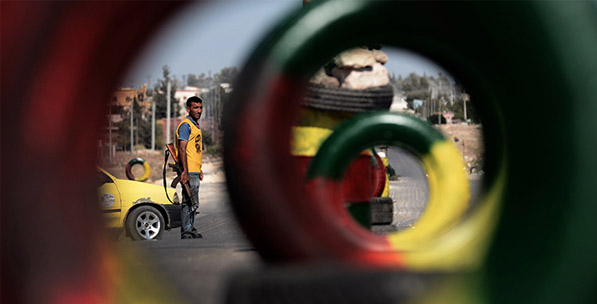 In the last few years, the Kurdish alienation has deepened more with the cunning of the PKK-PYD and the support of the Arab nationalism that has risen in the region with the occupation of Iraq.

There are two widespread perspectives in the answers to the question about the role of Kurds in the Syrian crisis. The first one is that there are those who take the solution of the Kurdish question and the disarmament of the Kurdistan Workers’ Party (PKK) with a purely security perspective, as they scream “The PKK established a state within Syria” after seeing a flag hung on the wall of a mud-brick building beyond the Turkish-Syrian border. This approach repeats the Kemalist discourses that we have heard for years and stands in front of us as the 2010s version of an attitude towards the Kurdish issue adopted by the military circles that continuously put the bills of the/its tutelage in front of the People and the civilian governments in the 1990s as they struggled with the PKK.

The second perspective is an approach again exaggerating the PKK-centered analyses and tying up the entire Middle East geopolitics to the PKK factor. It is to pull a “Rojava revolution” out of the PKK actions which also have served the Baath interests and taken place in one or two towns in the north of Syria, while overlooking the Syrian revolution that has initiated the uprising and in doing so has already known what would happen to them with a cost of hundred thousands of lives.
Both of these approaches correspond to the century-old “Sykes-Picot fears and dreams.” Both of these positions in fact wish to guard a hundred-year old status quo albeit in different ways. However, it is possible to discuss the Kurdish existence in Syria without registering for these two positions. For the Kurds who remained in the “bin-xet (below the line)” in accordance with the Sykes-Picot order, Turkey is the most attractive location. However, Turkey, which has taken its share of guarding against the Sykes-Picot by struggling with her own Kurds for years, is going through a solution and peace process at present. Relations with the Kurds in Syria have been normalized in recent years even to a level that having borders seems meaningless.

The expectation was that the Kurds would support the rebels who revolted at the cost of their lives in Syria and whose rights had been usurped for years. But that did not happen. Balances formed by the distorted internationalization process of the PKK after 1999 led to PKK’s undertaking the role of a simple passive (sometimes active) “Shabiha,” the armed group supporting the Baath in Syria. This was the biggest evil against Kurds. In the last few years, the “Kurdish alienation” has deepened more with the cunning of the PKK-The Democratic Union Party (PYD) and the support of the Arab nationalism that has risen in the region with the occupation of Iraq.

At the point we have reached today, it is the most favorable option for Turkey to devise a policy for the Kurds in Syria beyond the “fears and dreams” of declaring a “PKK state” or a “Rojova revolution” in Syria. Such a policy should embrace all Kurds in Syria in a way to overcome the Sykes-Picot. It is naivety to think that the PKK, even in the face of opposition from the Arabs, the Turkmens and even from the Kurds in Syria, will easily dispose of its obsession with the “liberated zone.”
Nowadays in Syria, as hot encounters with the Baath regime continue in the south and south-west of Aleppo, the PYD took action after the district of Khan al Asal was captured. However, no one in Syria reads this as the “Rojava revolution.” Besides, when the opponents took over the 153rd Brigade, tens of evidences were revealed to materialize the urban legends about the PYD-Baath cooperation.

Similarly again, the latest prescription of the Baath-Iran-Russia axis that suppressed the Syrian revolt is nothing but a service to the dynamics that supported and watched the overthrow of the elected president in Egypt. “For those who do not accept the Ikhwan in Egypt, let’s directly clea

The Common Ground in Salafism and Liberalism
Previous

The Coefficient System Arrives at the Ministry of Foreign Affairs!
Next
Loading...
Loading...
We use cookies to ensure that we give you the best experience on our website. If you continue to use this site we will assume that you are happy with it.Ok