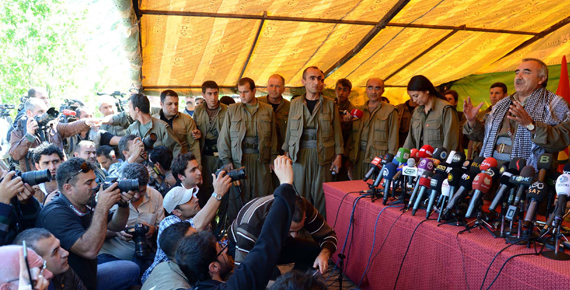 Can the PKK Handle the Solution Process?

The Kurdish grassroots almost completely supporting the solution process of the Kurdish question will also question for how long , from here on, they will continue to bear with the Kurdish political elites who have difficulty to convey the PKK leader Abdullah Öcalans message.

The main problem/question in the solution process launched on the day of Nowruz in March, 2013 was whether or not the PKK-BDP line would be able to convey Öcalan’s Nowruz message. Not even six months passed since March, but many problems have surfaced signaling how severe the “Öcalan pain” is. At the point we have reached today, we witness problems arising from the tension between those who have already adjusted themselves to the new message of Öcalan on the Nowruz day and those who cannot openly face with the message. These problems have two main characteristics.

The first one of these characteristics is the solution analyses, none of which goes beyond political nihilism, of the Kurdish question made by those who live in a world of “the Kurdish issue will exist until the end of time”. The biggest problem in this “world” is to read the Kurdish issue as the never ending nests of a Russian matryoshka doll.

Just for this reason, the steps taken daily or the steps that are to be taken in the future become meaningless. The reason is that every new step is not a path towards the ultimate conclusion but, to the contrary, arrives at the door of a new problem in the world of ambiguities of the liberal-left.

The second characteristic is those who have a serious problem – even at the existentialist level – with Öcalan’s new message. There are those who have accepted from the very beginning that if the solution process is to be maintained, ups and downs are inescapable and deadlocks and provocations are possible. These people do not share the panic attacks of those claiming “the solution process has collapsed, we are in trouble”, and the anxieties of the actors living in the aforementioned “world.” While doing so, they rely on the fact that the issue will gradually normalize due to its nature. As a matter of fact, this is not a difficult choice or approach. Regarding a process that aims in the end at the disarmament of the PKK; it is, at least, a fair enough approach to stay away from such frivolousness as “they are killing time by over occupying themselves with questions of what percentage of the PKK have moved out of the borders, 15 percent or 50 or 85, and delaying democratization by hooking it to such questions”.

Or, strangely, in order to use their obsession with Erdoğan to explain away every issue on the agenda, they keep analyzing the process without going beyond reading intentions. The only actor they focus and invest on while doing so is none other than the PKK line. In this case, they fizzle out in terms of developments and analyses every time, because they place their confidence in only one side of the solution process.

THE OUTCOME OF THE SOLUTION PROCESS

If a solution process is to be materialized, – other than the external and secondary factors-, the issue has roughly three main actors: The political willpower that launched the process, the PKK, and last but not the least, the entire nation who need to digest the consequences of this process. If one of these actors is missing or fails to play his role deservedly, existentialist problems may occur in every scenario. The political willpower, among these three actors, is not only responsible for playing a role but also for preparing the society. The other actor, the PKK, should help maintain the process rationally and keep it from any type of instigations. So far, the performance of the political willpower on both points is not bad.

Similarly, a big segment of the society is gradually increasing its support of the process for the reason that the bloodshed has stopped for months and that the political power declared its commitment to it. After a period where the Kurdish issue had been the top agenda item for the last 30 years, the PKK actors now project an image of being the most confused party. The PKK-BDP leadership, as they recover from the shock induced by Öcalan’s message on the day of Nowruz, are gett