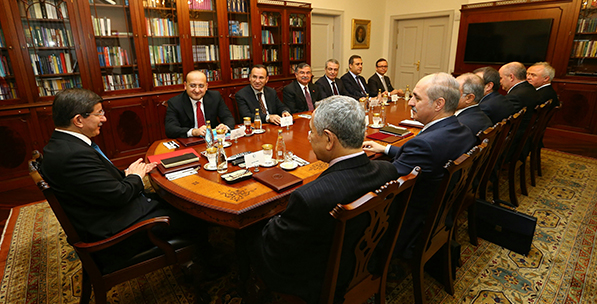 Recently translated into Turkish, “Talking to Terrorists” by Jonathan Powell is highly talked about recently. Although a reference made to the book through the Reconciliation Process of the Kurdish issue is understandable, the book occupies the agenda in Turkey because: 1) The parties have made a progress in the process and come one inch closer to the negotiation phase; 2) The Chief of National Intelligence Hakan Fidan resigned to run for membership in the parliament in the general elections (scheduled for June 7, 2015) but withdrew his resignation and returned to the office; and 3) Discussions about all these instances are unleashed. The author of the book, Powell, was the senior adviser to Prime Minister of the period, Tony Blair, just as Fidan is close to Erdoğan, Powell was to Blair. Powell maintained his position for a decade and was involved in the talks to end the Northern Ireland problem in Britain.

A journalist from Turkey who wrote the preface to Powell’s book and who has bitterly criticized the government’s attitude in the Reconciliation Process, although the government has successfully carried the process to the negotiations phase, says that the referred book should be regarded as “a guide, or a handbook, to settle the Kurdish issue”. Powell, however, has a different stance from the journalist who penned down the preface of Talking to Terrorists and from the circles who have negatively criticized the solution process. Powell does not share their views about the Reconciliation Process of Turkey. In his interview to Turkish media, Powell repeatedly underlined the fact that experiences and conflict dynamics in similar processes are unique to every country. The author also stressed that he “definitely believes” that the on-going process in Turkey will be resolved in peaceful ways and that the government so far has done a good job to orchestrate the “critical phases” of the process.

Majority of the circles have claimed that the Reconciliation Process is not on track, and see the government’s insistence to have “a totally national process” as a problem. So, they have criticized the government for not drawing lessons from the similar processes around the world. The same circles have opposed the peace process because they are against the AK Party; therefore, their “short-lived suggestions” have changed according to the government’s position. Previously, they claimed that the Kurdish issue could not be resolved through a security perspective and that the government should meet with the Kurdish Peoples’ Party (PKK) and its variants readily. These groups also suggested that launching talks between the sides should be the initial condition for a democratic solution and that a ceasefire without preconditions should be followed by the negotiation phase.

But they again look unsatisfied when the government has, beyond any expectations, started the talks, prepared a road map, formed a legal frame and procedures regarding the prospective negotiations as part of the Reconciliation Process. This is because the referred groups believe that the way to stop the AK Party goes through the Kurdish politics; therefore, anticipate that the consensus to be reached in the Kurdish politics, as part of the settlement process, will render them miss this “historic opportunity” that they have been waiting for a long time.

Whereas they are aware of the fact that the two most critical factors to score success in settlement processes are “strong leadership” and “sustaining of the same actors” as seen in the examples around the world, to which they give a great deal of importance. However, they willingly and knowingly overlook these factors which are most frequently emphasized and highlighted in Powell’s book specifically and in the examples around the world generally. Thus, they prefer to decontextualize President Recep Tayyip Erdoğan’s view

TANAP: The Silkroad of Energy Underway
Next
Loading...
Loading...
We use cookies to ensure that we give you the best experience on our website. If you continue to use this site we will assume that you are happy with it.Ok