Turkish military has neutralized over 130 terrorists since the start of an operation to wipe PKK terrorists in northern Iraq aiming to ensure border security.

The military has also ensured influence over an area of 20 kilometers inside Iraq’s territory, according to information obtained by Anadolu Agency. 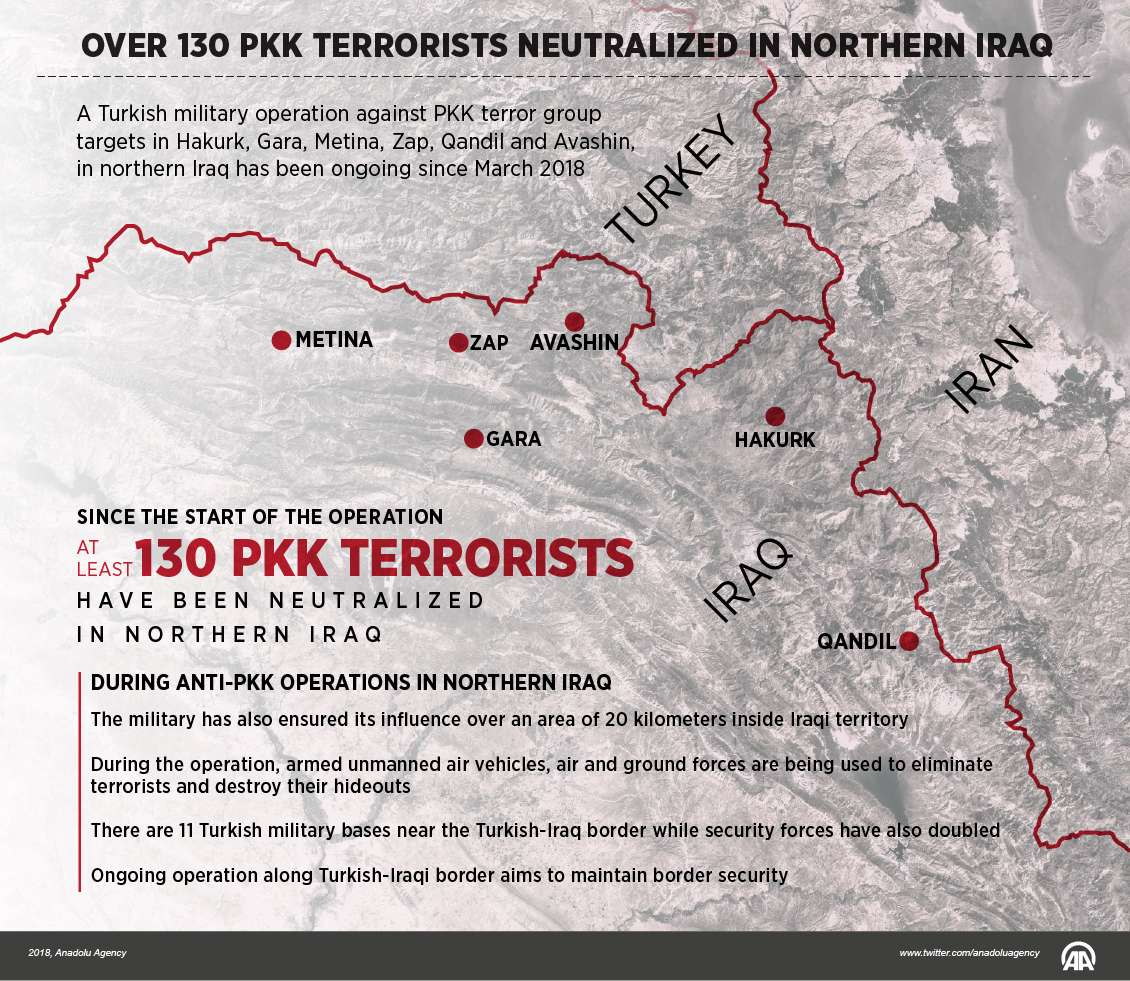 Since March 2018, an operation named after a martyred soldier, Specialist Sergeant Gokhan Kurak, is ongoing in Turkish Iraq borders to maintain border security.

During the operation, armed unmanned air vehicles, air and ground forces are being used to eliminate terrorists and destroy their hideouts.

“It’s clearly visible that the Turkish army is advancing with an aim to destroy shelters of terrorists with its advanced technology and distinguished soldiers,” he added.

Noting that the Turkish military has wiped out terrorists from 250-kilometer strip of the border on the west of Euphrates, Prime Minister Binali Yildirim said that there are 11 Turkish military bases near Turkish-Iraq border.

“Our aim is to eliminate terrorists and ensure our border security before they infiltrate into our territory,” Yildirim said on an iftar (fast-breaking dinner) on June 3, 2018.

The Turkish Interior Minister Suleyman Soylu also said that Qandil is not a faraway target for Turkey anymore.

Airstrikes on PKK targets in northern Iraq, where the terror group has its main base in the Mt. Qandil region, near the Iranian border, have been carried out regularly since July 2015, when the PKK resumed its armed campaign.

Soylu also vowed to maintain peace and security around the border in the near future.

In its more than 30-year terror campaign against Turkey, the PKK — listed as a terrorist organization by Turkey, the U.S. and the EU — has been responsible for the death of some 40,000 people.

Perspective: The Manbij Agreement and Beyond
Previous

What does the Manbij road map mean?
Next
Loading...
Loading...
We use cookies to ensure that we give you the best experience on our website. If you continue to use this site we will assume that you are happy with it.Ok