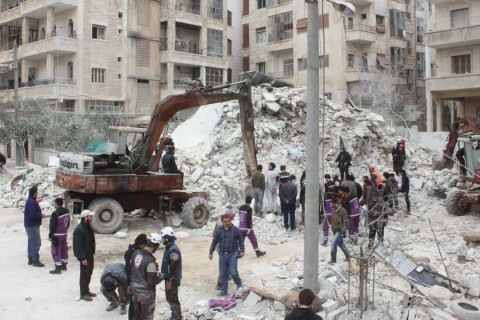 New Opportunities and Challenges for Turkey in Syria

Turkey is determined to follow its Syrian policy for its own goals without choosing Russia over the U.S. or vice versa

In the wake of last week’s U.S. airstrikes against the Shayrat air base, what the Trump administration wants to accomplish in Syria has been a hotly debated issue. Almost overnight, U.S. officials moved from saying that removing Bashar Assad from power was not a priority to claiming that the political transition cannot happen unless Assad leaves. In recent days, Washington has been signaling that it is willing to take additional steps in Syria. Moreover, the U.S. identified Assad’s removal from power and containing Iran as the administration’s priorities. U.S. Ambassador to the United Nations Nikki Haley on Sunday said that Washington had “multiple priorities” – defeat Daesh, remove Assad from power, curb Iran’s regional influence and move toward a political solution. At the same time, policymakers in the U.S. capital have been talking about imposing new sanctions on Russia and Iran over their cooperation with Damascus.

Although Washington’s reputation in the Middle East suffered setbacks due to the Obama administration’s unsuccessful regional policy, it is important to acknowledge that the U.S. remains the most important game-changer in the Syrian civil war. As a matter of fact, it was Washington itself that made it possible for Russia to step in and rescue the Assad regime in 2015. Still, hardly anyone expects the Americans to launch a comprehensive military operation against Assad.

At the same time, it is no secret that removing Assad from power has not been a priority for the U.S. since 2011. Of course, even limited engagement by the Trump administration could significantly strengthen the Free Syrian Army (FSA) and create problems for Russia, Iran and the regime. As Senator John McCain recently pointed out, providing weapons and ammunition, such as Stinger surface-to-air missiles, to the moderate Syrian opposition could mount pressure on the regime forces on the southern and northern fronts. The opposition could clearly charge against the Assad regime in Daraa, Hama and the outskirts of Damascus.

Meanwhile, it would be extremely difficult for the Trump administration to work toward all three goals at the same time. Moving forward, it is safe to assume that the U.S. will experience some moderate tensions with Russia over the regime’s future. Then, Washington will focus on defeating Daesh. An important point here is that Syria could disintegrate unless Assad’s removal and the post-Daesh state of affairs are part of the same plan. At the same time, it would be a serious problem if the Trump administration simultaneously strong-armed the Assad regime into a political transition and continued its support to the Democratic Union Party (PYD)’s armed wing the People’s Protection Units (YPG) militants in northern Syria. If the U.S. takes both steps at the same time, it will place the territorial integrity of Syria and Iraq at risk.

To be clear, it remains unclear whether the Trump administration actually cares about the risk of disintegration. Sebastian Gorka, a deputy assistant to President Trump, once drew a picture of how Libya would be divided into three areas on a napkin in a meeting with a senior European diplomat, The Guardian recently reported.

It is safe to assume that the most recent developments will create new challenges and opportunities for Turkey. When it became clear that the Obama administration had dropped the ball on the Arab Spring and watched the Middle East become entangled in civil wars, the Turks had to develop a roadmap to take care of their own business – which involved fighting terrorist groups like Daesh and the PKK or its Syrian wing the PYD on one hand and to strike a balance between the U.S. and Russia/Iran on the other.

Operation Euphrates Shield and the Astana process both reflected this policy. In the end, the Astana talks ran into problems because the Russians attempted to eliminate the opposition entirely. Moving forward, the Turks will have to try and realize their own goals without choosing between Russia and the U.S. To be clear, Turkey’s decision is much bigger than siding with Vladimir Putin against Trump or vice versa. Right now, Syria is a battlefield too complex and multidimensional for any individual player to consider another stakeholder their ally.

The Constitutional Amendment Draft: The End of Debates on Change in the Turkish Political System?
Next
Loading...
Loading...
We use cookies to ensure that we give you the best experience on our website. If you continue to use this site we will assume that you are happy with it.Ok