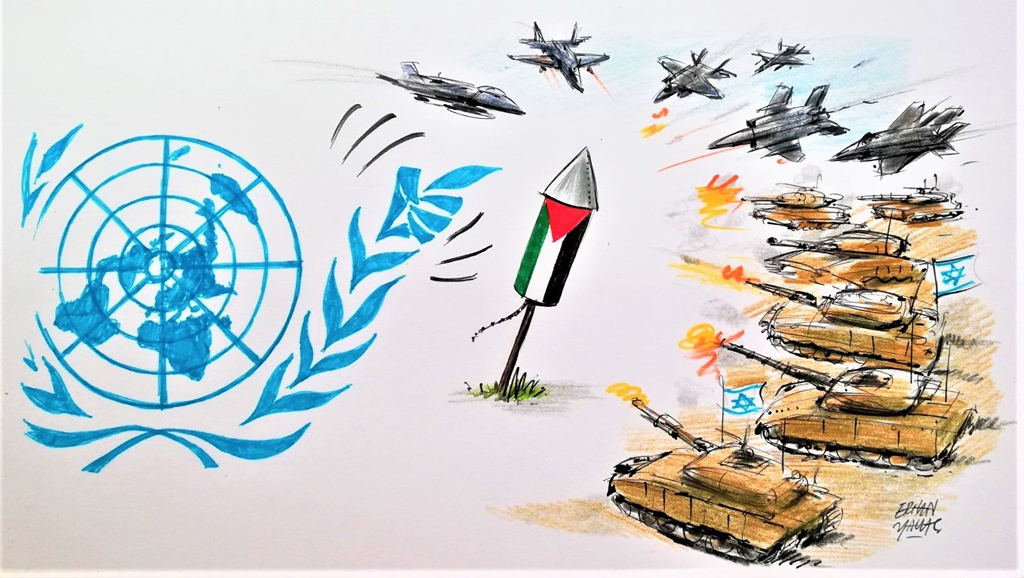 An illustration by Erhan Yalvaç criticizes Israel's asymmetric use of power against the Palestinians and the U.N.'s lack of action in the re-escalated Palestinian-Israeli conflict.

Jerusalem will not be another Andalusia

The Palestinian youth thus, told the entire world that Jerusalem will not be another Andalusia.

The Muslim world celebrated a bittersweet Ramadan Bayram, also known as Eid al-Fitr, as Palestine was covered in blood. At least 174 Palestinians have reportedly died in Israel’s bombardment on Gaza.

Muslim leaders delivered a muted response to Israel’s acts of provocation at Al-Aqsa Mosque. Whereas the Organisation of Islamic Cooperation (OIC) and the Arab League suffer from their traditional helplessness, President Recep Tayyip Erdoğan launched a diplomatic offensive, reaching out to a broad range of countries, from Jordan and Kuwait to Russia and Malaysia.

As such, he attempted to mobilize Muslim leaders, and humanity in general, to take action against those acts of “state terrorism.”

The Biden administration, which pledged to pursue a foreign policy with a focus on “human rights,” by contrast, responded to attacks by Israeli radicals and Israeli forces against Palestinian worshippers at Al-Aqsa Mosque by calling for “restraint” from both sides.

At the United Nations Security Council (UNSC), the United States, once again, used its veto power to defend Israel. Washington also described the firing of rockets from Gaza, a reaction to Israeli aggression, as “unacceptable.”

To add insult to injury, it said that Israel exercised its “right to self-defense” by killing Palestinians in Gaza.

Ironically, Israel’s oppression and complete disregard for the international community even led U.S. and Israeli human rights organizations to describe that country’s current regime as “apartheid.”

The Western media, in turn, overwhelmingly concentrates on “rockets fired by Hamas,” as Russia offered to broker talks between Israel and Palestine – and called for an urgent meeting of the Middle East Quartet.

That proposal was obviously intended as a diplomatic counterattack against the U.S., which, fixated on the Iran nuclear deal, has no room for a peace process between Israel and Palestine on its agenda.

The ongoing massacre in Jerusalem and Gaza could completely undermine the Biden administration’s discourse on human rights. That is why U.S. President Joe Biden is likely to mount pressure on Israel’s Prime Minister Benjamin Netanyahu to calm down, possibly in an attempt to prevent a third intifada.

By contrast, it is no secret that Erdoğan remains immensely popular among Arabs. His most recent diplomatic efforts demonstrated, yet again, that he deserves their appreciation.

Last but not least, the fact that even Russian President Vladimir Putin, who would never do anything to upset Israel, taking the initiative regarding Palestine, highlights the inaction – if not betrayal – of the Arab regimes.

Systematic attacks by the Zionist regime and Israeli extremists on Jerusalem and Al-Aqsa Mosque represent a new stage in the Israeli question.

The Palestinian youth demonstrated that they were fully committed to defending those sacred places. They also showed the world that they would not allow the “de-Palestinization” of Jerusalem or the destruction of the Al-Aqsa Mosque.

This glorious resistance by Palestinian youngsters, themselves citizens of the State of Israel, has been hailed as “the Third Intifada.” It remains highly likely, however, that Tel Aviv will heed Biden’s warning to discourage a new intifada.

The most recent crisis has established that Israel’s chutzpah, which entails a complete disregard for any international organization, will only serve to create a much more difficult future for itself.

It is certainly true that Washington stands with Israel whatever the latter may do. The Trump administration threw its entire weight behind Israel – including the recognition of Jerusalem as that country’s capital.

Today, even the Biden administration, which supports the idea of a “two-state” solution, would not push Israel to accept a peaceful settlement.

In other words, there is no global climate today – nor will there be in the near future – that will compel Israel to stomach a Palestinian state with East Jerusalem as its capital.

The soft belly of Tel Aviv’s seeming might, however, is Israel’s political landscape, increasingly dominated by far-right movements, can no longer keep a lid on the radical Israeli demand of expelling all Palestinians.

The Israeli fanatics, who sang and danced as a tree at Al-Aqsa Mosque was burning, are now the single greatest obstacle before Israel’s access to stability and peace.

Indeed, the “dual cycle of violence,” which could emerge out of Israeli mobs lynching Palestinians, may escalate the situation to frightening new heights.

The conflict between Israelis and Palestinians within Israel’s borders may turn into something entirely different.

For the record, the Palestinians in Israel – not just in Gaza and the West Bank – demonstrated that they would defend Jerusalem and Al-Aqsa Mosque, and even risk their lives to resist “de-Palestinization.”

The Palestinian youth thus, told the entire world that Jerusalem will not be another Andalusia.

Mainstream radicalism in Israel: A long-term threat
Next
Loading...
Loading...
We use cookies to ensure that we give you the best experience on our website. If you continue to use this site we will assume that you are happy with it.Ok