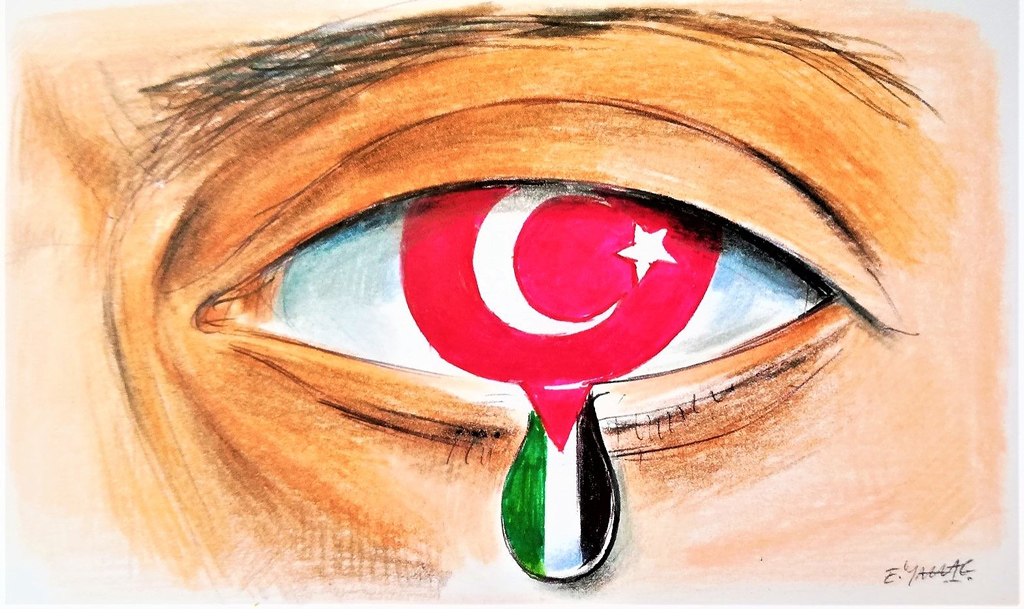 Jerusalem the city of God and ought to remain as such

It is virtually impossible to give up on Jerusalem. In the words of prominent Turkish poet Sezai Karakoç, it is 'the city that was made in heaven and brought down to Earth.' It is 'the city of God and all humanity.' So it ought to remain.

In the final days of Ramadan, Al-Aqsa Mosque has come under attack, yet again, from Israeli occupation forces. Hundreds of Palestinians have been injured in what Turkish President Recep Tayyip Erdoğan described as “acts of state terrorism.”

Tensions, which bubbled up following the decision to forcibly evict certain Palestinian families from their homes in East Jerusalem’s Sheikh Jarrah neighborhood on May 2, exploded on May 7, as the Israeli police assaulted the congregation during the night prayer. On May 10, Israeli fanatics joined the security forces on the occasion of “Jerusalem Day.”

At the heart of the issue is an attempt to “steal Palestinian homes” – as a Jewish settler, seen in a video that has since gone viral, clearly said. Israel wants to “de-Palestinize” the Sheikh Jarrah neighborhood, which was named after Saladin’s physician, and the rest of East Jerusalem.

For the record, this development is not unprecedented. Israel has pursued a systematic policy to “de-Palestinize” East Jerusalem since 1967. Its excuse is to settle so-called legal disputes over property between private persons. The supposed return of Jews to their “properties” began in 1972 and increased from 1991 on.

To add insult to injury, Israeli courts have no jurisdiction over the residents of East Jerusalem, an occupied territory, under international law.

The exile of 38 Palestinian families in Sheikh Jarrah, based on so-called court rulings, is the latest product of Israel’s policy of the “Zionization” of Jerusalem. Zionization is an attempt to erase the thousands of years of peaceful coexistence between various peoples and religions in the region. It is intended to ensure that Jews are the only tribe that live in Jerusalem.

Israel’s policy of expansionism repeatedly targets Al-Aqsa Mosque, the apple of the Muslim world’s eye. One of the earliest attacks in 1969, in which an Austrian Zionist set fire to the mosque, gave rise to the foundation of the Organisation of Islamic Cooperation (OIC), which is now unfortunately fragmented and largely ineffective.

Those who have been resisting Israel’s cruel security forces, as such, have opposed a storming of Al-Aqsa Mosque by Zionists. Palestinian women and men, who have stood guard at the mosque, stand against the Zionization of Jerusalem. They put up epic resistance and refuse to abandon their homes. Once again, this Ramadan, they are risking life and limb to defend Al-Aqsa Mosque.

Unfortunately, there is no other force to push back against Tel Aviv’s expansionism. Israel completely disregards United Nations resolutions, and the Arab regimes have made it clear that they have abandoned the Palestinian and Jerusalem cause.

Expressions of “deep concern” from Western governments will have zero impact on Israeli expansionism. The current occupation, after all, continues with their support. Nor is it possible to expect the OIC or the Arab League to act, since Muslim nations are fragmented and toothless.

The force of resistance in Al-Aqsa Mosque and Jerusalem must be kept alive until a new global/regional order emerges to force Israel to backtrack. Erdoğan’s calls, as the most popular leader in the Muslim and Arab world, contribute to the preservation of that spirit.

It is virtually impossible to give up on Jerusalem. In the words of prominent Turkish poet Sezai Karakoç, it is “the city that was made in heaven and brought down to Earth.” It is “the city of God and all humanity.” So it ought to remain.

Who can normalize with whom in the Middle East?
Previous

State terrorism requires more action than condemnation
Next
Loading...
Loading...
We use cookies to ensure that we give you the best experience on our website. If you continue to use this site we will assume that you are happy with it.Ok