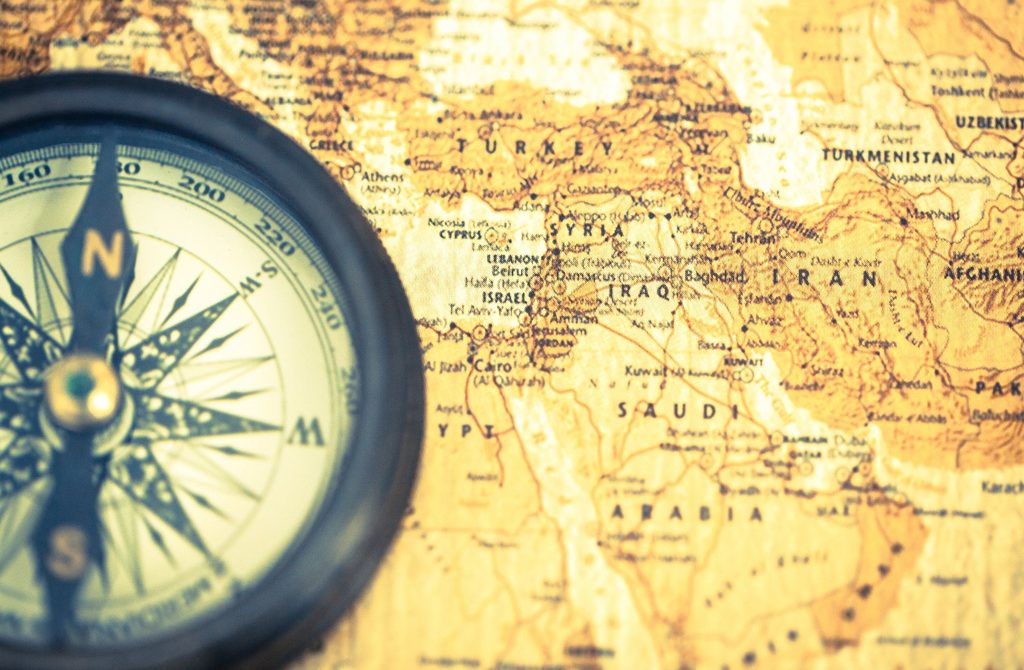 In this illustration photo, an old compass is seen on a vintage world map showing Middle Eastern geography. (Photo by Shutterstock)

Who can normalize with whom in the Middle East?

A wind of normalization is blowing through the Middle East. It all started with the Gulf states ending their blockade of Qatar. The trend continued with the United States moving to reinstate the 2015 nuclear deal with Iran. The fourth round of talks continues in Vienna, in a notably positive atmosphere, as experts note that it would not be surprising for mutual concessions to lead to an agreement.

A wind of normalization is blowing through the Middle East. It all started with the Gulf states ending their blockade of Qatar. The trend continued with the United States moving to reinstate the 2015 nuclear deal with Iran. The fourth round of talks continues in Vienna, in a notably positive atmosphere, as experts note that it would not be surprising for mutual concessions to lead to an agreement.

At the same time, Turkey and Egypt attempted to repair their relations with an eye on the Eastern Mediterranean and Libya. The Turkish delegation announced, upon returning from Cairo, that they engaged in comprehensive and frank discussions. President Recep Tayyip Erdoğan added that the process will be “broadened,” recalling historic ties between the Turkish and Egyptian people.

It is no secret that normalization with Cairo is compatible with the mutually desired fresh start between Ankara and Abu Dhabi. Again, following Erdoğan’s phone call with King Salman of Saudi Arabia, Turkish Foreign Minister Mevlüt Çavuşoğlu is scheduled to visit Riyadh tomorrow.

Meanwhile, Saudi Crown Prince Mohammed bin Salman (MBS) expressed a desire to build “distinguished” relations with Iran – which Tehran welcomed. Iran’s former president, Mahmoud Ahmadinejad, was the latest politician to comment on those developments. He argued that Iran, Turkey and Saudi Arabia could reshape the region if they were to act in unison. Ahmadinejad added that the common interests between those three countries unmistakably outweighed their disagreements.

His proposal reminded me of a particularly popular argument after the Arab revolts: “Regional powers can prevent interventions by outsiders by establishing an order in the Middle East through cooperation.” We witnessed how that opportunity was squandered due to the Gulf’s crackdown on the Arab peoples’ democratic demands and polarization between Iran, on one side, and Saudi Arabia and the United Arab Emirates (UAE) on the other.

Tehran is responsible for chaos and war in Syria, Iraq and Yemen, where it used Shiite militias. Of course, Ahmadinejad does not directly call for regional powers to create a new order. Yet the essence of that idea is that Iran, Saudi Arabia and Turkey should join forces – or a version of that notion that excludes Israel.

First, normalization and closer cooperation between those three governments would severely disturb Tel Aviv. Israel, which made significant progress toward normalization with Arab states thanks to the Abraham Accords, will do anything to stop the Gulf from moving closer to Iran. After all, it assesses that Iran will become a nuclear power by 2030 – which it sees as a nightmare scenario.

Secondly, it is extremely difficult for Tehran to reassure other regional powers. Everyone already assumes that Iran will exploit the opportunities that normalization with Washington will entail.

Last but not least, managing the influence and interests of outside powers is a critical challenge. Neither the United States, which is retreating from the region, nor Russia and China, which intend to play a more active role, would welcome unity between those three capitals.

As such, Ahmadinejad actually attempts to stop normalization between Tehran and Washington from encouraging the remaining regional powers to cooperate more closely. If the secret talks between Riyadh and Tehran yield no serious results, it is possible that Saudi Arabia could pursue deeper engagement with Ankara and Tel Aviv.

Surely enough, it is good news that regional powers in the Middle East have grown tired of fierce competition, which has been around for a decade since the Arab revolts, and that they intend to repair their relations.

Right now, all parties carefully monitor each other’s moves. Riyadh, consumed by the war in Yemen, wants to focus on its Vision 2030. Tehran seeks to translate normalization with Washington into economic welfare at home. It also fears the birth of a new anti-Iran bloc.

Meanwhile, Ankara seeks to cement what it gained over the last five years by pursuing normalization. Finally, Tel Aviv wants to protect its gains from the past decade and remains concerned about the possibility that Iran will become stronger.

For the record, there is no reason to expect this wave of normalization, blowing in the Middle East, to bring about regional cooperation swiftly. Both the competition between conflicting interests and interventions by outside powers will stick around. The current state of affairs may prove much more resilient than it seems.

Jerusalem the city of God and ought to remain as such
Next
Loading...
Loading...
We use cookies to ensure that we give you the best experience on our website. If you continue to use this site we will assume that you are happy with it.Ok