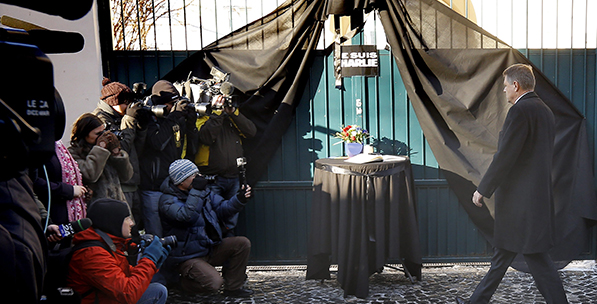 From Sultanahmet to Paris

What we desperately need at this point are inclusive policies to curb the influence of radical interpretations of religion.

Despite its countless ghettoes, our world runs on mutual dependence. Risk societies, woven together by global networks, are haunted by a steady flow of problems including poverty, crises and terror – which have traditionally proven more transferable than peace and values.

Over the past week, terrorism took the form of a suicide bombing in Istanbul’s Sultanahmet district and the massacre of 12 people in Paris, France. CCTV footage indicates that professionally trained assailants – three French citizens with ties to ISIS – perpetrated the terror attack against Charlie Hebdo, a French satirical magazine.

For a long time, European authorities had voiced concern about foreign fighters among ISIS ranks returning to their home countries and engaging in terrorist acts. Unfortunately, fear became reality as terrorists targeted Charlie Hebdo, which, by publishing drawings of Prophet Muhammad, had been criticized by the French Muslim community since 2006. The entire world protested this terrorist attack – dubbed the 9/11 of France. Obviously, the statements against terrorism were rejoicing. In response to the attack, presidents François Hollande and Recep Tayyip Erdoğan condemned terrorism and joined together in their responsible attitude. We must, nonetheless, be realistic: There is a good chance that this deplorable act will soon be seen as a barbaric/Islamist attack against Western civilization’s common values. Similarly, observers might soon reach conclusions akin to the “clash of civilizations” position after 9/11. Keeping in mind that radical right-wing organizations have been on the rise in Europe and have begun to influence mainstream politics, there is fertile ground for such animosity. As PEGIDA and other movements suggest, xenophobia could potentially evolve into Islamophobia soon.

At this point, those condemning the Paris massacre have to concentrate on the underlying reasons for such acts of terrorism. First and foremost, I must point out the following: Middle Eastern societies find themselves trapped in a vicious cycle of civil war, radicalization and sectarian tendencies. There is no doubt that Muslims will have to overcome these challenges on the basis of participation, pluralism, co-existence and liberty. Furthermore, the prominence of radical organizations in terms of the Muslim community’s representation and Western responses represent perhaps the most problematic aspect of the problem at hand. At the same time, it remains questionable whether Muslims can face their problems amidst such intense fighting.

Asking moderate Muslims to speak up hardly helps. Let us remember that several hundred million people have lost their lives due to occupation and war in the Middle East over the past decade while millions lost their homes. It is, similarly, important to consider that the United States and various European governments bear some responsibility with regard to the ongoing crisis. We all have a responsibility toward others, but the West undoubtedly has a greater responsibility than others. Today, the international order remains highly Western-centric – which means that Europe has a responsibility to help resolve existing problems and therefore does not enjoy the luxury of turning its back on the world.

Moreover, authoritarian regimes across the Middle East represent an equally great challenge for Europe as radical organizations and the future of foreign fighters. Considering that the continent is home to over 15 million Muslims, the Islamic world’s problems represent a domestic matter for Europe. As a matter of fact, Muslim residents of Europe make valuable contributions to the continent’s diversity. This is not a process of Islamization but an opportunity to co-exist with the Islamic faith. Of course, the Muslim community must be associated with interaction and sharing as opposed to terror. In order to achieve this goal, European Muslims will need some common sense from the continent’s elites and societies. In fact, addressing issues related to the Muslim community w

The Massacre in Paris and How To Prevent Another One
Previous