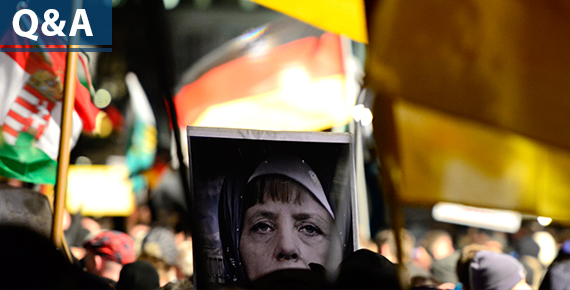 Q & A: The PEGIDA Movement, The Changing Face of German Fascism

PEGIDA (Patriotic Europeans Against the Islamization of the West, or Patriotische Europäer gegen die Islamisierung des Abendlandes, in German) finds a cover for rightist extremist racism in Germany and reaches out to masses through this cover.

1. What are the dynamics of PEGIDA shaping around anti-Islam and anti-immigrant protests?

We face a new movement organizing protests with anti-Islam banners and slogans. This is an entity that calls itself “Patriotic Europeans against the Islamization of the West (PEGIDA)”. It is gradually gaining strength and reaching out to wider circles. PEGIDA, which can be described as an anti-Islamic movement, claims “We oppose the Islamization of the West not Islam.” PEGIDA states on its Facebook page that they are against hatemongers and religious or political radicalism regardless of their religion. In the frame of “the right to protect the Western culture dominated by Judeo-Christianism”, the movement claims to stroll against the parallel society structure formed by immigrant communities who do not integrate with host countries but rather preserve their own cultural norms. In this context, demonstrators carry banners at the rallies reading “We miss our own Germany”, “Stop immigrants to benefit from our social prosperity”. On October 27, 2014, only 500 people participated in the protests, but the figure jumped to 17,500 on PEGIDA’s December 22, 2014 demonstration. Immigrants living in Germany are concerned about the increasing numbers of protesters, which presents itself as a quite new phenomenon that requires an explanation by social scientists.

2. Can we read this as the footsteps of fascism re-emerging in Germany?

Although PEGIDA supporters insist that neo-Nazis do not participate in demonstrations held against foreigners and the spread of Islam, it is signified that there were scores of extreme rightist Neo-Nazis among the protestors chanting “We are the people”. The term “volk”, (people) in German, used by the Neo-Nazis represents unity of racism and a collective mission. So, during PEGIDA protests, concepts such as “people” and “motherland” were re-visited. However, it is early to state whether the PEGIDA movement is changing direction towards fascism, although some aspects of the movement may be connected to fascism. We may rather say that it is the reactivation of existing fascism but not neo-fascism. This is because stagnant racist movements, in time, gain momentum and naturally transform into fascism. In this regard, the PEGIDA movement as well, finds a cover for the extreme rightist discourse in Germany, and is reaching out to masses through this cover.

3. Are these developments taking place because the Islamophobia threat in Europe is not taken seriously enough?

In a similar fashion to how Jews were held responsible for many crises and problems and were made scapegoats during the Neo-Nazi period, Muslims are seen as the reason behind problems today; and the commonsense of German society is being targeted through anti- propagandas opposing Islamization. The already bankrupted multi-culturalism policies previously declared by Chancellor Angela Merkel, and immigrants, Muslims in particular, are made scapegoats for the economic crises. Exclusion policies are generated out of fear that Muslim population in Europe may reach 50 percent of the total population by 2050. People who are not satisfied with economic, social and political status quo, put the focus on immigrants, Islam and Muslims, as political parties fail to find a solution to public’s dissatisfaction. Consequently, PEGIDA-like movements come into picture. The assertion is that PEGIDA plays a critical role in recent escalation of attacks against mosques, immigrants, and ethnic-backgrounds. Following the murders committed by [a far right German terrorist group] National Socialist Underground (NSU) in particular, Islamophobia has been underestimated in Germany. Racism has been institutionalized through the NSU. German political parties have remained incapable of fighting against Islamophobia.

4. How do you evaluate the attitudes of German politicians on the matter?

From Sultanahmet to Paris
Previous

Oil Price Plunge: Conspiracy or Market Failure
Next
Loading...
Loading...
We use cookies to ensure that we give you the best experience on our website. If you continue to use this site we will assume that you are happy with it.Ok