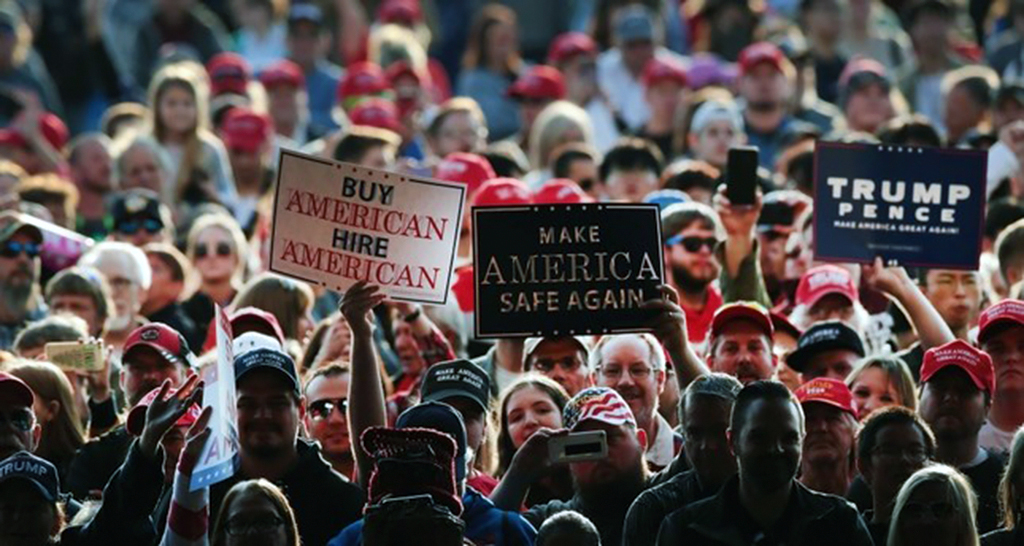 Supporters await the arrival of President Donald Trump at a rally for the upcoming midterm elections, at the Southern Illinois Airport, Murphysboro, Illinois, Oct. 27.

Campaign process driving polarization in US

The polarized atmosphere in the U.S. keeps increasing as midterm elections approach, offering an alarming picture of the deep divisions in American society

The U.S. is bracing for a crucial midterm election next week. The candidates, political parties and president have all been pushing forward with some serious campaigning over the last couple of weeks. For the current administration, it will be important to keep Congress on its side while entering a critical period. While on the other hand, it will be critical for the Democrats to end the Republican dominance in both houses of the Congress.

Early polls projected that in the Senate, the Republicans will keep their majority and may even increase it with a few seats; whereas the same polls predicted that, in the house elections, they might lose their majority to Democrats. But, of course, we should keep in mind the total failure of these public opinion polls during the 2016 presidential elections.

Since the voter turnout in midterm elections is around 40 percent on average, these polls may, in fact, fail to project the results, if one of the parties can increase the mobilization of their electorate ahead of the polls. The latest Pew research on the midterm elections showed that the enthusiasm to vote among the American electorate is the highest in the last 20 years and particularly high among the Democrats.

Compared to the previous election, the Democrats seem to be more enthusiastic to go and vote this time around. The expectation of a high voter turnout also demonstrated itself in the midterm primaries. The same research shows a surge in voter turnout for the primaries, particularly among the Democrats. Especially due to the current debates on gender issues and the controversy during the appointment of Judge Brett Kavanaugh. There is an expectation in the mobilization of women voters in this election. The number of female candidates has also increased.

Many observers of American politics argued that this will be one of the most critical elections in U.S. history. It is not like this description has not been used for other elections before but those who used it had some important explanations for it.

Although political polarization has stirred debate for years, it has reached a new height recently. Today some even call the present phenomenon political tribalism. The discourse and rhetoric in U.S. politics have become extremely divisive and the words that would usually be considered offensive, unacceptable or inappropriate, have become part of the mainstream discourse.

The hate messages in political rallies and on social media all reflect a rather divided society. Because of this situation, politics has become the most useful currency for some candidates. Even before the elections, people started to talk about the potential consequences of this divisive campaign. This divisive atmosphere has also influenced the debate on some critical issues like immigration and gender.

It is obvious that politics will be different, policy and campaign rhetoric is usually different from adopted policies, however, the divide between them has become murky over the last few years. It will be taken more seriously after the recent incidents of violence.

U.S. citizens, in recent polls, have expressed that the economy continues to be one of the most significant issues in the elections, followed by health care. The debates about the pre-existing condition have shaped and transformed the positions of some politicians in the country.

In this extremely divisive and polarizing atmosphere, the mobilization of voters will determine the outcomes. However, the campaign process, even if it will remain as politics, has already hurt the American nation.

Fear and loathing in the Middle East
Next
Loading...
Loading...
We use cookies to ensure that we give you the best experience on our website. If you continue to use this site we will assume that you are happy with it.Ok