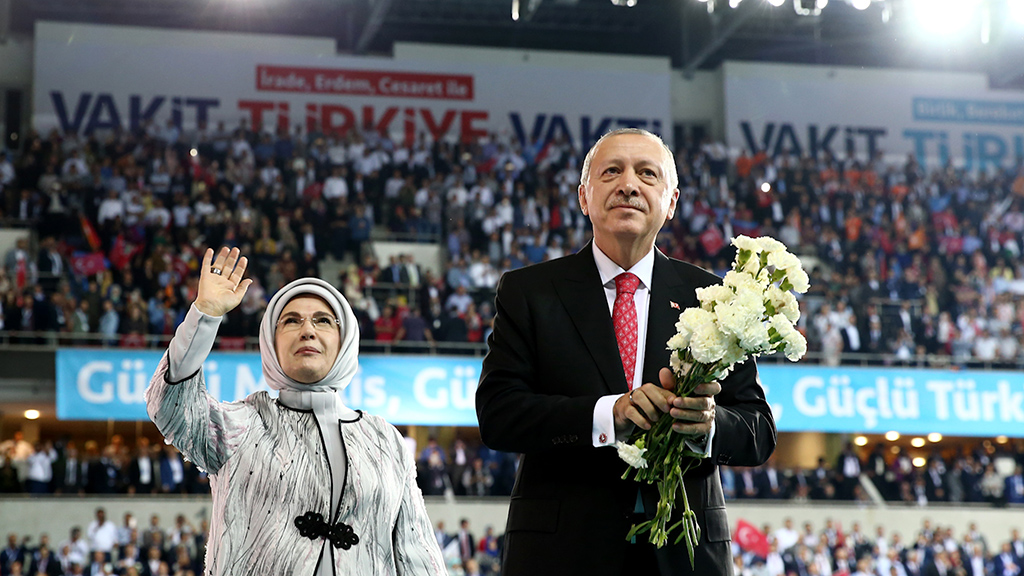 Apparent reasons behind Erdoğan’s victory in the elections

The Turkish people chose Recep Tayyip Erdoğan as the first president of the new presidential system in their country on June 24, making him win his 13th race for elections since 2002.

The Turkish people chose Recep Tayyip Erdoğan as the first president of the new presidential system in their country on June 24, making him win his 13th race for elections since 2002. The turnout reached a record-breaking level of 87.5 percent. Erdoğan got 52.6 percent of votes, while his closest rival Muharrem İnce got 30.6 percent.

In his balcony speech following the elections day, Erdoğan expressed the importance of conciliation, unity and more services. While the Republican People’s Party’s (CHP) candidate İnce said the now-trending words “the man [Erdoğan] did it” in a message to a journalist, and later declared in a press conference that he accepts the election results, respects the will of Turkish people and congratulated Erdoğan.

For the parliamentary elections, the majority of the electorate voted for Erdoğan’s Justice and Development Party (AK Party), gaining 295 lawmakers with 42.6 percent of the vote, while its People’s Alliance partner, the Nationalist Movement Party (MHP), got 11.1 percent of vote, making the alliance the winner of the elections with 53.7 percent in total. The Nation’s Alliance formed by the CHP, the Good Party (İP) and the Felicity Party (SP) received 33.9 percent in total consisting of the CHP’s 22.6 percent, the İP’s 10 percent and the SP’s 1.3 percent.

The Peoples’ Democratic Party (HDP) received 11.6 percent of the vote, gaining 65 seats in Parliament. The HDP, not included in any alliance, lost some of its votes compared to the previous elections from the predominantly Kurdish regions of southeastern and eastern Turkey, while it increased its votes from the western parts of the country.

The results proved true some rumors during the campaign period that some CHP bases in the western provinces would support the HDP to get it to pass the threshold to be in Parliament. For instance, Özgür Özel, a senior CHP lawmaker, had said before the elections that if İnce is elected, one of the vice presidents may be Selahattin Demirtaş, the imprisoned former HDP co-chair, while HDP deputy Ayhan Bilgen stated that they would support İnce against Erdoğan in a possible second round.

In the end, the fact that all parties of both alliances and also the HDP will be represented in Parliament is a very good development for Turkish democracy.

Despite the opposition’s arguments, there are many factors behind Erdoğan’s victory in the June 24 elections. It is worth mentioning them.

Firstly, Erdoğan’s resistance of the Gülenist Terror Group’s (FETÖ) heinous coup attempt on the night of July 15, 2016 was greatly admired by the Turkish people. According to them, by doing this Erdoğan acted as a real statesmen. Sure about his bravery and leadership, it is fair to say that majority of the people did not hesitate to vote for Erdoğan in the elections.

Secondly, the past and future projects and services to be provided by the AK Party under the leadership of Erdoğan played a determinant role in his victory. Known for his decisiveness in keeping his word about projects and plans, Erdoğan was supported in the presidential elections. His vote rates in Istanbul and Ankara where the megaprojects came true were very high. The nuclear power plant, Kanal Istanbul, the national automobile, helicopter and airplane carrier and the giant National Park are just few of the said projects. Erdoğan’s encouragement and support of manufacturing a national drone and armed drones and the new-generation unmanned combat aircraft while dealing with Russia for the purchase of S-400s and receiving F-35 jets from the U.S. were also other reasons behind the victory.

Thirdly, was the policies and actions in the fight against countrywide terrorism. The Turkish people believe that Erdoğan will for certain continue fighting against both FETÖ members and the PKK and its affiliated groups and any other terrorist groups. Turkey has been under attack through a major regional plan near its border. The PKK’s Syrian affiliated groups, the People’s Protection Units (YPG) and the Democratic Union Party (PYD), are currently doing their best to form a terror corridor along Turkey’s border, while another bloody terrorist group, Daesh, poses a huge threat to the security and safety of Turkey.

Turkey has also been under attack by PKK elements in the Qandil mountains in northern Iraq for years. The Turkish people know that Erdoğan, who carried out domestic and cross-border counterterrorism operations, is currently the only leader that has the courage and ability to fight against these terrorist groups until they are eliminated. Thus, the voters wanted to continue and even increase their state’s anti-terror struggle and voted for Erdoğan.

Fourthly, the unity of the People’s Alliance affected voter behavior. The right, conservative and religious people could unite and support a leader for the first time after a longbreak. People are still pleased with such a great unity and wanted to support the alliance.

Lastly, Erdoğan’s efforts as well as his tangible and rational promises during his campaign were obviously appreciated, not only by his supporters, but also the swing voters.

Therefore, it is safe to say that Turkey experienced an elections period very beneficial to its democratic culture. Despite some minor incidents and manipulation, particularly on social media, Turkish democracy has now become stronger than ever with mutual common sense in society.

This is an opportunity for a better future for Turkey and its people. As a result, people chose the People’s Alliance of the AK Party, the MHP and the Great Union Party (BBP) and paved the way for a fresh start with a new governing system. However, this is not only a victory for Erdoğan, the AK Party or the alliance but for the whole nation and Turkish democracy.

Is the fight against FETÖ complete?
Next
Loading...
Loading...
We use cookies to ensure that we give you the best experience on our website. If you continue to use this site we will assume that you are happy with it.Ok