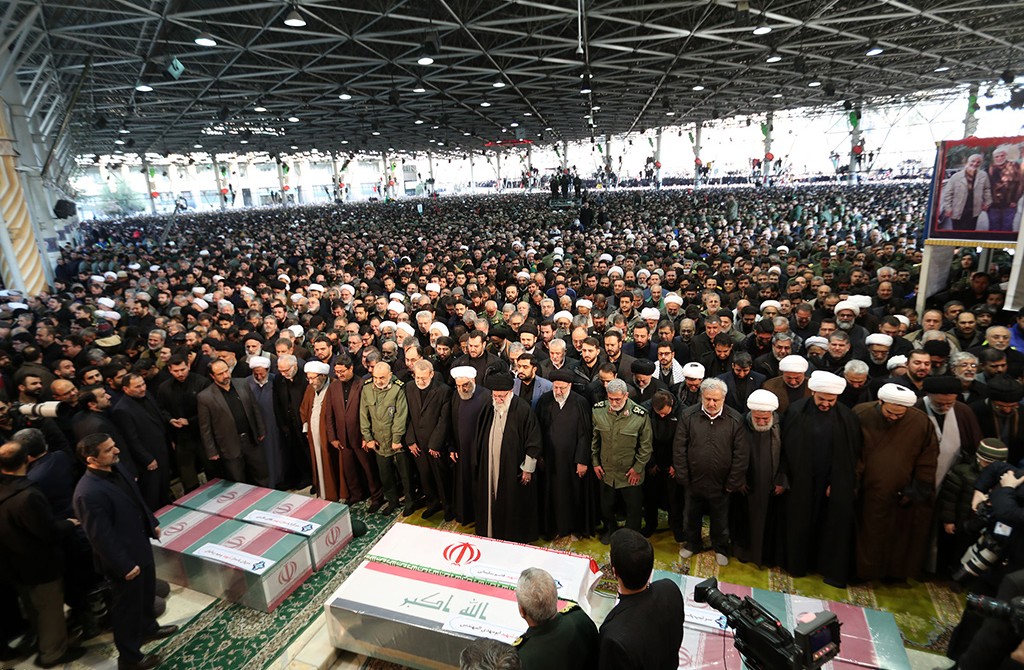 6 January, 2020 | Thousands of Iranians attended a funeral procession for top military general Qasem Soleimani and Iraqi militia leader Abu-Mahdi al-Muhandis in the capital Tehran on Monday. Soleimani, the head of Iran's Revolutionary Guards' elite Quds force, and al-Muhandis, the deputy leader of the Iraqi Hashd al-Shaabi force, were killed in a U.S. drone airstrike outside Baghdad airport on Friday. Iran's Supreme Leader Ali Khamenei led the prayer for the two men at the University of Tehran, according to the official IRNA news agency. Thousands of mourners chanted "Death to America" and "Death to Israel" as they carried banners demanding revenge for Soleimani. The corpses of Soleimani and al-Muhandis arrived in Tehran Monday dawn along with the bodies of four other people killed in the U.S. airstrike. On Saturday, thousands of mourners gathered in several Iraqi cities for a funeral procession for the two men. Soleimani's killing marked a dramatic escalation in tensions between the U.S. and Iran, which have often been at a fever pitch since President Donald Trump chose in 2018 to unilaterally withdraw Washington from a nuclear pact world powers struck with Tehran. Iran's top security body has vowed "harsh retaliation" at the "right time and right place" to the general's killing. The Pentagon accused Soleimani of plotting an attack on the U.S. Embassy compound in Baghdad, and planning to carry out additional attacks on U.S. diplomats and service members in Iraq and the region. (AA)

With Soleimani dead and Iran vowing revenge, what’s next?

Since the killing of Qassem Soleimani in Baghdad last week, there have been debates, questions and concerns about the potential implications of this attack on U.S. foreign policy and the international relations of the Middle East in general. The missile attacks of Iran on a base in Iraq and the debates about a Ukrainian airlines plane presumably shot down by a missile increased the level these discussions.

Since the killing of Qassem Soleimani in Baghdad last week, there have been debates, questions and concerns about the potential implications of this attack on U.S. foreign policy and the international relations of the Middle East in general. The missile attacks of Iran on a base in Iraq and the debates about a Ukrainian airlines plane presumably shot down by a missile increased the level these discussions.

Although the remarks of U.S. President Donald Trump and the statement of U.S. officials about their readiness to negotiate with Iran at this point seem to have lowered the tension in the past few days, there are still too many concerns in regard to unpredictability and uncertainty about the situation. Three main issues need to be observed in the coming days about the potential outcomes of the Soleimani attack.

First of all, what is next for U.S. foreign policy? Following the attack and the sending of more troops to the Middle East, there are questions about U.S. policy in the region.

While President Trump’s motto from the very beginning has been ending “long and endless wars” in the Middle East, the potential escalation in Iran risks another of these conflicts, this time more directly with Iran, in the Middle East.

Such escalation not only leads to an operational or tactical challenge for the U.S. but could also be a strategic impediment to its policy shifts toward the Asia Pacific. In fact, instead of focusing on the rise of China and its potential threats to U.S. military and economic might, such a change in the focus can generate another source of diversion for the U.S. strategic perspective.

Second, there will always be a question in regard to an “exit strategy” for such an escalation in the Middle East. This has been a frequently mentioned problem in U.S. military interventions in the Middle East in the last two decades. The statement about the readiness to negotiate with Iran at this point does not sound like a very viable exit strategy at this point given the difficulty of having a diplomatic channel before de-escalation and the public reaction in Iran toward the U.S.

Likewise, the attack and its aftermath have raised another issue in regard to Iran’s destabilizing capabilities in the Middle East. In the aftermath of the attack, the main debate has revolved around possible further Iranian retaliation.

Specifically, Iran’s declarations of vengeance may develop into potential scenarios for Iranian attacks on American targets. The scenarios include potential direct or sponsored cyber/missile/terrorist attacks by Iran on U.S. bases, U.S. allies and even U.S. cities. Some have projected further destabilization in the Middle East and deterioration of the situation in some of the civil wars in the region, including Syria and Yemen.

The repertoire of these potential attacks demonstrated that there is something inherently wrong. Many now one more time assert that no country should make the region this vulnerable to other countries.

Finally, the statements in the aftermath of the Soleimani attack once again demonstrated the problem of planning and implementing foreign policy in the U.S.

Most of these statements raised more questions and concerns about U.S. foreign policy decisionmaking. The “cultural sites” tweet of President Trump and the 9/11 tweet of Vice President Mike Pence generated great debate whereas the discussions between some members of Congress and officials of the U.S. administration raise question marks about the rationale behind the attacks.

These contradictory statements and confusing explanations of the attack have become new examples of the poor handling of a foreign policy crisis for the U.S.

Trump wants to renegotiate with Iran, not engage in a war
Previous