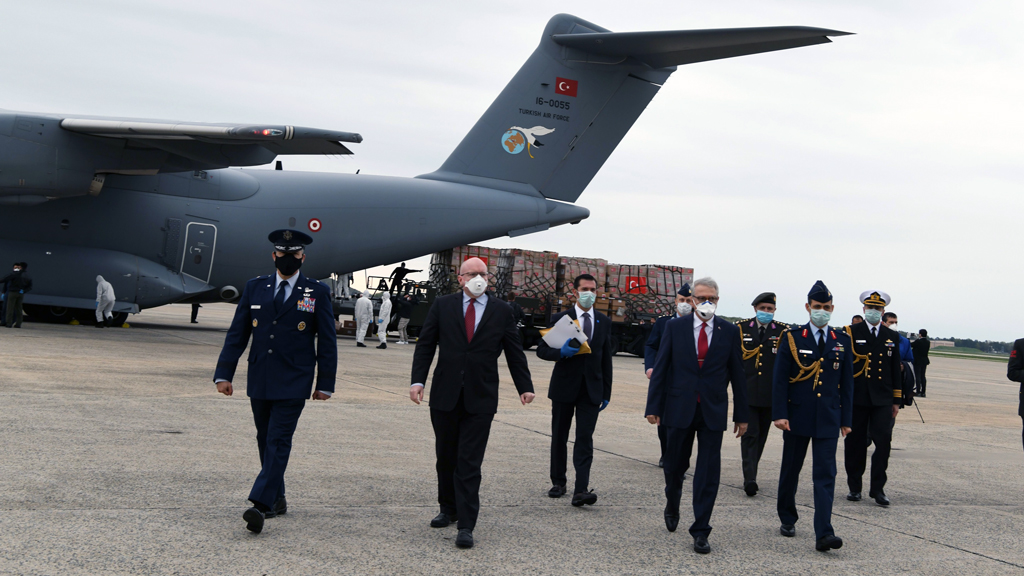 US Secretary of State Mike Pompeo thanked Turkey on Tuesday for sending medical aid to the country amid the novel coronavirus outbreak on Twitter with this taken picture: "During times of crisis, @NATO Allies must stand together. We thank Turkey for their generous donation of medical supplies and protective equipment to help us fight #COVID19 in our hardest hit areas. Americans are grateful for your friendship, partnership and support."

Why does Turkey help other nations?

Since the beginning of the coronavirus crisis a lot of countries and international institutions failed in the test of containing and managing this crisis. Among these, were the most advanced nations, economic powerhouses of the world and the most sophisticated regional organizations.

Since the beginning of the coronavirus crisis a lot of countries and international institutions failed in the test of containing and managing this crisis. Among these, were the most advanced nations, economic powerhouses of the world and the most sophisticated regional organizations. When historians write about the coronavirus pandemic in the future they will explain how the world turned out to be such a different place in such a short period of time. All the optimism about globalization and international connectivity ended in such a short period of time. It is too early to write about the full track record of the countries as we are in the most optimistic scenarios months away from producing an effective way to fight against the virus.

However, we do have some ideas about the countries that failed to take the right measures during the pandemic. Some countries failed due to the poor preparation for the outbreak. Although it was difficult for countries to predict and estimate the pandemic’s extent, it shocked many around the world to see that there was a shortage of masks and ventilators in some of the most developed economies. The lack of investment in public health care over the years impacted the ability of some countries to respond effectively to the pandemic. The cost of the treatment and the difficulty to receive medical attention in these countries contributed to the rapid rise in COVID-19 cases.

The lack of skills and capability of the individual nations was part of the story, but what is more frustrating is the state of international cooperation. In the midst of the greatest international threat we have ever seen, many nations either failed or were very slow to establish effective cooperation and coordination with other nations. Self-help systems and self-dependence have become the rule of the game. For instance, ineffective cooperation was witnessed between two major economic blocs of the world, namely the European Union and the U.S., which has so many economic, social, cultural and political ties since the beginning of the crisis.

Suddenly all previous networks of cooperation and connectivity turned out to be useless to generate some form of solidarity to deal with a common threat. The historical relations, geopolitical camaraderie, business ties and commonalities in the identity of these nations failed to create a team spirit.

Moreover, the cooperation among the nations in regional organizations has also been trivial. The EU has become a major disappointment for the citizens of most of the member countries. In Italy, for instance, people started to burn the flags of the EU in protest against the lack of assistance for other member countries. Brussels finally admitted its mistake, but it is too little too late at this point after thousands of people lost their lives. Finally we have seen that countries like China, which has been regarded as a potential replacement for the U.S. in protecting and promoting a liberal international order failed to act as a country in charge during this crisis. The questions that arose in the last months about China’s transparency during the crisis were not effectively answered.

During times of crisis, @NATO Allies must stand together. We thank Turkey for their generous donation of medical supplies and protective equipment to help us fight #COVID19 in our hardest hit areas. Americans are grateful for your friendship, partnership and support. pic.twitter.com/5ePVaRdMlf

Major countries surprised everyone when they started to suggest conspiracy theories in order to explain the source of the virus or to scapegoat some others. We have seen in previous crises as well that conspiracy theories are the worst things that can be offered in a crisis such as this. In fact, when countries shut their borders in order to slow the spread of the virus, some of them also shut themselves to help people around the world. They treat a pandemic like an approaching hurricane or an expected earthquake that will hit the country for such a short period of time and vanish in its aftermath. Selfishness and self-centeredness took center stage for some countries around the world in the midst of a crisis that hurts everyone. We have seen instances when countries confiscated medical supplies that their companies sold to other countries. Others sent broken and ineffective supplies to other countries.

At this critical juncture, Turkey turned out to be a beacon of hope for international solidarity and cooperation around the world. In less than two months since the confirmation of the first COVID-19 patient in Turkey, the country helped 55 nations around the world by sending them cargo planes full of medical supplies. In the last week only, Turkey allowed the export of ventilator parts to the U.S. and sent medical supplies to Palestine and the U.S.

During this crisis, the country played a leadership role in solidarity and cooperation to deal with this crisis. Puzzled by this level of dedication and commitment to help other countries, many analysts started to question the “underlying factor” behind the Turkish generosity. Interestingly enough, they treat the COVID-19 assistance from Turkey as a standalone attitude of Turkey in the international system. They question motives, rationale and lost precious time while brainstorming about it. However the response was easy to figure out if one looks at Turkey’s pattern of humanitarian assistance over the last several years.

Secondly, since the beginning of the Syria crisis, Turkey has been playing an exemplary role in handling refugees. In fact, according to United Nations High Commissioner for Refugees, “Turkey continues to host the largest number of refugees worldwide, as the number of people forcibly displaced across the world due to conflict, violence and persecution hit record levels. Turkey currently hosts over 3.6 million registered Syrian refugees along with over 365,000 persons of concern from other nationalities.” In addition to the refugees that come to Turkey, the country is also providing assistance for internally displaced persons (IDPs) in Syria.

So when the coronavirus crisis erupted, Turkey reacted just like it has in the last several decades in regard to helping people from different parts of the world, embracing those fleeing from the atrocities of civil wars and failed states and providing humanitarian and developmental assistance to the least developed parts of the world. The continuation of this pattern can be seen in Turkey’s stance during the coronavirus crisis as well.

The attempts to establish diplomatic channels to establish cooperation, to diagnose the countries and regions that need assistance and mobilize its resources to help them sound all too familiar for the Turks. Trying to seek an ulterior motive behind this help would be ignoring the track record of the country. It may be Turkey’s way of approaching a crisis regardless of its origin or its place. It may be a model for those seeking how to generate international cooperation and solidarity in times of global crises.

Analysis: The Possible Geopolitical Implications of the Covid-19 Pandemic
Next
Loading...
Loading...
We use cookies to ensure that we give you the best experience on our website. If you continue to use this site we will assume that you are happy with it.Ok