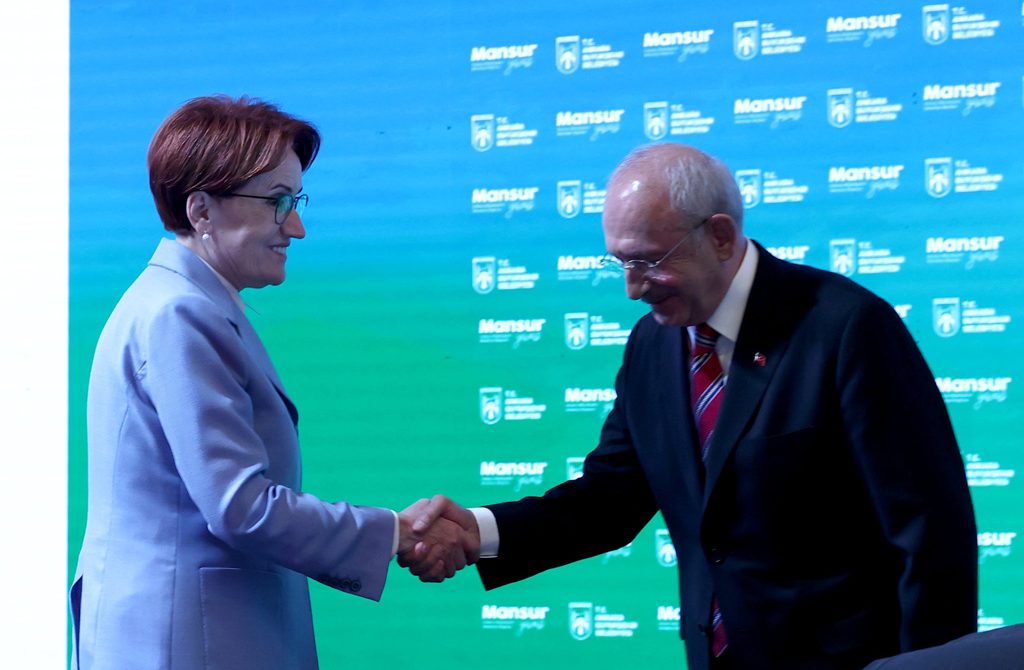 Who are disciplined via the HDP?

In truth, the question at hand goes beyond that. This is about who would make crucial political decisions (and how) if the opposition bloc were to win next year’s elections.

The ongoing debate between the Republican People’s Party (CHP) and the Good Party (İP) over offering Cabinet berths to the Peoples’ Democratic Party (HDP) highlights a complex problem that the “table for six” encounters: They cannot live with or without the HDP.

In truth, the question at hand goes beyond that. This is about who would make crucial political decisions (and how) if the opposition bloc were to win next year’s elections.

Meral Akşener, the Good Party’s chairperson, says there is an effort to discipline her party using the HDP. She criticizes the ruling People’s Alliance, but it goes without saying that the actual pressure comes from the HDP and pro-HDP figures among the opposition ranks.

It is no secret that a significant part of the opposition’s mentors believe that the opposition cannot win next year without the HDP’s support. As such, they attempt to force the Good Party to make some critical decisions. Fully aware of the right-wing voters’ considerations, Akşener appreciates that securing the HDP’s open support would drive away the nationalists. At the same time, she understands that the People’s Alliance would exploit any attempt by the HDP to impose candidates and policy choices on the opposition bloc on the campaign trail.

More importantly, Akşener is concerned over where HDP’s policy and demands could take Turkey if that party were to become the seventh coalition partner in case the opposition bloc, which consists of six parties, wins next year’s presidential election. She appreciates the deep concerns among the electorate and the nationalist elite as well as the risk of Türkiye being pulled into a vortex of ungovernability.

At the same time, the Good Party chairperson has enough experience to know that the HDP will have more influence over the next administration than, say, Ankara Mayor Mansur Yavaş if CHP chairperson Kemal Kılıçdaroğlu runs and wins as the opposition’s joint candidate.

In a nutshell, Akşener’s statement mentioned above means: The HDP plays a role in disciplining not only the Good Party but also the CHP’s nationalist wing.

Again, does anyone need reminding that the HDP officials crossed out Akşener and Yavaş from the list of potential joint candidates? Let us also remember that the HDP and its former Chairperson, Selahattin Demirtaş, propped up Kılıçdaroğlu and Istanbul Mayor Ekrem Imamoğlu. In this sense, the latter could still make a move at the right time despite having been sidelined by Kılıçdaroğlu. Hence, the HDP’s influence over the opposition keeps getting stronger.

The CHP chairperson follows a two-pronged plan to clinch the opposition’s nomination. First, he built on the mayoral races in Istanbul and Ankara to highlight his ability to unite the various sections of the opposition. At the same time, he positioned himself as a potential candidate that could compete against President Recep Tayyip Erdoğan.

However, he undermined other potential candidates, including Akşener, Imamoğlu and Yavaş, in the process. The HDP certainly helped him get there, too.

Could Akşener reverse the opposition’s course with her latest moves? I certainly doubt that. She will probably give up, fearing that she will be blamed for “turning over the table.”

In recent months, Kılıçdaroğlu has made strongly worded statements, posed challenges, threatened the bureaucracy, attacked Erdoğan and even warned the CHP members to build his strongman persona.

As a matter of fact, Kılıçdaroğlu made political mileage for being the only opposition leader targeted by Erdoğan and started to refer himself as “Mr. Kemal” — the president’s nickname for the CHP chairperson.

What could happen if the opposition were to endorse Kılıçdaroğlu’s candidacy, however, does not receive sufficient attention. Obviously, that choice would not surprise anyone. Moreover, the competition between Erdoğan and Kılıçdaroğlu on the campaign trail would play out differently.

As a candidate, the main opposition leader would have an obvious weakness. The world will be dangerous and uncertain over the next years. There could be voters, even among the CHP and the HDP ranks, who Kılıçdaroğlu cannot govern under those circumstances and deem Erdoğan the better candidate despite everything. Let us also keep in mind those conservative-nationalist voters who would be worried about Kılıçdaroğlu and the HDP’s influence over Turkish politics.

Analysis: Latin American and Caribbean Perspectives on U.N. Reform | An Agenda
Next
Loading...
Loading...
We use cookies to ensure that we give you the best experience on our website. If you continue to use this site we will assume that you are happy with it.Ok