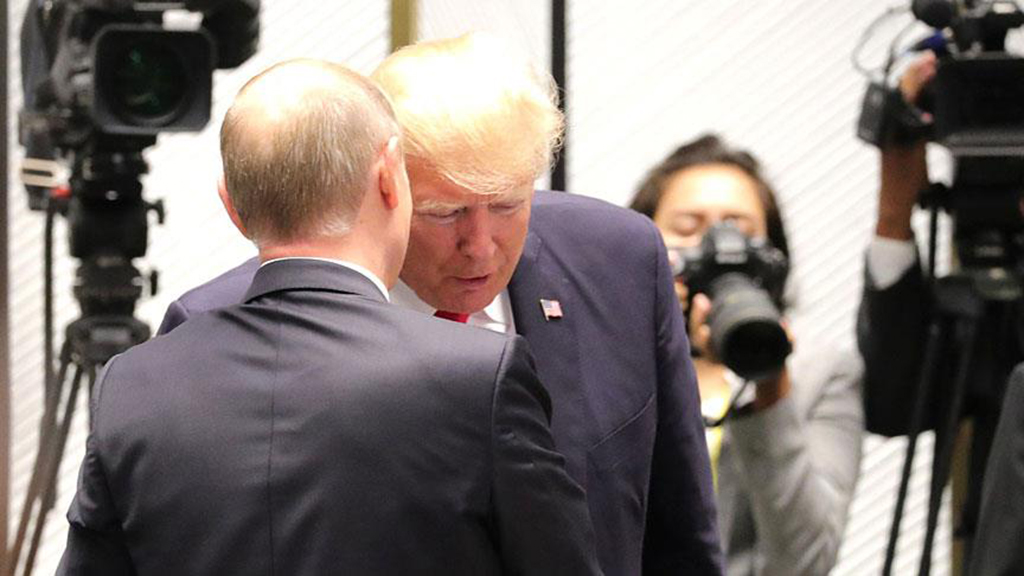 The quarrel between the U.S. and Russian presidents over the Assad regime's recent use of chemical weapons in Ghouta is furthering the chaos in Syria and escalating instability in the entire Middle East

Welcome back to the utterly unpredictable, inconsistent, untrustworthy and incoherent world of U.S. foreign policy, especially when it comes to the Middle East, conventionally perceived as the eternal locus of global conflict hotspots. It has been only two weeks since the latest announcement from U.S. President Donald Trump that the U.S. military being involved in Middle Eastern conflicts is futile and U.S. forces will soon withdraw from Syria. This initial announcement was not found realistic by many observers, including the author of this column who said that Trump was busy establishing a war cabinet reminiscent of the neoconservative team of President George W. Bush while paying lip service to the need to withdraw from Syria and other Middle Eastern conflicts. We also indicated that the collection of figures with Islamophobic, anti-diplomatic and pro-war positions at the core of the U.S. foreign policy establishment will not contribute to regional or global peace, but might instigate a recurrence of humanitarian calamities seen in recent years.

Nevertheless, following the Syrian regime’s use of chemical weapons on civilians in the suburb of Douma outside Damascus on April 7, several commentators in the U.S. accused Trump of inciting Bashar Assad for this massacre by prematurely announcing the possibility of a withdrawal. This was despite the fact that Trump’s previous statements on a U.S. withdrawal were perceived as political rhetoric aimed at relieving those opposing the U.S.’s military presence in Syria and not institutionally supported either by the Pentagon or the State Department. The chemical attack on the neighborhood of Douma in Eastern Ghouta on the outskirts of Damascus was carried out with the use of bombs filled with toxic chemicals, presumably as poisoned gas could seep into basements and underground defense lines. The evacuation deal that was reached between the regime and the rebels who have been holed up in Douma so far in the immediate aftermath of the attack strengthened claims that geostrategic priorities spurred the use of chemical weapons. Around 70 civilians lost their lives and at least 500 were affected by exposure to chemical agents. This attack, however, is only one minor example of the hundreds of conventional and chemical attacks perpetrated by the brutal Assad regime since the inception of the Syrian civil war. Therefore, expectations for a serious international reaction to the attack were quite slim. Right after his announcement on an imminent U.S. withdrawal from Syria, Trump’s response to the chemical attack was unexpected for international observers due to its tough language and swiftness in raising military tensions. Bypassing the U.S. security establishment and resorting to Twitter diplomacy yet again, Trump declared that he is holding Russia and the Syrian regime accountable for the attack, and “nice and smart” American missiles will be hitting Syrian targets. Reminiscent of his statement on a withdrawal, there was no confirmation from the Pentagon or State Department in support the president’s position, but even his tweets were enough to exert heavy damage to the Russian, Iranian and even Turkish financial markets. International investors rushed to transfer their capital investments from the region in anticipation of imminent U.S. missile strikes on Syrian targets. Meanwhile, the Russian ruble, Iranian rial and Turkish lira endured speculation in tit-for-tat war of words continued between Trump and his Russian counterparts.

While Trump tried to lower the tensions in subsequent tweets, Russia took the threats of U.S. missile strikes on the Syrian regime very seriously. To counter the mind games that Trump has been playing thanks to the U.S.’s massive military capacity, Russia declared that air defense systems, including state-of-the-art S-400 missiles, would be used against any potential U.S. missile strikes. While claims leaked that the U.S. has selected eight potential targets, including two airfields, a research facility and a chemical weapons facility, Russian sources hinted at counterattack on U.S. vessels. Concrete logistical steps taken by Moscow such as the transfer of Russian aircraft specializing in anti-submarine warfare to Syria and removal of warships from its naval bases in the country to ensure their safety in case of missile strikes were also pre-emptive measures.

As tensions escalate between the two nuclear superpowers and Syria turns into the epicenter of a new global turf war, mutual security policy coordination between the U.S. and Russia seems to have weakened unprecedentedly. Trump might be trying to please his domestic audience and balance Russia’s dominant position in Syria by playing tit-for-tat war games at every possible opportunity, but the perpetual continuation of military-strategic tensions in the region damages prospects of both regional and global stability.

Kosovo is only a beginning
Previous