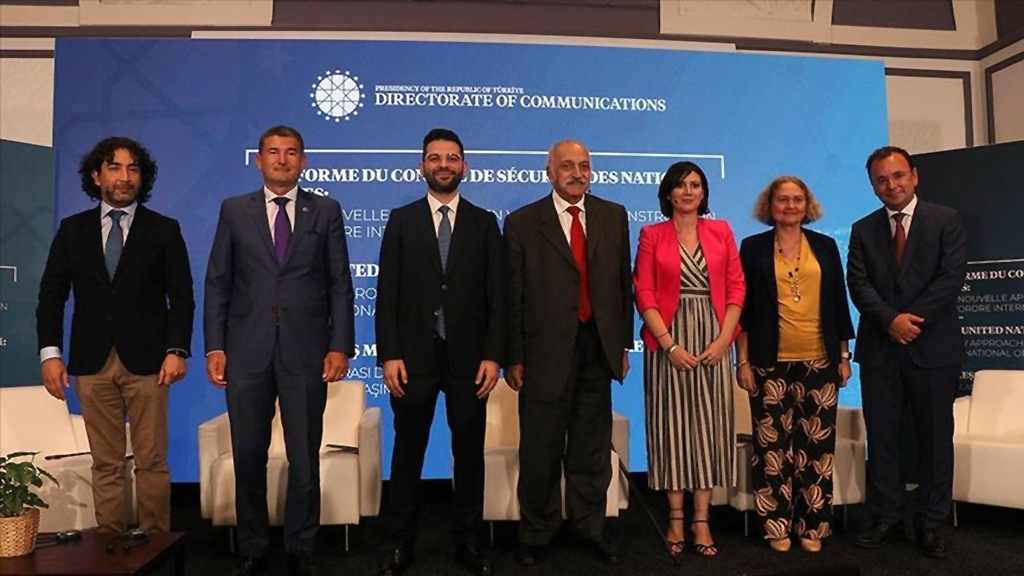 Many officials from Türkiye, including Deputy Director of Communications Cagatay Ozdemir, attended the panel along with diplomats from the Turkish Embassy in Paris. The panel was moderated by Washington Director of the Ankara-based Political, Economic and Social Research Foundation (SETA) Kilic Bugra Kanat and attended by panelists Presidential Security and Foreign Policy Committee Members Prof. Cagri Erhanand, Prof. Nursin Guney as well as President of the Association of Foreign Journalists (APE) Elias Masboungi and Italian scholar expert Valeria Giannotta.

Reform of UN Security Council is ‘not a choice but a necessity,’ think tank official says

Türkiye’s Communications Directorate held a panel in Paris to emphasize the critical need for a UN Security Council reform.

Many officials from Türkiye, including Deputy Director of Communications Cagatay Ozdemir, attended the panel along with diplomats from the Turkish Embassy in Paris. Kanat said that the reform of the UN Security Council is “not a choice but a necessity”.

The panel also aims to push for a fairer, more democratic and more representative structure in the Security Council.

After holding panels in Italy, Argentina and France, Kanat said they plan to organize panels in 10 more different countries within the next two weeks. Erhan, for his part, told the panel that the UN member countries increased from 51 to 193 and the world population was up from 2.5 billion to 8 billion.

“It is clear that we need a change because the UN system was established for a world 4 times smaller than the one we live in today.”

Guney, on the occasion, said there have been initiatives for the reform of the UN in the past, adding that the current system allows the five permanent members of the UN Security Council to use the veto “against human welfare” due to different national interests.

Giannotta said the current system at the UN Security Council, has proven to be ineffective in providing security and stability to the international system and in dealing with the crisis.

Russia-Ukraine war has proven once again “our inability as the international community to deal with the crisis”, according to Giannotta.

Masboungi, meanwhile, hailed Türkiye’s efforts to highlight the need for reform in the UN Security Council.

Stories Matter, Not Numbers: The Ongoing War on Palestine
Previous

Western way of resolving regional crises: The Cyprus issue
Next
Loading...
Loading...
We use cookies to ensure that we give you the best experience on our website. If you continue to use this site we will assume that you are happy with it.Ok