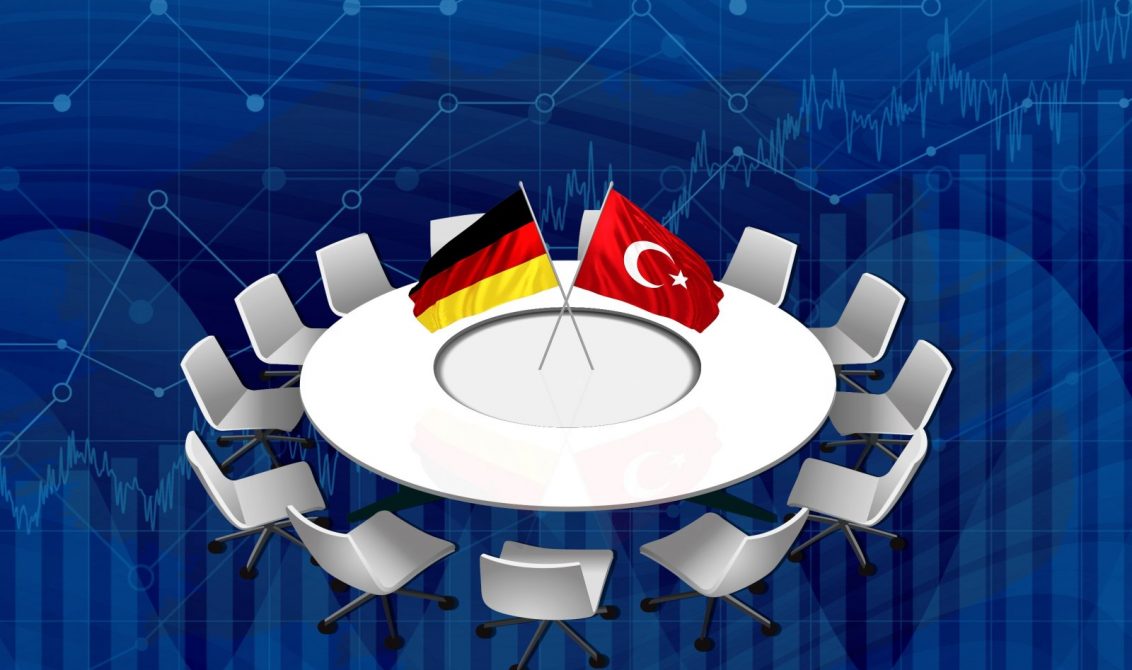 A photo illustration by Daily Sabah's Büşra Öztürk shows the flags of Turkey and Germany, symbolizing the relations of the two countries. 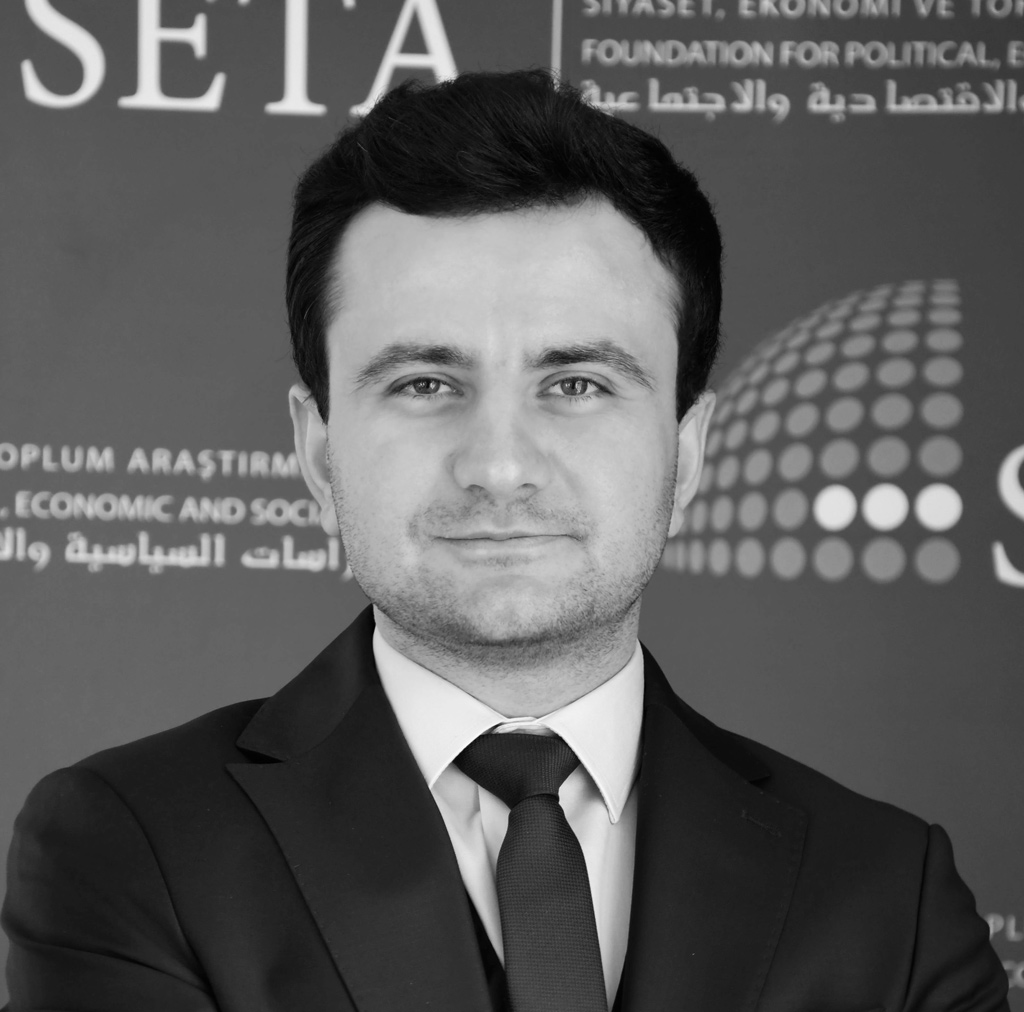 he close economic relations between Turkey and Germany are based on solid ground and have continued to thrive independently of the political issues between the two countries. Parallel to the rapid increase in European trade with the East since the second half of the 19th century, Turkish-German trade also gained significant momentum. Mutual German-Turkish interests in the construction of the Baghdad Railway starting from Istanbul’s Haydarpaşa neighborhood and the last German kaiser (emperor) and king of Prussia, Wilhelm II’s visit to Istanbul in 1898 played an important role in the expansion of bilateral economic relations. In memory of this visit, Wilhelm II gifted a fountain to the sultan and Istanbul. The fountain, known as the German Fountain and located across the Tomb of Sultan Ahmed I in the Sultanahmet Square in Istanbul today, was made in Germany and then brought to Istanbul.

While Germany was trying to recover after World War I, Adolf Hitler appeared on the political scene and in 1933, the National Socialist dictatorship was introduced to the country. Numerous German academics fled to Turkey to survive, which strengthened the ties between the two countries in scientific areas as well as the economy.

Another cornerstone of the economic relations between Turkey and Germany is Turkey’s application for partnership in 1959 to the European Economic Community (EEC), of which Germany is one of the six founding members.

This treaty, also known as the Ankara Agreement, also forms the legal basis of the relations between Turkey and the European Union. The agreement is planned as a partnership agreement that will be valid until the conditions for Turkey’s membership in the EEC are fulfilled. However, the trade relations between Turkey and Germany continued to improve, taking into account Turkey’s compliance with the EEC. A labor transfer agreement was signed between the two countries on Oct. 30, 1961, to meet the employment demands of Germany, which had started the recovery initiatives post-World War II. Hundreds of thousands of Turks who went to Germany as “guest workers” settled in the country over time, established their own companies and ultimately provided employment opportunities. These companies significantly contribute to economic growth and create employment for hundreds of thousands of people in Germany.

With the reunification of Germany by end of the Cold War, the relations with Turkey evolved to a different dimension. The parties that have developed a culture of cooperation in the fields of military, economy and security through NATO, the EU free trade agreement and the Organization for Security and Co-operation in Europe (OSCE), respectively, nowadays prioritize joint ventures in different sectors. Tourism is another important dimension of the economic relations between the two countries. In 2020, approximately 70% fewer tourists visited Turkey due to the effects of the global pandemic. However, in 2019, German tourists were the third-largest group visiting Turkey, accounting for 1.1 million people. Thanks to these historical and economic ties, Turkey and Germany – as two important partners – have significant roles in the region. These historical economic ties inspire cooperation.

Over 74,000 foreign companies from 182 countries operate in Turkey, and the country has the largest manufacturing industry in Western Asia. It has become a production hub of the region with its export capacity, production and adaptation potential and conducts most of its trade with Western Europe.

Germany, France and Italy come to the forefront in foreign trade, while the Netherlands, Austria and the U.K. take first place in domestic investments in Turkey. The Netherlands has the highest foreign direct investment stock in Turkey, while Germany ranks fifth with $14.5 billion (TL 140.73 billion). Turkey, on the other hand, has an investment stock of $2.7 billion in Germany. While Berlin has invested in the manufacturing industry, energy and finance sectors, Ankara’s investments are concentrated in the industry. However, more than 80,000 entrepreneurs of Turkish descent in Germany form an economy worth over $52 billion. In Turkey, more than 7,200 German firms make up nearly 10% of the total foreign companies. With a similar share in Turkey’s total foreign investment stock, Germany seems willing to increase its green energy investments. Similarly, Ankara is also leaning toward renewable energy in its investments in the energy sector. The fact that both countries consider the green economy important indicates a possibility of cooperation in the current sector.

The size of the investments between the two countries is closely related to the expansion process of foreign trade relations. With Germany’s demands in terms of the product supply chain, cost advantage and transportation infrastructure, Turkey accounts for exports worth $7.5 billion from the country. While Germany’s investments in Turkey provide employment opportunities for more than 70,000 people. In addition, Turkey, which is one of the important vacation destinations for German tourists, hosts millions of tourists. The extent of the investment relations is not restricted to the two countries only. The Ankara and Berlin administrations also carry out collaborations on investments in other countries.

Especially in Africa, economic cooperation can contribute more to the development of the continent. In the region, Turkey and Germany have investment stocks of $8 billion and $13 billion, respectively. Investments in Africa, which are at a low level compared to other countries, can help bring up bilateral cooperation to the international level. Medium- and long-term projects, investments and aids involving all parties can contribute significantly to achieving the external equilibrium desired by the continent.

In 2020, Turkish exports to Germany totaled $14.85 billion, making Germany the country’s top export destination. Exported products are listed as textiles ($3.15 billion), vehicles and parts ($2.38 billion), machinery and boilers ($2.21 billion), iron and steel ($719 million), and others. Turkey’s imports from Germany amount to $20.64 billion, and it is Berlin’s second-largest import partner. Imported products are machinery and boilers ($4 billion), vehicles and parts ($3.93 billion), electrical machinery and equipment ($1.82 billion), plastics and products ($1.41 billion), etc. Compared to previous years, we can see that foreign trade has achieved a more balanced structure but is yet to reach the desired level.

How it should look

Despite the political differences, it is reasonable to conclude that economic relations have continued to develop and have become an important factor between the two countries. In particular, all parties are negotiating and are open to cooperation in areas such as controlling the flow of refugees and maintaining stability in West Asia.

As with investments, the expansion of Turkey’s foreign trade with Germany and approaching it with a new concept, despite the shortcomings of the customs union, would contribute to balancing. Foreign investments and projects, constituting another pillar of Turkish-German cooperation, have an important place. The Turkish-German partnership may reveal a new approach, especially in regions such as Latin America and Africa.

Foreign investments and projects, which are another pillar of Turkish-German cooperation, have an important position. Especially in regions such as Latin America and Africa, the Turkish-German partnership may bring new opportunities and approaches. For Turkey, Latin America is an untapped region in terms of foreign trade, investment and opportunities. On the other hand, due to its population and economic potential, Germany has been active in the region for many years. Turkey’s position in Africa and West Asia also provides opportunities for German-Turkish joint ventures in this respect.

The two countries have in-depth experience of carrying out joint ventures. The common presence of Turkish-German companies in Turkey and Germany and the creation of employment reflect this experience. Considering the German investments in Turkey, it is not difficult to expand the cooperation in different fields. The dialogue between the parties, especially on refugees, points to opportunities for cooperation. The experience of development initiatives in Germany and Turkey may also lead to historical processes in underdeveloped and developing regions. As a result, Turkish-German cooperation can bring many opportunities in regions such as West Asia, Africa and Latin America. In addition, common foreign trade, investment, projects and initiatives show the existence of the current cooperation infrastructure.

Nationalism, Kurdish question and opposition in Turkey
Next
Loading...
Loading...
We use cookies to ensure that we give you the best experience on our website. If you continue to use this site we will assume that you are happy with it.Ok