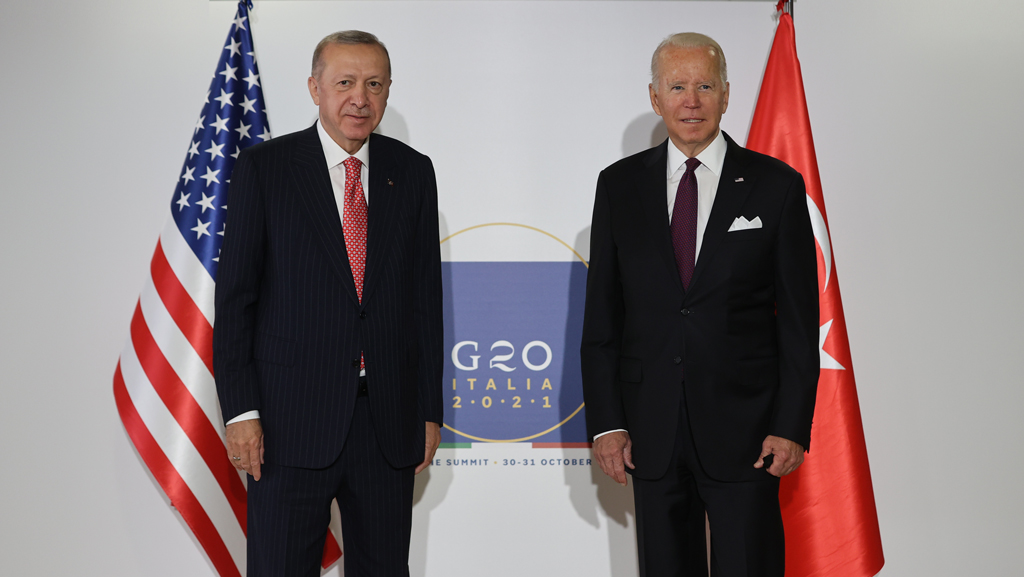 Experts Respond: Erdoğan-Biden Meeting and Its Impact on Turkey-U.S. Relations

SETA reached out to experts for their opinions on Erdoğan-Biden meeting and its repercussions on the future of bilateral relations.

President Recep Tayyip Erdoğan met with U.S. President Joe Biden on October 31, 2021, on the sidelines of the G20 Summit in Rome, Italy. The leaders discussed several issues and shared messages to strengthen and improve bilateral relations.

SETA reached out to experts for their opinions on this meeting and its repercussions on the future of bilateral relations.

The Biden-Erdoğan Meeting May Be a Critical Turning Point

The Biden-Erdoğan meeting on the margins of the G20 Summit in Rome may be an important turning point in overcoming the stalemate in Turkish-American relations as long as the Biden administration stays true to the spirit of the meeting. As it is known, at the end of the talks, the parties decided to meet frequently at the ministerial level in many other fields as well as to strengthen ties between the U.S. and Turkey in the trade and economic sectors by establishing a partnership mechanism. Hence, it is clear the Washington and Ankara administrations wish to resolve the existing problems through consultation with a new dialogue mechanism. Therefore, at the G20 Summit, the presidents of the U.S. and Turkey put forward a new political will to overcome the crisis of confidence between them.

Of course, no one expected the many entrenched problems between Washington and Ankara to be settled immediately during this meeting. What is important at this point is that the sides have declared their will to solve the problems between them by having this face-to-face talk at the Summit. In addition, thanks to this new line of dialogue to be established, the parties will try to prevent points of disagreement that create serious risks, and they will be able to push for an opportunity to cooperate on subjects relative to their common interests. Hence, this joint mechanism accepted at the G20 Summit can easily be compared to the exploratory talks between Turkey and Greece. Considering that the current U.S.-Turkey file is quite thick, it’s expected that the parties will meet on multiple occasions through the joint mechanism from now on.

Therefore, setting up a new line of dialogue between the U.S. and Turkey at the G20 Summit in Rome has emerged as an important opportunity in terms of mending the strained ties in the Washington-Ankara line. It is hoped that this new confidence-building mechanism is employed quickly and dominated by a spirit of alliance to achieve an equal level of relations in Turkish-American ties.

Security as the Main Dimension of Turkish-American Relations

Right after the Biden-Erdoğan meeting on Turkish-American relations, one issue that should be emphasized is the distrust between the two countries. It is difficult to make progress on other issues before this problem is solved. Apart from that, the US and Turkey, two countries in the same security pact as NATO members, have reduced rather than boosted mutual support regarding their defense systems to the point of harming both bilateral relations and the southern wing of the Alliance. However, Turkey’s border security is NATO’s border security; security sensitivities we experience on the Syrian and Iraqi borders will also harm the southern flank of the Alliance. Turkey is forced to solve its own security problems. I wish Turkey could have resolved these problems with the support of its allies.

On the other hand, the development and diversification of commercial relations between the two countries are at a level that can be a source of reference for the solutions of many problems. Turkey – particularly in the textile sector – has a very large infrastructure. I think it should be put to good use. I also think other issues play a role in this and that it is necessary to evaluate the issues related to the Fetullah Gülen Terrorist Organization (FETÖ) within this security framework. Similarly, it can be said that the issues related to the S-400 defense system are also related in this regard.

As a result, I believe Turkey’s security will be an initiative that will serve and benefit the security of both Europe and the West.

The Importance of Establishing a Joint Mechanism

Even if the meeting between Presidents Erdoğan and Biden in Rome has not yielded very concrete results in terms of content, it is important for the course of relations between the two countries. Turkish-American relations have been shaped by crises and tides since mid-2013 and have not been put on the desired track. The military and political support provided by the U.S. to the PYD [in Syria], Washington’s reluctance to take concrete steps in the fight against FETÖ, Turkey’s removal from the F-35 program on the pretext of the [Russian] S-400 air defense systems, the Halkbank case and many similar crises have cast a shadow on Ankara-Washington relations.

Although the sides had conducted consultations for taking constructive steps in bilateral relations during the presidency of Donald Trump, institutional actors in Washington resisted normalizing relations with Ankara. The Pastor Brunson case, Turkey’s  operations against the PYD in Syria and the CAATSA sanctions have further deepened the ongoing crises. So, in this period as well, the relations were mainly based on an approach for crisis management.

The statements of the ambassadors of 10 Western countries – the U.S. in particular – to Turkey came to the agenda in recent days and have created a new crisis. President Erdoğan and President Biden’s thematic meeting held in this atmosphere is quite remarkable. This can be defined as an important stage not in terms of solving the problems between the two countries, but for the course for bilateral relations. It would be accurate to consider this transformation a transition to a level where problems are managed with a common mechanism in continuous crisis management. For now, it remains unknown to what extent this [newly created] mechanism will be effective; however, it would be accurate to define the decision to set up the problem management mechanism as an important achievement because Turkey has supported setting up this mechanism for years, but it had not been taken into consideration by the U.S. In the near future, we will wait for the mechanism to work and make progress toward solving the problems.

The Erdoğan-Biden meeting was important as it stopped the escalating tension in Turkish-American relations. Having this meeting right after the 10 ambassador crisis and deciding to establish a joint mechanism to facilitate the solution of the problems ended the expectations of those who were waiting for a divorce. There are serious problems and very important points of disagreement between Turkey and the U.S.: the U.S.’ support of the YPG and the PKK, the FETÖ issue, the S-400 issue and of course, the destructive activities of the lobbies that affect American foreign policy. These are all difficult issues to overcome. Despite everything, discussing the issues that will strengthen relations, focusing on common interests and working on other areas in the Biden-Erdoğan meeting have revealed that both sides are willing to protect and develop relations.

In particular, it was critical that the F-16 issue was discussed and that Turkey requested the U.S. understand the choice Turkey has made in this direction. Again, President Erdoğan’s request for the support of his American counterpart for the purchase and modernization of the F-16s and the fact that he was not met with a negative response showed that cooperation in the field of defense can continue, though limited. Despite the negative campaign of international media and some think-tanks, I think it was an important meeting because showed that the door for dialogue is open between the two leaders.

The Importance of the Steps to Be Taken in Defense Cooperation

The second face-to-face meeting between President Erdoğan and U.S. President Biden was held at the G20 Summit in Rome after another crisis, just after the 10 ambassador crisis. Since the Biden administration prefers inter-institutional communication, there have been few face-to-face meetings between the leaders. But the issues in the Turkish-American relations – whether they are in the areas of disagreement or cooperation – make these meetings necessary. Although Turkey had proposed the establishment of a joint mechanism to bring together the treasury, finance and foreign ministers outside of the existing channels (meetings at the level of diplomats or leaders), both sides now seem to have agreed on the subject. A joint mechanism can provide the necessary environment for healthier progress in Ankara-Washington relations, the management of conflicts before they turn into crises, and for further progress in areas where cooperation can be made.

Another detail that drew attention at the meeting was the U.S. administration’s emphasis on Turkey being a “NATO ally.” This emphasis demonstrates that Turkey is not defined as a “strategic partner” and that the type of relationship between the two countries is defined as “NATO ally.” However, as an important NATO ally, Turkey’s strong air force means a strong southern flack for NATO. In this respect, the resolution of the conflict over the F-35s and the delivery of F-16s will be a test for the United States. In short, the steps to be taken in defense cooperation will play a key role here. It is also important in this sense that conflicts are somehow overcome. Steps to overcome the crisis of trust between the parties will contribute to the resolution of many disputes.

Turkish-German relations: Inevitable cooperation
Next
Loading...
Loading...
We use cookies to ensure that we give you the best experience on our website. If you continue to use this site we will assume that you are happy with it.Ok