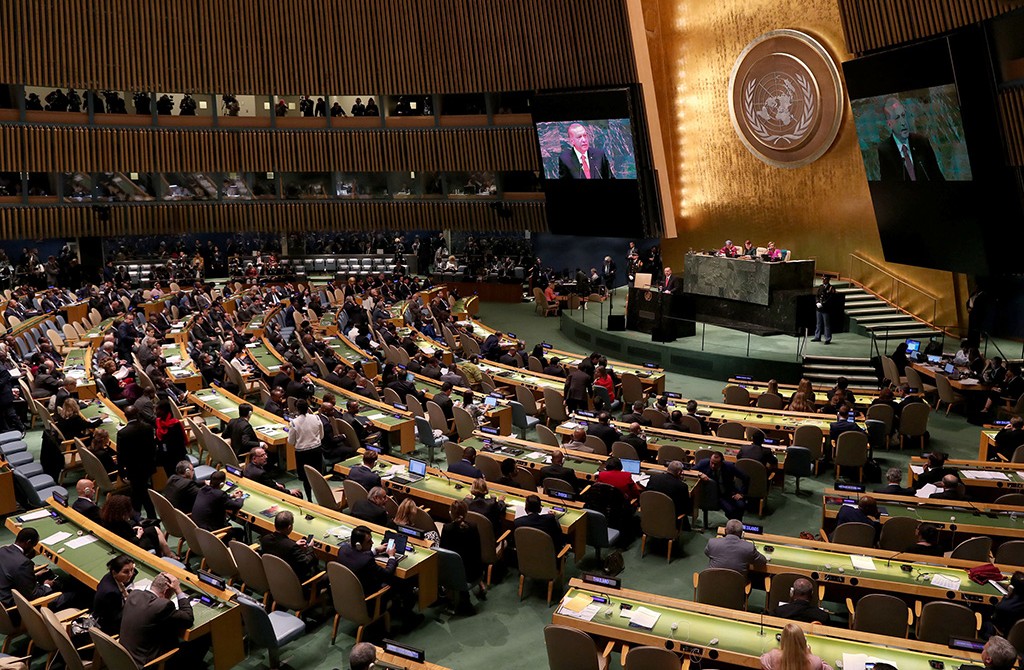 Erdoğan addresses the 73rd Session of the UNGA, New York, Sept. 25. Erdoğan re-emphasized his famous motto against the U.N. system, "the world is bigger than five," criticizing the hegemony of the five permanent UNSC members over the organization.

Turkey's purpose at the U.N. summit was to draw global attention to the alarming fact that the liberal world order is beginning to disintegrate

In an op-ed in Foreign Policy, President Recep Tayyip Erdoğan wrote that countries around the world should unite to prevent the fall of the liberal international order. This is not the first call from a world leader to protect the international system and the unraveling of the order. However, there are two significant dimensions of President Erdoğan’s call.

First, for several years, Turkey has been asking for reform of existing international institutions, most notably the U.N. Security Council. During his address to the U.N. General Assembly last week, President Erdoğan reiterated the necessity to reform the organs of the U.N. to make it “more relevant.” In fact, although there are others who criticize the U.N. and the existing liberal order, we don’t see critical voices consistently pursuing the agenda and making it a significant part of the countries’ foreign policy. But given the failure of the U.N. Security Council to stop conflicts around the world, this should become a priority for members of the international community. Turkey’s persistence in bringing this issue to the agenda is very significant and has to be endorsed by countries that emphasize the inequality in the structure of the U.N.

A second major issue that President Erdoğan raised in his op-ed is that it is the United States that is mostly undermining current international institutions. Most of these institutions and mechanisms were formed by the leadership of the U.S. and other Western countries after World War II. There have been serious threats to these institutions, but it cannot be as destructive as U.S. attacks on them. As mentioned by several observers of international politics and emphasized by President Erdoğan, the liberal order can only survive these attacks if other countries contribute to the survival of the system. This would necessitate an important degree of burden sharing.

Taking responsibilities not only in governance but also in terms of providing funding and spending efforts to fulfill the missions of the organizations are critical. In multiple instances, Turkey has tried to fill the gap left and neglected by these institutions and help those in need individually by itself. Considering the intensity and urgency of the humanitarian crises and civil wars in different parts of the world, a community of nations needs to act together to fill these voids. Not only in areas where the U.S. administration is withdrawing but also in areas the U.N. system cannot reach or afford, these nations need to step up and take responsibility.Both of these points once again remind people that the new period in the international system will be much more complicated and the role of countries in this new system will be extremely important. While pressuring the U.N. system to reform itself and unite in these efforts, countries also need to work together to play a leadership role in dealing with emerging challenges and threats around the world. The ambivalent U.S. position in regards to the international system and its role should not discourage the community of nations but instead encourage them to play a more prominent role. For the last several years, Turkey has played an important role in calling on nations to act. Now it is important for other nations to realize this reality and act accordingly to save the world from another period of conflicts and disasters.

In the age of Trump, Erdoğan represents a new vision
Next
Loading...
Loading...
We use cookies to ensure that we give you the best experience on our website. If you continue to use this site we will assume that you are happy with it.Ok