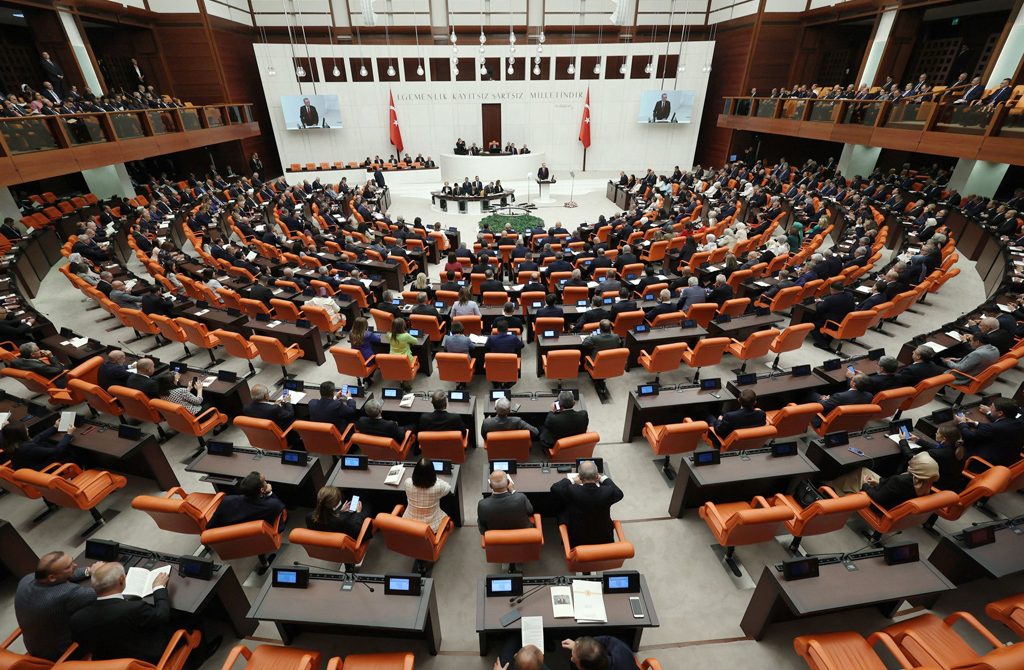 The debate over the Republic in Türkiye

The elections in Türkiye will coincide with the Republic’s centennial represents a theme that the various political parties and candidates will use on the campaign trail.

That next year’s elections in Türkiye will coincide with the Republic’s centennial represents a theme that the various political parties and candidates will use on the campaign trail.

Earlier this week, President Recep Tayyip Erdoğan said that “Türkiye’s Century” will be his reelection campaign’s motto. As the ruling Justice and Development Party (AK Party) gets ready to unveil its vision document and campaign statement, the opposition bloc known as the “table for six” remains preoccupied with their internal debate over presidential candidates and the transition process.

Recalling that the main opposition Republican People’s Party (CHP) issued a “statement of a call for the second century” at its 37th Ordinary Congress some two years ago, however, it would not be surprising for the opposition to build its campaign on the Republic’s second century.

At the end of the day, voters demand from candidates and parties a certain vision for the future – a story. One could argue that it is a positive development for campaign stories to focus on embracing the Republic and feature inclusive statements. Nonetheless, we have every reason to expect the People’s Alliance and the table for six to use that theme in a second way.

In this regard, it won’t be surprising for either side to talk about the current state of the Republic and where it’s headed or to criticize and compete with each other.

The references to our nation’s recent political history, which serve to paint a picture of the present and provide insights into the future in many key areas like foreign policy, national security and the economy, will further diversify the ongoing debate over which republic is most desirable.

The latest case in point was President Erdoğan’s address at the Economic Transformation and New Paradigms Summit at Dolmabahçe Palace on Friday: “Türkiye found it most difficult to develop its economic policy a century ago, as it transitioned from a massive 600-year-old empire into its current borders. Over the last century, the causes and consequences of all the problems that we experienced have been linked to the economy. Upon coming to power, we launched a comprehensive reform program to address our country’s century-old shortage of democracy and infrastructure. Across the board, we took a series of steps that rebuilt our country from scratch.”

Certainly, Erdoğan’s references to “a century’s worth of action” and “rebuilding” could apply to many policy areas.

All the different ideological/political currents in Türkiye have a distinct interpretation of Ottoman-Turkish modernization. As a matter of fact, those differences of interpretation extend to alternative accounts of the history of how the War of Independence was fought and what happened in its aftermath.

The CHP’s Kemalist interpretation alienates the Ottoman Empire and glorifies the single-party period without exception.

The Democratic Party, which toppled the single-party regime in 1950, and its successors, together with the National Outlook movement and the right-wing (including the Nationalist Movement Party), fiercely criticize the CHP’s Jacobinist legacy. Those political movements view themselves as having challenged the bureaucracy’s guardianship to put the popular will into practice.

As the right-left distinction becomes ambiguous, it becomes possible to witness various political parties make contradictory remarks on the history of the Republic.

Let me take this opportunity to bring to your attention a certain section of a recent interview with Meral Akşener, the Good Party (IP) chairperson, where she said that the opposition bloc was “not a notary public.”

In her critique of the AK Party, Akşener suddenly complained that “we live in the Türkiye of 1938 and 1945” and likened the table for six to the Democratic Party’s 1947 Pact for Liberty. Making a reference to the Republic’s earlier decades, the Good Party leader excluded Mustafa Kemal Atatürk’s presidency (1923-1938) yet criticized the period between 1938 and 1950 – when Ismet Inönü ruled the nation as “the national chief.”

To be clear, that approach has become a generally accepted view among many political parties. The most problematic aspect of Akşener’s critique, however, was her attempt to draw parallels between the Inönü years and the successive AK Party governments. After all, it does not make a lot of sense to compare the CHP’s legacy of authoritarianism and single-party rule with the AK Party, which pushed back against the Kemalist guardianship for two decades. Moreover, it is particularly problematic to make such comparisons as part of the opposition bloc, which the CHP (frequently admitting to having failed to change) continues to dominate.

It almost sounds like Akşener wanted to remind her coalition partner, CHP, of its controversial past. Doesn’t Erdoğan often accuse the main opposition party of having failed to part ways with Jacobinism anyway? Yet the Good Party stands with CHP and the Peoples’ Democratic Party (HDP). Furthermore, its chairperson makes accusations against the AK Party, which traces its lineage back to the Democratic Party – that famously said “Enough! The people will speak!” – with reference to the CHP’s single-party rule.

Obviously, making such references to contemporary history would only hurt the CHP and the Good Party’s popularity and play into the hands of the People’s Alliance.

Let us see what kinds of interesting comparisons will come up over the course of the debate over the Republic on the campaign trail.

The core question is the future of 'table': İP or HDP?
Previous

Dangerous escalation in the Ukraine-Russia War after annexation
Next
Loading...
Loading...
We use cookies to ensure that we give you the best experience on our website. If you continue to use this site we will assume that you are happy with it.Ok