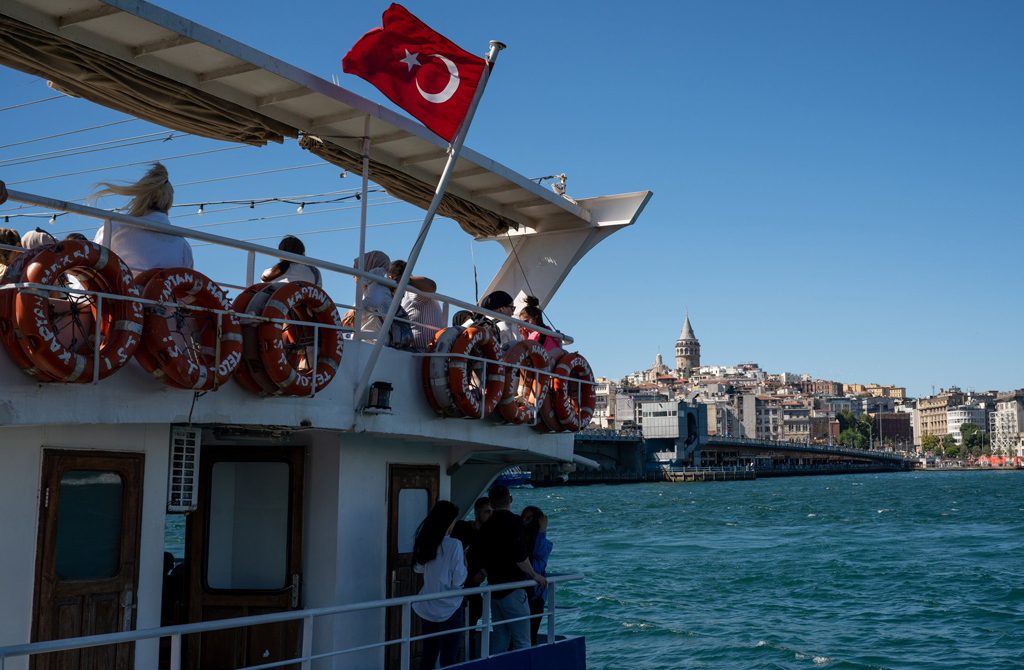 People are seen at a Bosporus ferry with the Galata Tower seen in the background, in the downtown of Istanbul, Turkey, July 3, 2022. (Reuters Photo)

The debate on whom can govern in Türkiye

The main source of disagreement between Türkiye's government and the opposition relates to which side could govern better. Alternatively, it is about the claim that the opposite side cannot govern properly. As Türkiye inches toward next year’s elections, that theme dominates domestic politics week in and week out.

The main source of disagreement between Türkiye’s government and the opposition relates to which side could govern better. Alternatively, it is about the claim that the opposite side cannot govern properly. As Türkiye inches toward next year’s elections, that theme dominates domestic politics week in and week out.

Most recently, the opposition criticized a trilateral memorandum that Türkiye signed with Sweden and Finland at the NATO summit in Madrid, where President Recep Tayyip Erdoğan pushed the countries to accept Turkish demands. According to the six opposition leaders, which met for the fifth time on Sunday, the government failed to receive “concrete assurances” regarding Türkiye’s demands. For the record, hardly anyone is surprised that the opposition leaders stick to their negative views, even though the Greek, Swedish and Finnish media recognize the Turkish president’s skill at leader-to-leader diplomacy.

It would have been better for the opposition to set aside its fear of “helping Erdoğan” and publicly support Türkiye’s national security interests within the framework of the fight against terrorism. Having failed to take that step, they remain unhappy with the government’s ability to manage various foreign policy and security issues. Indeed, they reacted with similar aggression to Türkiye’s policy of normalization with Middle Eastern states.

Judging by the high inflation in Türkiye, which is accompanied by global economic challenges, the pro-opposition commentators argue that the government cannot determine the outcome of next year’s election. From their perspective, the opposition’s performance will be the true game-changer. Ironically, the electorate tends to compare what the government delivered and the opposition’s pledges before making its decision. In doing so, it evaluates the government’s performance in four key areas: foreign policy, national security, the economy and questions of national identity.

Another important point is that the main opposition Republican People’s Party’s (CHP) performance in local government, too, will be part of the discussion on the campaign trail. The CHP-affiliated mayors of Istanbul and Ankara have not accomplished anything noteworthy over the last three years. They can no longer account for that failure by saying that the central government has denied opportunities to those municipalities.

The Turkish people will not only evaluate Erdoğan’s track record of 21 years but also ask whether the opposition’s candidate(s) can actually govern the country. That remains a problem area for the opposition: The “table for six” is still trying to develop a “road map for the election’s aftermath” and pick a joint candidate. Here’s the kind of candidate they hope to find: Someone that can clinch a first-round victory with a significant margin. Someone who can become a symbol. Someone who can work with all six opposition leaders and follow their road map.

Needless to say, the opposition makes the situation more challenging by expanding the definition of an ideal presidential candidate. It almost seems that they make it more likely for multiple opposition candidates to contest the election simultaneously. Their ideal candidate is supposed to be high-profile so that they can defeat Erdoğan, but someone who will also allow the six opposition leader to exercise their powers once in office. At the same time, that candidate is supposed to sell the people on the opposition leaders’ road map and implement it too. In other words, the opposition is looking for a candidate that can simultaneously act like a president elected under the presidential and parliamentary systems.

Having postponed their decision about the joint presidential candidate, the six opposition leaders cannot seem to present an ambitious plan to the people either.

Others account for the opposition’s lack of skill by complaining that the central government does not give them enough space. Ironically, the main opposition leader, Kemal Kılıçdaroğlu, does not seem to have any problem making headlines every day by making fresh claims. The main reason why the opposition lacks enough space is its inability to present a joint plan and candidate to the electorate. To blame that particular problem on the government is nothing but childish.

To have additional room, the opposition needs to explain what it intends to do regarding the PKK/YPG presence in Syria, the repatriation of asylum-seekers and the Kurdish question. In this sense, it is not the government, but the ideological differences among the six opposition parties that stand in the way of the “table for six” presenting “a comprehensive democratization program” to the people and outlining how they intend to “build the Türkiye of tomorrow.” Obviously, the voters already know that those ideological gaps are just too wide to allow the opposition bloc to govern the country.

Let me add that the opposition’s attempts to “securitize” the election in the name of “election security” does not contribute to Turkish democracy in any way. The claims that the ruling party “won’t recognize the election results” or “transfer power” are nothing but components of a broader disinformation campaign. In contrast, accusing the people that “reelecting this government would make it more authoritarian” merely amounts to threatening the People’s Alliance that “we won’t let you govern even if you win the election.” The bottom line is that the ballot box is a single force that no government or opposition party could possibly withstand.